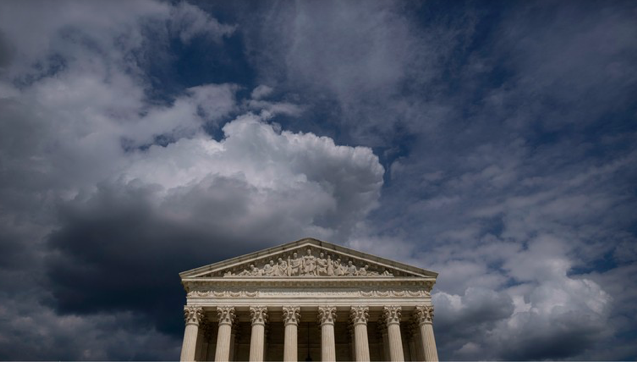 COURT EXPANSION -  as Chief Justice in 2005, the U.S. Supreme Court has handed down a spate of transformational ultra-right decisions on a dizzying array of subjects, including voting rights, gerrymandering, union organizing, the death penalty, qualified immunity for police, gun control, campaign finance, and most recently, abortion.

Liberals and progressives have little choice but to move forward with efforts to reclaim the court and bring it in line with the values and needs of a multicultural democracy in the twenty-first century.

With their solid 6-3 majority, the court's conservatives are emboldened to wreak even more Constitutional havoc in the future. They are armed with the power of judicial review, which permits them to overturn popular legislation and prior precedent decisions at will. And with only occasional lapses, they adhere to the doctrinaire legal philosophy of "originalism," which asserts that the answers to contemporary questions are to be found by guessing what the Constitution's language meant to its Framers and readers in the late eighteenth century.

Though the Democrats are partly responsible for allowing the court to be taken over by the right, this is not the time for recriminations. Liberals and progressives have little choice but to move forward with efforts to reclaim the court and bring it in line with the values and needs of a multicultural democracy in the twenty-first century.

The most efficient way to counter the current rightwing domination of the court is to expand the number of justices, placing more liberals and moderates on the bench. Even if there is little prospect of this happening any time soon, the idea of court expansion as a political remedy to rein in an unchecked judiciary is nothing new; it's actually an old idea that has taken on new urgency.

The issue of court expansion is addressed in the 294-page draft final report of the Presidential Commission on the Supreme Court of the United States, which was released on December 7. Established by President Joe Biden in response to the rising public clamor for court reform, the commission consists of thirty-four Constitutional law experts—including both liberals and conservatives.

Unsurprisingly, given the scope of its charge and its composition, the commission failed to make any recommendations on court expansion, or on implementing any other major structural changes to the court. Nonetheless, the report contains a surprisingly readable account of the Supreme Court's history and offers a useful summary of past efforts to alter the court's size.

The Judiciary Act of 1789 established a six-member court, consisting of one Chief Justice and five Associate Justices. Throughout the nineteenth century, Congress changed the court's composition six times, expanding or contracting the court, as the report explains, "for both institutional and political reasons."

In April, the Judiciary Act of 2021 was introduced in both houses of Congress. If enacted, it would expand the court to thirteen justices.

In 1801, John Adams and the Federalists, with only weeks left in power, reduced the number of justices to five in response to the election of Thomas Jefferson, a Democratic Republican. The following year, the new Democratic Republican Congress reversed the move and restored the court to six members. In 1807, Congress expanded the panel to seven justices, and in 1837, the number was increased to nine.

Echoing some of today's controversies, the report devotes considerable attention to the intense conflicts between President Andrew Jackson and Chief Justice John Marshall over the scope of the Supreme Court's authority. In 1837, two years after Marshall's death, the court was enlarged to nine justices in one of Jackson's last acts before leaving office.

All told, during his eight years in office, Jackson appointed six Justices. Foremost among them was Roger Taney, who authored the majority opinion in the infamous Dred Scott case of 1857 that held Americans of African descent could never be citizens. The Dred Scott decision was one of the factors that precipitated the Civil War.

The report also addresses the rapid series of changes to the size of the court that occurred both during and immediately after the Civil War, as the number of Justices grew to ten in 1863, contracted to seven in 1866, and returned to nine in 1869.

The court has remained at nine members ever since, withstanding both President Franklin Delano Roosevelt's "court-packing" plan of 1937 that was crafted to blunt the court's initial opposition to the New Deal, and rightwing calls to restrict the court's power in reaction to the civils rights movement of the 1950s and 1960s.

There is nothing sacrosanct, however, about the number nine.

In a Washington Post op-ed published on December 9, Harvard Law School Professor Laurence H. Tribe and retired federal district court judge Nancy Gertner, both of whom served on the Biden Commission, explained that they once opposed court expansion but came to change their views.

"We now believe that Congress must expand the size of the Supreme Court and do so as soon as possible," Tribe and Gertner wrote. "We did not come to this conclusion lightly."

Tribe and Gertner cite three basic reasons for their shift in position:

"[F]irst, the dubious legitimacy of the way some justices [referring to Neil Gorsuch and Amy Coney Barrett] were appointed; second, what Justice Sonia Sotomayor rightly called the 'stench' of politics hovering over this court's deliberations about the most contentious issues; and third, the anti-democratic, anti-egalitarian direction of this court's decisions about matters such as voting rights, gerrymandering, and the corrupting effects of dark money."

"Those judicial decisions haven't been just wrong; they put the court—and, more important, our entire system of government—on a one-way trip from a defective but still hopeful democracy toward a system in which the few corruptly govern the many, something between autocracy and oligarchy. Instead of serving as a guardrail against going over that cliff, our Supreme Court has become an all-too-willing accomplice in that disaster."

In April, the Judiciary Act of 2021 was introduced in both housesof Congress. If enacted, it would expand the court to thirteen justices. The House version of the bill currently has forty-three co-sponsors, and their ranks can only be expected to grow as the court's conservatives do more damage to what remains of our democracy.

We can do our part to support the legislation by making court expansion a central focus of our wider political discourse as well as a campaign issue in the 2022 midterms and again in 2024—or however long it takes to get the job done.

(Bill Blum is a former administrative law judge and death penalty defense attorney. He is the author of three legal thrillers published by Penguin/Putnam and a contributing writer for California Lawyer Magazine. His non-fiction work has appeared in a wide variety of publications, ranging from The Nation and The Progressive to the Los Angeles Times, the L.A. Weekly and Los Angeles Magazine. This story was presented by Common Dreams.)