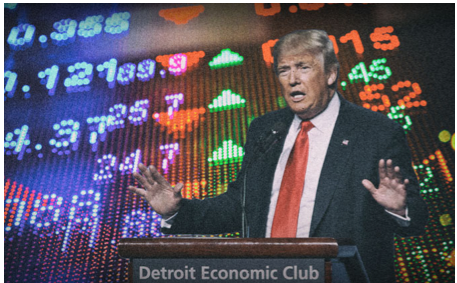 VIEW FROM HERE--According to Donald Trump, the American economy is bigger and better and more beautiful than it has ever been. So why did the stock market take a tumble, losing more than 10 percent of its value in the space of a couple of weeks? It continues to bounce up and down by a few points, not moving decisively in one direction or another. Clearly, traders are not heeding the Donald’s warning about letting the Dow Jones decline.

The last recession—the Great Recession—began in 2007 and ended a few years later. Most of the Obama administration saw a slow and steady economic recovery. Trump has claimed credit for the (until now) booming stock market and full employment. (Most economists consider the current four percent unemployment rate as the lowest possible. They believe that some number of workers will always be between jobs.)

A drop of 10 percent in stock market value is considered to be a “correction” and is not indicative of a recession. Corrections occur when traders feel the market is overheated and it is time to pull on the reins. Now, when so much of trading is governed by algorithms, corrections can be automatic.

In searching for the why of stock market volatility, many commentators point to the possibility that the recent tax cut, combined with additional spending by the federal government, might result in inflation. Although not yet a major factor, pressure to raise wages has the potential to also affect the economy.

Inflation is the great bugbear of economists. The most stark example is what happened in Germany in 1922. The allied victors of World War I imposed crippling reparation payments on the Germans (totaling some one-sixth of the German economy). Unable to make the payments, they asked for a break and were denied by France and Britain.

In more recent times, Israel and Mexico both reset the value of their currencies due to inflation. Currently, inflation in Venezuela is running north of 500 percent on an annual basis.

A few years later, President Jimmy Carter appointed economist Paul Volcker as chairman of the Federal Reserve. Volcker slammed the brakes on the money supply and inflation was beaten thanks to the ensuing recession. This is the roller coaster the stock market doesn’t want to ride.

The Keynesian economics by which most governments operate says cutting taxes and jacking up government spending is what you do during recessions, not when the economy is running near capacity. Dumping $1.5 trillion into the hands of corporations won’t actually result in the resurrection of the manufacturing economy or hiring new employees or paying workers higher wages.

What is happening is that corporations are giving money to shareholders as increased dividends and engaging in stock buybacks. A pittance (maybe two or three percent) has been distributed to employees as bonuses. Kimberly-Clark, the maker of Kleenex, is using its windfall to pay the costs of closing factories and laying off workers.

The tax cut will cause a massive rise in government debt. Combined with the recently adopted budget that provides hundreds of billions in new spending with no offsetting revenue increase, the effect will be a huge amount of additional debt. Already, the GOP is seeking cuts in anti-poverty programs including the Supplemental Nutrition Assistance Program (SNAP) and Medicaid. Social Security is also on the chopping block yet again.

Bankrupting the federal government to benefit the wealthy is in line with Trump’s history of bankrupting businesses to benefit him. Casinos, airlines, so-called universities—he has cashed in on one failure after another.

Trump and the Republicans are betting that economic gravity will be repealed and throwing money at the rich will work this time. So far the Trump record boasts a bigger trade imbalance and a greater federal deficit. Sooner or later, this house of cards falls and we all pay the price.

(Doug Epperhart is a publisher, a long-time neighborhood council activist and has served on the Board of Neighborhood Commissioners. He is a contributor to CityWatch and can be reached at: [email protected]) Edited for CityWatch by Linda Abrams.