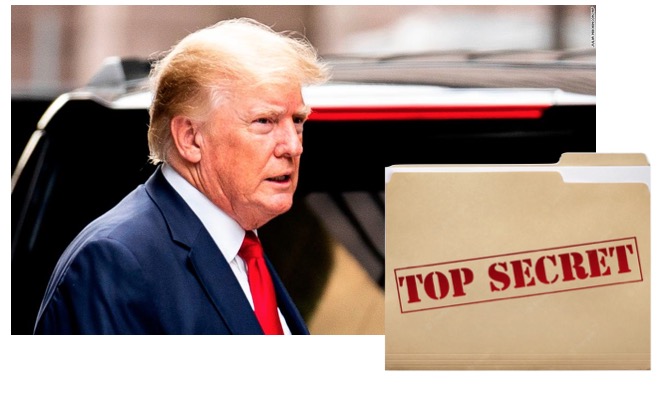 GELFAND’S WORLD - A hint or a clue: We will know that Donald Trump is seriously concerned over the top secret documents he kept in Mar a Lago if Republicans in the congress suddenly start talking about closing down the prison facility at Guantanamo Bay.

Perhaps you will think this is just sarcasm, but can you be sure?

A brief introduction to this piece:

There are some articles that are hard to write because there are logical or factual gaps that are difficult to fill. This is one of them. The working assumption is that Donald Trump intentionally stole the top secret documents that ended up in Mar a Lago, and that he did so with the intent to gain personally by their possession. What follows includes matters of opinion, some established facts, and a certain amount of conjecture that serves to fill in the gaps.

Let's start with an established fact: Donald Trump knowingly took possession of top secret documents which were transported from the White House to Mar a Lago. Any other explanation, such as the idea that the boxes of documents were transported from some other top secret cache is so unlikely as to be close to zero. For one thing, there would have been a record of them having been removed from the other place. So we've got this solid fact -- that the documents were in the White House during the final days of Trump's presidency, and were moved to Mar a Lago.

We also have the strong conclusion that Trump was himself aware of their existence at Mar a Lago and was asked for their return by the current administration. How can we be so sure? The easiest and most obvious answer is that Trump never claimed otherwise, but instead offered a bunch of different explanations. These have one thing in common. They involve the tacit admission by Trump that he was aware of the documents' existence. Consider: He claimed that he had declassified them (this turned out to be irrelevant but probably untrue), and that all the government had to do was ask and they would be returned (they did ask, and he didn't return them) or that the FBI planted evidence (we're not hearing that one lately) or -- and this is my favorite -- "they're mine." That last assertion goes contrary to the Espionage Act, which doesn't care whether documents are officially declassified and doesn't treat them as any man's personal possessions. In each of Trump's excuses, he has admitted that he had possession of the files and knew of their existence.

It's interesting that he didn't try a different excuse, that lots of stuff was moved from the White House in that last week, and he can't be expected to have kept track of everything. (Perhaps that leak by the Department of Justice that every page would be checked for finger prints stifled that defense.) In any case, Trump has been up front about this one thing -- that he had the documents and knew that he had them.

So, Trump took the documents from the White House, knew that he had them in Florida, and knew that they involved national secrets. These facts have been beaten to death by the news media, but it is useful to summarize the parts that are indisputable.

And this is where conjecture and speculation come in. Based on everything we've experienced over the Trump presidency, the following, although a matter of opinion, is justifiable since it fits the current facts:

Trump took the documents with the intent to trade access to them for his own personal gain. If this is the case, the purchasers would most likely be foreign governments or crooks in foreign locations. I will admit freely right here that there is an alternate possibility for what Trump intended to do with the documents which we will discuss later, but in either case, the intent would be to engage in lawbreaking of a high order.

The internet is rife with speculation about who Trump would like to sell his ill-gotten booty to. One suggestion is that he could peddle anything nuclear to the Saudi leadership. They are concerned about Iran building a nuclear bomb, and want to know how to build one of their own. In addition, they would obviously like to know anything we know about the Iranian weapons program.

The reason that Saudi Arabia comes up in these discussions is that they have a lot of money, have strategic interests, and have had close personal ties with the last several Republican presidents.

The more likely buyer is, of course, the Russians. Trump keeps repeating the line that he had nothing to do with the Russians and that suggestions to the contrary were part of a big witch hunt.

There was and is plenty of reason to believe that Trump is in Putin's back pocket. Trump's behavior in his first months in office (the meeting with the Russian ambassador), the Helsinki debacle, and Trump's continuing efforts to undermine NATO are all evidence for this accusation. More recently, just before the outbreak of the Russian invasion of Ukraine, Trump couldn't resist temptation, making a remark crediting Putin for "genius" in his recognition of ostensible breakaway regions in eastern Ukraine.

Trump's remark was pathetic -- It was obvious that Putin was just putting up a wall of nonsense in the attempt to justify an otherwise unjustifiable invasion. In the modern world, we call such claims "gaslighting," but Trump treated this hostile propaganda as something worthy of praise. Of late, Trump is not doing much to support Ukrainian independence, to say the least.

Perhaps Trump intends to continue a lucrative relationship with Putin, or maybe Trump is trying to protect himself by having something with which to pay Putin for the inevitable next bit of blackmail. Either possibility is consistent with Trump's past behavior and with the more recent attempt to steal and hold onto the top secret files.

Now to crunch time. It's entirely possible that U.S. intelligence has already become aware of attempts by foreign powers to trade with Trump, or attempts by Trump to trade with them. If so, we are not going to be told by the CIA or the NSA that they know of such treachery. But we may become aware indirectly. And the raid on Mar a Lago would be the first example.

In this scenario, the raid was a way to tell Trump to shut up and behave himself. Stay away from Vladimir Putin, keep your nose out of Ukraine policy, and don't offer any secret information to the Saudis or to Iran.

How would our government have gotten information about Trump's foreign doings? Remember that he is surrounded with U.S. government agents which include a full time Secret Service detail. It's also likely that there are agents planted within the staff at Mar a Lago and Trump's other holdings. Considering the concerns about a Russian connection, it would be hard to imagine this country's intelligence agencies ignoring the threat. At the least, they would have been collecting as much information as they could.

Remember also that Trump is notoriously sloppy about communications security. We may presume that our government is monitoring Trump's cell phone full time (and we can likewise assume that every foreign government with a moderate intelligence budget will be doing the same).

We have experience to back up our conjectures. Trump is arrogant to the point he thinks he can fool anyone, thinks he can get away with anything (his own experience backs that up) and is self centered to an extent that the rest of us cannot comprehend. He seems to lack patience, as his angry responses to hundreds of people over the years have shown. Is there any reason to believe that Trump has not already tried to shop the secrets he held, that the U.S. government has been following his communications closely, and that he doesn't have a lot of secrets that the CIA or other agencies don't know?

Perhaps Trump placed enough of his own people into intelligence agency administrations to protect him, but experience tends to argue against this. Even in his own White House, there have been dozens of his direct appointees who have testified and written books to the effect that their main job was to protect the country against Trump himself. It's unlikely that our intelligence agencies were compromised to a significant extent, other than to have dull witted incompetents assigned as their nominal chiefs. It's also unlikely that every single member of Trump's Secret Service detail is compromised. At least one of them is likely to be a conduit to the intelligence services.

There is a lot of conjecture here, but the dots connect. We know that Trump is a lot less secure financially than he wants us to believe. We know he has debts that are coming due, and that his businesses took a big hit during his presidency. Knowing what we know about Trump's character, it wouldn't be a big surprise if he tried to market some of what he possessed.

There is one other underlying assumption we are making here. Most normal people, even high ranking politicians, understand the difference between the usual tug and pull of politics, which can include back scratching and palm greasing at the legislative level. Certainly Trump engaged in that sort of thing when he was in the real estate business. But most of us can make the distinction between minor graft and serious treason. We are making the assumption here that Trump does not make that distinction, probably due to his underlying personality issues.

The raid on Mar a Lago was akin to the punchline in the old joke about the farmer who hits his mule with a board before hooking him up to the wagon. "The two-by-four is to get his attention."

The raid on Mar a Lago was like that two-by-four.

Notice that I am using the word "raid" to refer to the FBI search. The news media object to that word, referring to it as a legal search justified by a warrant. That is, of course, true, but Raid is the word Trump used for the action, and if these conjectures are true, it is the sense that the Department of Justice wanted to communicate to Trump. You have been raided, we got the goods, and you better keep your nose clean from now on.

There is a less likely scenario, but one that fits the underlying model. In those first few days of 2021, Trump knew that he was not going to be president for much longer, and that he had done a lot of indictable things over the past years. He also knew of some things his government had done which would be of great embarrassment to the United States. Maybe there is something in that file about the President of France, or in one of those super top secret files. Trump’s knowledge of those secrets combined with his possession of documentary evidence would be a potent defense against prosecution, in the sense that Trump could use the secrets to blackmail his accusers. "It's a nice government you have there. Too bad if something really embarrassing were to come out."

In either of the conjectures being raised here, Trump intended to commit some serious crimes, and they would be of substantial risk to the security and image of the United States of America. The raid on Mar a Lago fits into a model in which the U.S. intelligence agencies were onto Trump from the beginning, and have been forced to do some catching up at every step of the way. By raiding his house and taking back the secret documents, they have served notice on him that they've got something to hold over him.