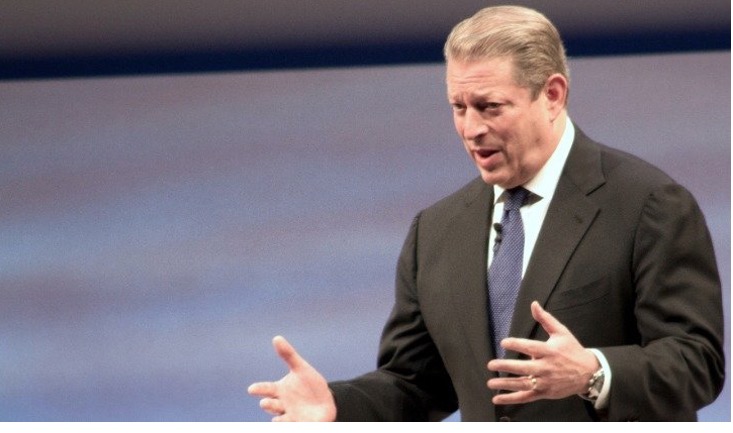 GELFAND’S WORLD - Back in the 1990s, I listened to Rush Limbaugh once in a while. One morning, he had Dixie Lee Ray on his show.

The reality was, and continues to be, that a slight overall warming of the atmosphere and the oceans is enough to do a lot of damage, even as winters continue to exist. And by now there is lots of evidence that winters are getting less cold and shorter, glaciers are melting, big pieces of the ice sheets are breaking off, and we're now in a state of chronic wildfires as draught, heat, and periods of dryness combine. With the present conditions, all it takes is a spark.

By now, it's clear that humans are causing global warming through our burning of fossil fuels, pouring of concrete, and various other activities.

In the years that followed Limbaugh's statements, conservatives continued to downplay global warming as a reality. When the reality of warming became an unescapable fact, they changed their denial. At this point, they argued that it might exist, but not as something that humans had anything to do with. When that argument became untenable, they switched gears again, arguing that there was no point in spending trillions of dollars over something that we couldn't help anyway. The one commonality in their arguments was that businesses could not be held responsible or made to take corrective actions.

Donald Trump was a part of the problem. When asked by a reporter about climate change, he replied that the science wasn't there. It was, and we lost another 4 years during the Trump years.

So here we are, in a year when average global temperatures have been rising steadily, year after year, when mega-storms are becoming more prevalent from season to season, and a multiyear draught combined with higher average temperatures has resulted in wildfires by the hundreds and then thousands.

It's getting dangerously close to home. This week, a new fire near Yosemite has already burned thousands of acres. But this time, global warming is being named as a contributing factor:

Cal Fire Battalion Chief Jon Heggie was quoted in a CNN article "What I can tell you is this is a direct result of what is climate change," he said. "You can't have a 10-year drought in California and expect things to be the same. And we are now paying the price for that 10-year drought and that climate change."

As Meet the Press mentioned this Sunday, the predictions Al Gore had made in his "An Inconvenient Truth" are coming true right now -- the draughts, fires, intense storms, and so on, all happening.

The evidence is becoming overwhelming, but where are the people in the southeast United States and Oklahoma and Texas who have and will continue to suffer the worst as the problem continues to accumulate? A while back, I wrote a piece in this publication pointing out that the Gulf Coast will be mauled by monster storms at an increasing rate, so that some (as yet undetermined) number of years from now, property values will submarine because no foot of coastal property will seem safe. If and when summer temperatures routinely top 110 and then 120 degrees, the effect will be similar, only more pronounced. You can hope that the next big hurricane won't wander over your patch of coastline, but yearly and then monthly heatwaves will affect large areas of the country.

We've wasted 30 years in getting started on global warming due to the lies and deceit of the right-wing propaganda apparatus. It's 30 years that we can't get back. But we could begin to nibble away at the problem we ourselves are creating, if only the deniers would join the correct side in the ongoing debate.

Everybody is angry at Sen. Manchin this week for sabotaging the Democratic Party's efforts, but we should recognize that we wouldn't need Manchin if the Republicans had half an honest bone in their collective bodies.

A legitimate position for Democrats to take on gas prices

It's true that the internal combustion engine contributes a substantial share to greenhouse gas emissions. At the same time, most of us are in need of our cars for the immediate future. The proper approach, both politically and environmentally, is to recognize that we have to wean our way off the gasoline engine, but we can't do it all at once. Likewise, the country and its government should do their best to keep gasoline prices stable, or at least predictable, as we develop and implement a rational process for getting to a greenhouse-gas-free transportation system. It's a policy that Joe Biden would be wise to proclaim.

Dealing with the concerns of big business and fiscal conservatives

People and corporations with substantial holdings in the fossil fuel industries and in industries that use fossil fuels have been propagandizing against the reality of global warming for decades. It's actually a little strange and almost paradoxical, because the existence of the propaganda machine is, in and of itself, a kind of confession. They fear to admit to the existence of global warming because they fear the consequences if society as a whole were to accept that reality. Presumably, they expect that if society were to get serious about global warming, the result would be legal and financial attacks on their industries. Coal fired power plants would be shut down or at least used less and less, and the result would be the practical end of the coal industry. Taxes would be put on oil and coal ("the carbon tax") and the oil companies would be reduced in size and eventually die off.

These are logical conclusions, but not necessarily the inevitable ones. There may be alternatives.

But if the fossil fuel industries continue to lie, they aren't going to retain much good will when we inevitably reach those disastrous years in which the Gulf Coast, the south Atlantic shoreline, and much of the southeast are devastated by the effects of hotter temperatures. If they insist on remaining the enemies of truth and public safety, the public will be OK with letting them die off sometime in the future.

But it doesn't necessarily have to be that way. Maybe the oil companies and the regions which live on coal mining could transition into different ways of making money. Petroleum is astonishingly good as a source for all sorts of things, from the production of plastics and lubricants to source materials for pharmaceuticals. Some burning of fossil fuels can be offset by various methods of carbon sequestration.

But the main requirement right now is that the nay-sayers stop lying and admit to the reality of global warming, the reality that global warming is caused by humans burning fossil fuels. If society as a whole were to agree to this simple truth, we might then find our way into financially productive alternatives which create well paying jobs and keep corporate income flowing.

But if the red states and their elected officials keep pretending the lie about there being no global warming, we will continue on the present pathway of ever-worsening climate changes. And they can all continue to burn in their own man-made Hell, this one being the one they will continue to live in on the surface of this earth.

Benedicts Arnold and the House Committee on January 6

OK, so it's a little joke based on the construction of plural nouns that we were taught back in the tenth grade. Your state has one Attorney General, but when you are talking about any two of them, they are formally referred to as the Attorneys General. So what do we call all those people who rioted at the Capitol and the politicians who defended them?

Rudi Giuliani is a Benedict Arnold, as is Josh Hawley, as is Donald Trump himself. Many of the people who invaded the Capitol building on January 6 are of the same traitorous disposition.

It was an interesting week. The House Committee on the January 6 attack continues to be an exercise in storytelling accompanied by occasional witness testimony. Last week's testimony was not as dramatic as that of Cassidy Hutchinson, but (I would like to try to convince you) it was almost equally important. Here's why.

Think of the old line about the mills of the gods. The mills of the gods grind slowly, but they grind exceedingly fine. In other words, the hearings are taking a while, but they are overcoming all the denial, one point at a time. Consider the following points which these hearing have now made:

Donald Trump was aware of the angry and potentially violent nature of the proposed January 6 demonstration. He knew that some of them had guns.

Trump did his best to stir up the mob and wanted to join them at the Capitol.

Trump was in front of a television set tuned to Fox News over the entire afternoon, watching the violence develop. He can't pretend to have been unaware, or to have been working on some other pressing matter.

Trump was asked repeatedly by his White House staffers and by his political allies in the media to call a halt to the mob violence and to tell everyone to leave the Capitol.

He did not do so. (I think it is fair to agree with Rep. Kinzinger that "Trump did not fail to act. He chose not to act.")

During the mob violence, Trump sent out a tweet denouncing his own Vice President, which further infuriated the mob. The mob tried to get hold of Pence, and the Pence Secret Service detail were frightened for their own lives.

Only after 187 minutes did Trump release his public statement, which was a mixed message at best, and an attempt to exonerate the mob for sure.

Even now, Trump still attempts to subvert the results of the 2020 presidential election.

Josh Hawley got played by the committee. They started by showing his infamous raised fist in support of the Trump supporters on the morning of January 6, Then they ran a clip showing Hawley running across the intersection of two corridors as he fled. Then they ran the same clip again. It was inevitable that the anti-Hawley faction (there are a lot of them) would play it up. Run Josh, Run. You can fill in your own joke.

Yes, it's a cheap shot, but it followed the well-worn path that the right wing uses 52 weeks a year -- find one little thing you can misconstrue, and repeat it endlessly.

Big time losers: Mike Pence has to be the big loser. He wasn't fried the way Hawley or Trump were, but he continues to be portrayed as somebody that no Trump supporter would vote for -- remember, they wanted to hang him at one point -- and the committee hearing made sure to show the video of Trump supporters declaring that Pence was a traitor.

Pence came across implicitly as being on the right side of history in following his duty to certify Biden's election, but that stand will lose him a lot of votes in any future presidential primary.

Let's keep one thing in mind: Only somebody as deranged as Trump and his small group of insurrectionist advisors would consider Pence to be a traitor. But that's how Pence was portrayed by Trump and then almost immediately by the mob leaders on January 6, 2021.

There was one other big time loser of the week: Steve Bannon.

He found himself out on the end of a limb and there was nowhere to go. Bannon keeps blustering and threatening, but unless some combination of judges delivers up a miracle for him, he's going to go to jail before the next president takes office. By continuing to spew contempt for the justice system, he's not doing himself any favors when it comes to sentencing.