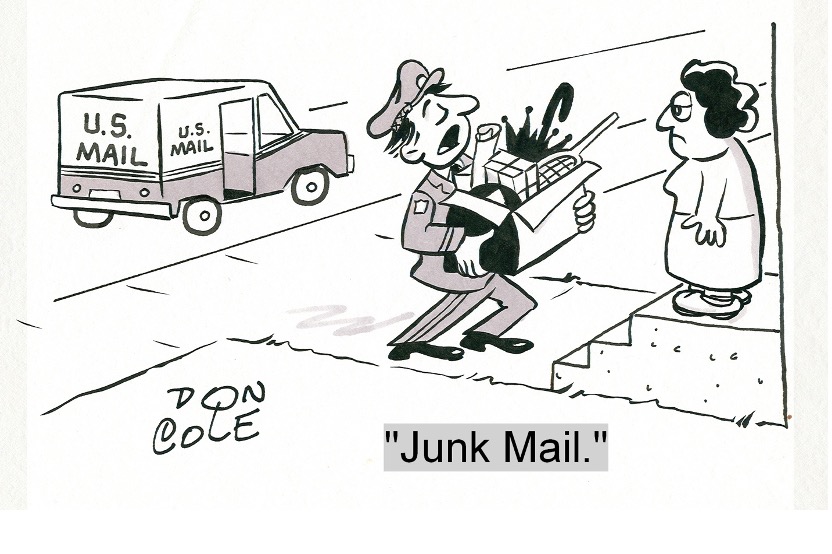 GELAND’S WORLD - Is there a point at which a political candidate can do so much advertising that it becomes overkill?

One San Pedro resident told me she would refuse to vote for a leading candidate because she has received so many fliers favoring his campaign. The implication is that he is trying to buy the election.

More about that in later weeks,  but first a one paragraph review of what you should and should not take from all those slick candidate fliers you are undoubtedly getting in your mail right now.

The first point: Those fliers you just received from candidates Smith and Jones serve to familiarize you with the candidates' existence.  The pundits refer to this as name recognition. The printed fliers also tend to make the candidates look legitimate. That's the positive side of your receiving those fliers. Now here's the negative side:

Those fliers had to be paid for by somebody. And anybody who makes a political donation is, by definition, somebody with an interest. Cynics and campaign managers on the political right refer to labor unions and school teachers and environmental groups as special interests. Cynics and campaign managers on the left refer to corporations and the owners of corporations and antiabortion groups as special interests.

The absolutely worst, most untrustworthy campaign literature it is possible to get

It's an open secret among political professionals -- These slate mailers are purely a business designed to sell their endorsements to candidates who are hungry to buy name recognition. The clue is in the small print that you can find somewhere on the card: "Appearance is paid for and authorized by each candidate and ballot measure which is designated by an *"

Yes -- designated by an asterisk.

The Cops voter guide featured endorsements for 10 offices. Of those 10, fully 8 were paid for, as signified by the asterisk. Only 2 were unpaid.

In the Senior Advocate slate mailer I received, there were 23 offices with endorsements, and all 23 were paid for, as signified by the asterisk.

In other words, if you get a mailer that announces that it is the Cops voter guide, or the Seniors' advocacy card, or the Democrats' or Jews' or Independents' voter guide, you should understand that what the candidates think and who they are has nothing to do with their endorsements by that mailer. It's just an endorsement that was bought and paid for.

The mayoral race is heating up

I've received more than half a dozen fliers for Rick Caruso and three fliers for Karen Bass. They are all fairly conventional, in the sense that Bass talks about what she has accomplished in life and in office, and Caruso promises the moon and the stars to the residents of Los Angeles. Got a problem with crime? Rick says he will solve our problems. Homelessness bother you? He's got a plan to build 30,000 units in one year. Corruption in Los Angeles government? Rick will clean it up.

It's hard to reply to Caruso's promises because there are so many of them. Each one would require an entire essay to take down. For example, those 30,000 units for the homeless: The claim is absurd, but it takes a while to do the math and point out that even if you could buy or build one unit for a thousand dollars, it would cost 30 million dollars to build those units. And if you were to apply a more reasonable number -- say somewhere between ten thousand and a hundred thousand dollars, then we are talking somewhere between three hundred million dollars and three billion dollars.

Real math tells us that one thousand times one thousand is a million. Caruso math seems to be somewhere else. But we aren't sure where those 30,000 housing units are coming from. Even if they are that new fad known as tiny homes, it's hard to imagine generating them for less than a thousand dollars each, and finding land to site them on is another issue.

And then you look at the other Caruso promises, and each one is another effort to consider and, usually, to refute. Rick looks at the camera and tells us he reduced crime by thirty percent. This is another claim that isn't quite a big lie, but is a lot less than the whole truth. And I doubt that Caruso even knows about the lead-crime hypothesis, which has been discussed here and other places.

In skeptical parlance, what Caruso is doing is known as a Gish Gallup. I suspect the term will come up as the campaign goes on.

The one area Caruso might make a difference is in cutting back on the developer-influenced control over the City Council. He is an outsider. My problem is that he is also a developer. One of the biggest. Does anybody expect him to suddenly stop supporting the interests of developers when he finally adds political power to his economic power?

We could go on, but I suspect that the real battle will commence after the primary is over and Caruso is in a runoff with Karen Bass. Right now his television ads claim that he is a Democrat who defends the right to an abortion. Those same ads attack Karen Bass for calling those claims into question. It's as if Caruso's political history can be made to go away.

When the election race becomes focused on Caruso vs. Bass, we'll see and hear a lot more about who Caruso really is. I don't think his Saint Rick persona will survive such scrutiny.

As to Karen Bass -- I saw her at a political gathering last weekend. She comes across as soft spoken and seemingly determined to stick to the truth. If so, that differentiates her from Caruso. I think that voters should take a closer look at her life's record as a physician's assistant and ER worker. This suggests both intelligence and a tendency towards hard work. Her political career shows that she has knowledge and working experience in government -- something that is badly lacking in outsiders who make being an outsider their claim to fame.

I think that the Bass campaign is yet to catch fire in terms of distinguishing her from the other guy, in the sense of what kind of mayor she would be.

Interestingly, there is something in the Bass experience that -- in my view -- makes her the desirable candidate, even as the Caruso campaign attacks her for it.

Back when Arnold Schwarzenegger was governor, Bass had to negotiate the state budget with him under conditions of gross financial stress. She managed to eke out some social benefit spending while reaching agreement on a balanced state budget. This suggests to me that she may be the one to put some reasonable limits on salary increases for city workers. That's what the city needs, if we are to do all those things we talk about but never get around to.

Caruso's ads attack her for this very quality. They point out that she agreed to cuts in addiction spending, and so forth. Bass points out in her mailers that she was given the Profiles in Courage award for this.

Meanwhile, the stack of political mailers is piling up on my desk. City Council candidate Tim McOsker is leading the pack with 17 of them. Caruso is next in line, but the Caruso campaign (which appears to be Rick Caruso) paid for them. As I said above, remember that every one of those fliers is paid for by somebody.

In one case, it is the billionaire developer trying to buy the office. In the other case it is lots of municipal employee unions and Democratic Party interests looking to elect a qualified person who also has been a long-term Democratic Party functionary.

We'll consider McOsker and his opponent if there is a runoff after the June primary. That would be an interesting race.