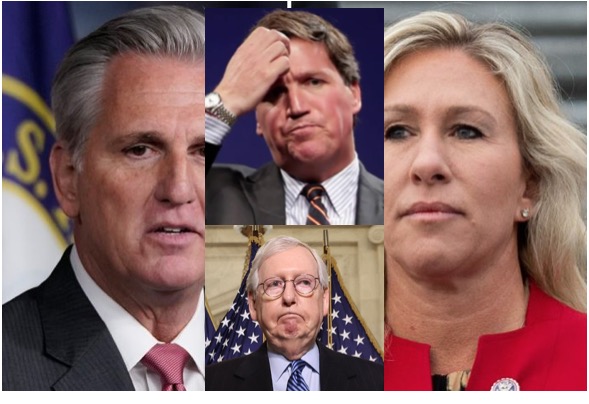 GELFAND’S WORLD - It is a truism that the way to deal with a bully is to fight back.

For years, I've been asking why the Democrats in the congress have allowed themselves to be bullied by Mitch McConnell. Back when Barack Obama was in his first year as president, McConnell made clear that he would do his best to make Obama a one-term president, and he would do this by denying Obama any and every legislative victory.

That was bullying. And the Democrats gave in to it. They kept hoping and pretending that it would be possible to "work across the aisle," as the cliche has it, and that they might find some Republican who would vote for the Affordable Care Act. McConnell kept his caucus in order, managing to deny even one symbolic vote from even one senator.

Richard Nixon or Lyndon Johnson wouldn't have put up with this. They would have put out the word that your state isn't going to get much in the way of highway funding or new jobs at the army base if you keep it up. And it worked. LBJ had a reputation which put fear in the hearts of anybody who thought about messing with him.  In practice, senators and congressmen on both sides of the aisle got their federal money, because both sides understood how business was done.

As a nation, we've now endured more than a decade of bullying by the Republicans, and we've suffered from it even when they didn't have a controlling majority. They've used every tool they had (the filibuster as a routine practice) and when they didn't have a traditional tool, they made one up (the denial of a Supreme Court appointment during Obama's last year).

Hindsight teaches us that we should have done something about the Republican bullying when it ramped up in Obama's first term. The way to have done so would have been to point out quietly, in some backroom conversation, that continued funding for the shipyards in Mississippi and the army bases in other states were dependent on a mutually cooperative political system. You can get yours, but only if we get ours. And what we wanted was a system of universal access to health care. What they wanted was federal dollars going to their states.

And then it became more than bullying. It became war.

The American South and its allied red states have managed to carry on a cultural and economic war against the rest of the United States for the last several decades. Unfortunately for the rest of us, the word retaliation doesn't seem to be in the Democrats' vocabulary. It's time they learned it.

Consider what we would have accomplished if the Democrats had figured out to use the power they had, rather than relying on wishful thinking about getting Susan Collins' vote.

One avoidable outcome was that McConnell was able to steal the Supreme Court. It started when he refused to bring a vote on nominee Merrick Garland to the floor of the Senate. Democrats should have made clear that not one more dollar was going to Kentucky until the vote on Garland was taken. The right wing media would have screamed to high heaven, but the net effect would likely have been that we wouldn't be having the conversation about the end of Roe v Wade this week.

So here we are, more than a decade into Republican bullying, and the nation is facing the end of reproductive freedom in about half the states. Some states are already talking about a return to making contraception illegal, as you can read here.

And we are in this situation because the Democrats in congress didn't use their power effectively.

It's called passive aggression. Democrats don't have to win new legislative victories on their own. They simply deny the Republicans the appropriation for the new ship contract or that next order of fighter planes. They don't even have to talk about it. Just write a number that is ten or twenty percent lower in the next budget, and watch as the constituents of those Republican congressmen come begging that their jobs be saved.

It may be an unpleasant way to do politics, but when the other side is using that same technique on the debt ceiling and Supreme Court nominees, what choice is there?

It's time to change.

The right wing Republicans (which seems to be nearly all of them) just won a big victory in the proposed decision to overturn Roe v Wade. They did it as a minority party helmed by minority-vote presidents, and they did it by using every nasty trick in the book.

It's time to retaliate.

It's time to communicate that the liberal side will use the tools and powers it does possess to make sure that it gets what it is entitled to, and if the only way to do so at this moment is to inflict political pain on the opposition, then that is the decision.

Unity is a strategic necessity

Republicans have been successful at moving the country to the right because they have learned to march in lockstep towards an overall goal of rescinding liberal advances. They may be having arguments in the back room about the particulars of their ultimate goal, but they don't let the fighting become public. Compare this party discipline to that of the Democrats. Would Hillary Clinton be better for the country than Trump? Undoubtedly, but there were some supporters of Bernie Sanders who refused to vote for Hillary because she didn't rise to their vision of the perfect candidate. In so doing, they were, in effect, voting for long term reactionary stasis, the end to reproductive freedom, and big tax cuts for billionaires. There wasn't room for the idea of gradual progression towards a generally virtuous goal in their tiny minds.

We need unity, or something pretty close to it, if we want to improve on the current dismal situation.

Putin gave his May 9 Victory Day speech in Moscow. Pundits had been speculating for weeks about how the timing of the Ukraine invasion would be affected by Victory Day. In recent days, they have been fretting that Putin might use the occasion to escalate the conflict, perhaps by declaring it to be war.

None of this seems to have been the case. Observers point out that displays by the Russian Airforce were not in evidence. They do point out that it was an excuse for Putin to repeat the lie that he was forced to intervene in Ukraine to protect Russia.

Meanwhile the war drags on, which is a horrible thing for the inhabitants of Ukraine and probably a best case scenario from the standpoint of western nations who didn't want to see a quick Russian victory. The whole thing is simultaneously depressing in the extreme, yet also heartening in the sense that there is hope for Ukrainian survival as an independent country.

There is a new television campaign ad which begins with a ground-level closeup of a dachshund. Yeah, that kind of dog. Eventually the camera tilts up to show a rather stick-like figure, a slender man who is walking that dog. The first thing you notice is that his posture is a little awkward. You wonder if this is a professional who is trying to follow in the footsteps of Jerry Lewis or perhaps one of the French comedians.

It's not a really compelling way to start a political message, to my mind.

But suddenly it is revealed that this is an ad for mayoral candidate Mike Feuer, and he is trying to push the storyline that he is the underdog. Get it? The underdog. What kind of dog could be more under than a dachshund? I'm still wondering whether this is really Mike Feuer's dog, or whether it was just rented for this ad. I would guess that it really is Mike Feuer's dog, because any campaign consultant in his right mind would have chosen a different breed if given the choice.

We do get one bit of tangible information: Feuer claims that he is being outspent thirty to one. He's the underdog, if the voters who like to support the underdog will identify him as their underdog. My thought: If you only have that little bit of money to work with, then try to spend it on an approach that appeals to voters. This ad takes way too long to explain what it is about -- Mike Feuer -- rather than a comedy sketch about a tall man and a short dog.