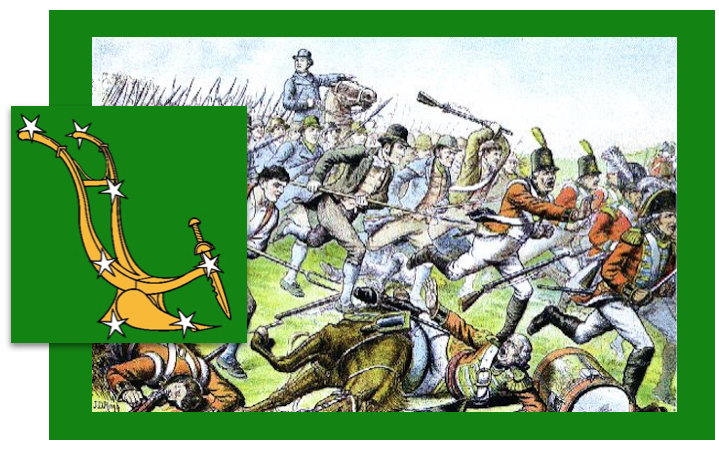 GELFAND’S WORLD - In 1798, an attempt at rebellion in Ireland resulted in the British capturing and executing rebels.

Apparently, it was a fashion among the rebels to wear their hair cut short, or "cropped," hence their being referred to as croppies. Anne Byrne sings a song called The Croppy Boy, telling the story of one such rebel.

In 1967, the island that is Ireland remained partitioned into the independent republic and the northern counties which remained under British control. This being less than fifty years since the independence of the southern counties, there were many Irish who continued to hope for the eventual reunification of the entire island. Tommy Makem wrote what has come down as his most famous ballad about that yearning, "Four Green Fields." In this song, a "fine old woman" represents Ireland, and the four green fields refer to the four provinces that make up the entire island. One of those four green fields is of course the northern part that remains in the United Kingdom.

A broader meaning of St Patrick's Day and the Ukraine connection

In this country, we have a short term and rather stereotyped view of Irish history. In brief, we think of the Irish who fled the famine of the mid-1800s to come to the United States, and we are aware of the rebellions against British rule. Those who are at all aware tend to think of the rebellion that started in 1916 and eventually resulted in an independent Irish republic in the south, and the northern counties continuing under British rule.

This is a bit limited because even the modern history of Ireland goes back more than 2000 years, continues with Christianization in the early part of the first millennium, and continued on with slow attempts by the English to conquer it beginning early in the second millennium and continuing through 1600.

In brief, there was an Ireland and an Irish culture long before there was English rule. Equally to the point, there were attempts to regain independence from the British for at least three centuries.

Just Say No to the Off Ramp for Putin

A whole generation of suspense novelists have played with the danger of a terrorist organization getting hold of nuclear weapons and then either vaporizing Prague or holding the world to ransom. We shouldn't treat it any differently if the terrorist organization is the leadership of the Russian Federation. We have been held to ransom, in this case being told to butt out of a war of aggression against a large and friendly European country.

It's a whole new level of escalation that we have to resist in all possible ways.

And this is why we should not be eager to give Putin a way out of the trouble he has caused for himself. Tom McTague, writing in the Atlantic, referred to this approach as finding Putin an off ramp. May I respectfully suggest that this is precisely wrong.

The idea for the off-ramp is that given some acceptable (to us) level of concessions, Putin could declare victory and pull out, allowing the surviving Ukrainians to be spared.

What's wrong with peace, you might say. Sometimes you have to put up with what would have been unthinkable last month, because the alternative is that more lives will be lost, more children dying under Russian cannon fire, more young men blown up.

But the problem with this argument is tragically simple. Putin has used the threat of nuclear warfare to get his way in a conventional conflict. Worse yet, he is the attacker in what is simply an attempt at empire building. It's weirdly similar to something from prior to the First World War.

In so doing, Putin has single-handedly changed the rules that the modern world has lived by. It's true that the mere threat of using nuclear weapons (even battlefield nuclear weapons) is not the same as their actual use, but it changes the equation that all other nations have had to live by these past sixty years.

Giving the Russian invaders a face-saving out would mean that we have to give them something in exchange for their current efforts, presumably a declaration of future Ukrainian neutrality and the ceding of the eastern regions to Russian control. Maybe Putin would also demand a guarantee that Russia owns Crimea along with the other demands.

There is a word for this kind of concession that goes back to Munich. It's called appeasement, and once again it is intolerable. It would be rewarding the Russians for their aggression. It's exactly and precisely the wrong signal.

Here is a different policy: The current economic sanctions will be continued, with a year added for each additional week that the attacks by Russia continue. The reason for this is to make unlikely the danger that this kind of behavior will ever happen again.

There is one additional point that needs to be addressed. A colleague of mine, in all seriousness, pointed out that the war could likely have been averted if only Ukraine and the west had guaranteed continuing neutrality by Ukraine -- no NATO membership etc.

To borrow Nancy Reagan's famous phrase, we should just say No.

And that brings up one last point. Apologists for Putin like to point out that Russia has been attacked from all directions and by multiple countries for centuries, and that this is the motivation for Russia wanting to have a buffer of neutral countries or puppet regimes between itself and western Europe. But this is a specious argument because Russia has nuclear arms. No country would dare attack it. NATO is not designed to attack it. It is about as bullet proof as we are in terms of an attack by armed forces upon its sovereign territory. There is no reason that Putin should have had any fear of an attack coming from Ukraine or Poland or Germany. Russia could blow them up. But somehow there is this obsession with NATO's very existence. It's as if Putin exists in two separate eras, all at the same time. It's 2022 when it's nuclear arms, and it's 1939 when it's the risk of a foreign invasion.

And one last story. Back in 1969, I lived in Cambridge, Massachusetts. I happened to attend the opening day of a new Irish bar called the Plough and Stars. The name (although I was entirely ignorant of this at the time) refers to the flag of one of the rebel armies and also to the name of a play from the years after the 1916 rebellion.

When I came back for a college reunion in 2019, the Plough and Stars was still there.

So although I can't be there to hoist a pint this night, here's to their continued success.

And one last aside, which is really the whole point of this little essay. People don't like living under foreign rulers and having to obey foreign armies on their home soil. It was Ireland and now it is Ukraine.