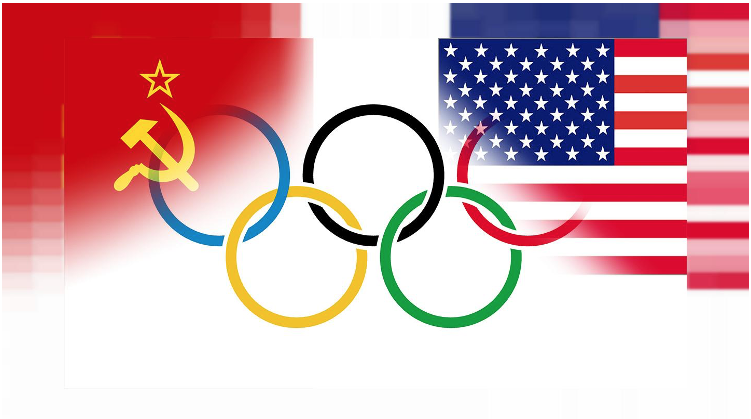 GELFAND’S WORLD - There was an era when the United States and the USSR were bitter rivals in the Olympic games.

Partisans on both sides argued about whether the number of gold medals or the total number of medals -- from gold down through bronze -- was what counted. It depended of course on which side your own country happened to be, but there was a lot of rooting by television audiences.

This may read a little like a Seth Meyers "Back in My Day" skit, but yes, there was a time when viewers took sides in that highly partisan way, and Americans were at least a little concerned that capitalism would not be  shown up by international communism, no matter how illogical this seems in retrospect.

One issue was the way that the Soviets messed around with preparing their athletes. Back in my day, the celebrated female track competitors Tamara and Irina Press (the Press sisters) were referred to sarcastically by other Olympic competitors as "the Press brothers." As I recall, one was a shot putter and the other a sprinter, and they both had a lot of muscle. When the sport of track and field -- including the Olympics -- instituted a form of gender verification, they both suddenly retired.

And of course, there has been controversy and continuing suspicion about the use of performance enhancing drugs by any and all competitors of whatever political persuasion.

So once again we have a doping controversy, although it is about a 15 year old ice skater who seems to be all girl. Why she showed up with three heart drugs in her system is what the controversy has been about. Hint: one of them can give you extra endurance and therefore allow you to train harder. If so, we are talking about the same story as Lance Armstrong and other bicycle racers. You can train harder and longer and manage to recover more quickly by taking drugs or a pint of blood, so that when the bike race (or, in this case, the skating finals) finally happened, you would have that little edge.

In this post Cold War era, it finally became possible for the rest of the world to enforce anti-doping rules, and the former Soviet Union -- now Russia -- has been recognized as a chronic cheater. Its athletes now compete under the title the Russian Olympic Committee, and they're still suspect.

Now here's something I've noticed about my attention to the games this week: I enjoy celebrating when my fellow Americans win something, but at the same time, I don't care anymore whether they bury their Russian opponents. It's just not that much of an issue, now that we don't have to defend Germany and France from a Russian invasion.

There's one more issue. Is it just me as a native-born Californian, or are there others of you out there who find the whole winter Olympics thing so gawdawful dull that you are hard put to turn on the TV set? I mean it is dozens of people -- all wearing the same leotard shaped thing and all sliding down some white surface. Sometimes they do it inside of a sled, and sometimes they slide down something called the halfpipe, but it is still a slide.

And it's all against a white background. The pictures remind me of what it was like if you set the film speed wrong in the light meter, back when we used film in a camera.

Here's what they call disclosure. I spent about 11 years of my life in places that had what they refer to out there as "seasons." You know, the leaves fall from the trees and we spend 3 months of our lives each year without seeing a blade of grass or a green leaf. it's all covered with frozen water.

Some people claim that they like the seasons. Me, I've seen enough snow. And the last time I had on a pair of ice skates, I came this close to a broken rib.

So you can see why I have less than stellar feelings about watching events that happen to be people sliding around on snow and ice. I will concede that riding downhill on a pair of skis must be one of the hardest things to do well. Sliding down that halfpipe thing on a snowboard or a pair of skis looks equally difficult. So why am I starting to find them so dull? I think it's just that they are only that -- sliding down a white surface -- no matter how hard it may truly be. Except for the dramatic falls, every run seems to be the same.

I remember how one music critic referred to some tenor's singing as "making opera look as hard as it really is." Maybe our half-pipers are making it all look too easy. I seriously doubt that Olympic level snowboarding is easier than Nascar, but one has the option of sudden death or maiming, while the other is just sliding down a hill.

And one other thing. The network keeps showing us aerial diagrams of the halfpipe. Does it also look to you like a diagram out of a urology textbook?

Let's take a moment to agree that competitive skating is the real thing. Even if you are a 15 year old Russian girl who used a performance enhancing substance, it's still the real thing. It's got art and beauty that come with huge difficulties. It's a field that numerous Americans have excelled in over the decades, even as their Russian counterparts also won gold medals. It's sort of the womens' gymnastics or the ballet of the winter games. And it is often quite lovely, particularly now that announcers have figured out that they can let us watch instead of repetitively naming every jump. It's curious that after all these years, television finally explained what an Axel is, and why it's different from a toe loop, and then mostly left us alone to watch. The viewer experience improved markedly.

We still get a little cliche mongering, but less

And one final observation: These winter Olympics were first presented to Americans as a societal clash between the Chinese and western societies. The U.S. did not repeat the boycotts of the 1980s, but we made our distaste known through a diplomatic slight, leaving the visiting dignitary role to Vlad Putin. This seems to have been a win-win situation in which American pride was preserved while the games were allowed to proceed.

American television went through a phase where it felt that it had to present every personal hardship or tragedy that any American athlete had suffered, no matter how early in life or irrelevant to performance. Biography and personality became a necessary element. Eventually our Olympic coverage became nothing but a series of concocted story lines about overcoming personal tragedy. They were willing to say a little about some foreign athlete provided it was bizarre enough: something like a bobsledder from a Caribbean island. There seems to be a little less of this, although we are getting a lot of stories about some aging athlete's one last chance to medal on the Olympic stage. It seems like a way to take an otherwise happy story -- you made it to the Olympics -- and turn it into a personal tragedy.