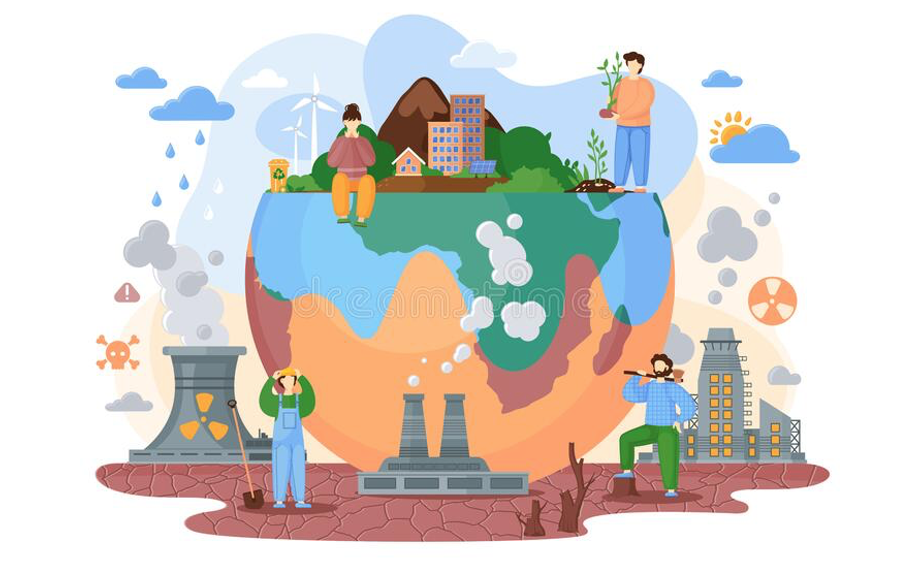 GELFAND’S WORLD - When it comes to the argument over global warming, a recent book called The Story of More, written by a scientist by the name of Hope Jahren, is worthy of discussion.

You can find the link to the book here. Jahren grew up in small-town Minnesota, went to the university, and became a scientist. As she describes, she was given an assignment to teach a class in climate change, and out of several years of doing so, she developed a mass of information that is put together so excellently here.

Let me take a short, two-paragraph excerpt to illustrate the way this book presents its subject matter:

"Still, two centuries of burning fossil fuel, and emitting carbon dioxide into the atmosphere, where it absorbs more of the sun's energy, should have raised the overall temperature, right? Yes, it should have, and yes, it did. The average global surface temperature has increased more than 1.5 degrees Fahrenheit during the last one hundred years (that's a little short of 1 degree warming Celsius).

"I cannot overemphasize how clear this data is. The instrument used to measure temperature rise -- the thermometer - is foolproof: it was invented three hundred years ago and perfected soon after. Weather stations that record the temperature are everywhere, even in the most remote localities of the world, and the data has been faithfully retrieved and recorded in detail for centuries by devoted farmers, postmasters, nuns, citizens, and scientists. The most recent warming trend of just over one degree Fahrenheit during the last thirty years is not something that scientists fight about -- and trust me: scientists will fight about almost anything."

I really loved that bit about "farmers, postmasters, nuns, citizens, and scientists" and the fact that Jahren is willing to use degrees Fahrenheit in the explanation.

In passing, I should mention the book by Bill Gates I discussed in a previous column. Gates begins with the point that we are putting out too much carbon dioxide and we have to stop doing so. He refers to the process as getting to net zero carbon dioxide emission. His approach is to consider the major sectors such as transportation, building, agriculture, and so forth, and work to decrease CO2 emissions in all of them.

Jahren takes a rather different approach that seems to be aimed at students and those who come to the question from a less technical standpoint. As a geobiologist specializing mainly in plant life, she comes to the subject with a knowledge base adequate to explain the complexities, but using a writing style that might be likened more to a beloved grandparent telling a bedtime story. She waits her time and only introduces the global warming angle near the end of the book, so that the argument will be iron-clad.

When it comes to human life on planet earth, everything has gotten bigger. There are more people, we grow more food, raise and kill more animals for meat, we grow fish in offshore fish-farms far in excess of the fish (we are talking about Atlantic Salmon here) that are caught in the wild, and we use vastly more chemical additives in growing plants. It's The Story of More.

Add it all up and it leads to global warming due to the increasing level of carbon dioxide in the atmosphere. I caught one remark by Jahren that echoed one of my own thoughts: Paraphrasing a bit, we ought to be freaked out by the fact that carbon dioxide levels are increasing in our air. And not just a little. If and when the CO2 level in the atmosphere gets to around 560 parts per million, the level will have doubled since the time that my grade school science textbook was published. How can you not be frightened by that?

There is one other aspect to Jahren's book that differs strongly from the Bill Gates approach. Jahren argues that the billions of people who live in poverty in Africa and India are not the problem when it comes to global warming, as they are not the ones who are enjoying the vast amount of CO2-producing energy the way that we in the industrial world are.

Her proposed remedy is that we from the industrial world share more and use less. She points out that were we to divvy up the energy and food equally among all of mankind, we would all have the equivalent to what the average Swiss had in the mid-60s. She points out that this would be a pretty good life for all of us, although Americans would have to fly about 80% fewer miles, drive a lot less, and use public transportation more.

I'm not at all convinced that this approach would be politically feasible. I suspect that we would conclude from modern history that we are a lot more likely to go to war over decreasing amounts of fossil fuels than we would be likely to give them away. But perhaps as the violent storms and other predictable outcomes of global warming affect large portions of the world directly, there might be movement in this political direction.

Still, waiting for the wide-scale destruction of large parts of the Gulf Coast from category 5 hurricanes and wide spread drought and prairie fires in the Midwest is a lousy way to find out where our political future leads.

I will finish this brief attempt at a book report by mentioning the final chapter which is titled An Environmental Catechism. It is a list of changes since Jahren was a school girl back in 1969. I won't present the entirety, but simply cite a few of them.

production of cereal grains has tripled

production of meat has tripled

the amount of fish taken from the ocean has doubled

coal and oil use has doubled; natural gas use has tripled

What is particularly worthwhile about this book is that Jahren writes from the standpoint of a working scientist who feels bound by actual facts. It is for this reason that she is skeptical about the suggestion that we can get by on wind, solar, and water power. As she points out, the energy we get from these sources is growing, but it does not constitute enough of the total to be promising as a serious substitute. That does not mean that we won't build wind farms and solar energy collectors, just that burning fossil fuels -- oil, coal, natural gas -- provides the vast bulk of our energy use. It is for this reason that she points at energy conservation as the best available approach to dealing with global warming.

This is going to be an ongoing debate for the next decade, but even the experts point out that we need to be lucky enough to find some new technological solutions if we are to solve global warming without giving up much of our energy usage.

Writers Bloc will be presenting a free online discussion of the future of abortion in a post-Roe v. Wade country. You can register online here.  The discussion will be at 6 PM on February 16, 2022