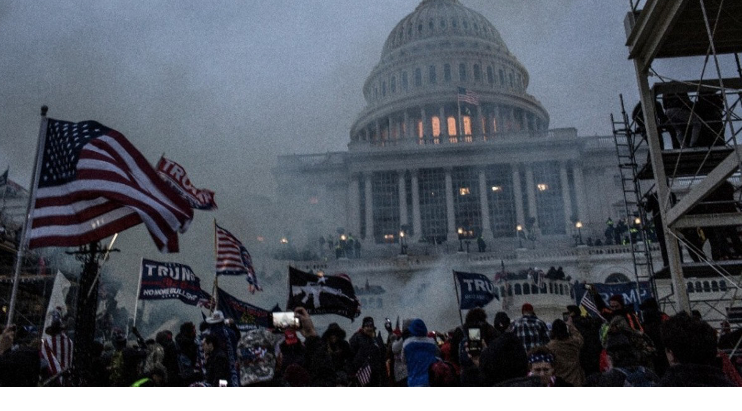 GELFAND’S WORLD - You've got to wonder what those Capitol rioters were thinking.

I don't mean all the Qanon stuff about a secret government of pedophiles and all that. I mean -- did they have any concept at all that what they were doing was against the law? That it was against some of the highest law in the land?

I've said it before but I might as well say it again on this, the anniversary of the Capitol break-in: What happened on January 6, 2021 was analogous to a student takeover at a college administration building in the 1960s. The difference was that the student protesters were, for the most part, not trying to destroy the universities where they were holding their sit-ins. Not only that, the sit-in was largely a tool of passive resistance, and the argument that was being made was one of frustration over a war that wouldn't end and threatened to draft them into its fighting.

But in each case, there was a group of people who believed that their cause was righteous to the extent that it justified breaking into and damaging public property.

There is a big difference, however.

Unlike the protests of the 1960s, the Capitol riot has not continued to spread itself over the country. It has a lot of tacit supporters, but they are forced by exigency to limit the way they speak of the events of January 6.

Allow me to define the major differences.

Nobody would accuse the 1960s student protesters of being motivated by hate. The leaders spoke openly about being for peace and love. There were of course plenty of people who went along for the ride, flashing the peace symbol as just another element in socializing. But the official, public message was to be against violence.

It's useful to remind ourselves that the prevailing political concept at the time among a lot of young leftists was the teaching of Gandhi. The image of students being carried limply out of college buildings came right out of the Gandhi playbook. Resistance was to be nonviolent.

Compare those passive resistance images to the television shots of January 6, 2021. The operant word is hatred. Add an extreme level of violent anger.

There is one additional difference. Remember those pictures of the Proud Boys marching through the crowd in double-file as an occupying army? Remember all those pictures of men dressed in a burlesque of military camouflage? Unlike the 1960s protests -- exactly opposite in fact -- the January 6 rioters are partial to the idea of military power, at least when it is used to their advantage.

The essential idea defining the military is, of course, the ability to direct force and violence as a way of accomplishing one's goals. Our Constitution and our national traditions tend towards the idea of joining the military as a form of patriotic service. It is this idea, and the reality of personal loss, that we honor on our national days of remembrance. But the idea of militarism can be misused and dishonored, and that's what we saw a year ago, just as we saw it in the white power rallies in Charlottesville a little earlier.

They were so proud of themselves.

It was like one of those true stories about a bank robber who left his wallet behind, complete with an ID card pointing to his home address. These lawbreakers and rioters bragged over social media, wrote stories about their heroics on Facebook, and took credit for their actions on Twitter. Why not just hang a poster in the post office showing your own face?

They seem to have been oblivious to the fact that invading your country's capitol will get you into trouble. Admittedly they had been conned by one of history's most accomplished grifters. They seem to have imagined that whatever they did, Trump would protect them, even to the point of pardons all around. They didn't take into consideration that Trump would give out pardons only to the extent that it worked to his advantage, and not out of any sense of loyalty to his many supporters.

The main lessons from the January 6, 2021 attack are threefold:

The first is that the United States government isn't one man or one woman. It's a whole system and there are enough people in government loyal to the existence of the system that it is hard to overthrow. The Secret Service was not about to let the mob catch up with Mike Pence or Nancy Pelosi or any of the other members of congress.

The second lesson is that the administrators and law enforcement agents of this government have long memories and don't fall into insurrectionist, conspiratorial thinking all that easily. They have been determined to track down and prosecute the rioters. So far, they are doing pretty well. It takes a long time to get the indictments, do the discovery, negotiate with defense lawyers, and eventually walk into a federal court to accept the negotiated plea of guilt. But it is happening.

And whatever else you can say about the events of January 6, 2021, the one main conclusion is that the physical act of insurrection did not spread. The idea of a nationwide revolt led by the Proud Boys and others of their ilk must have been in their minds, and it must have included Donald Trump acting more like a 1930s European dictator than the wimp that he turned out to be. He had the power of the pardon and he didn't use it. He could have gone out on the road and tried to whip up frenzied protests in other parts of the country. He didn't.

So far, only a very few Republicans have spoken against Trump in the post-January 6 era. The party is a great disappointment to the American concept, but the union will endure and at some point, the Big Lie that Trump should still be president will dwindle.