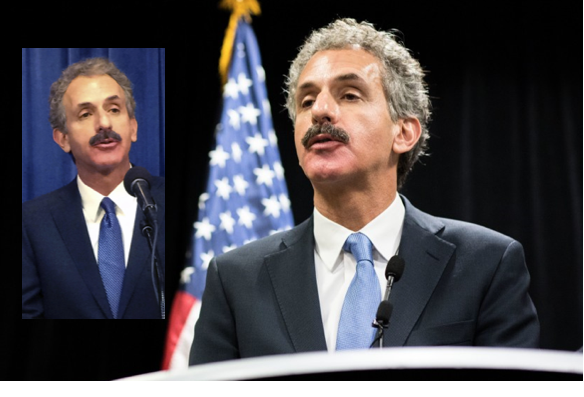 GELFAND’S WORLD - This is being written on the 58th anniversary of the murder of John F. Kennedy.

I'm of the generation who used to say, "Do you remember where you were when you heard?" but we stopped saying it after a while because everyone remembered all too well. There won't be as much said on this anniversary because it is not a round number like 50, but at least for one generation, the phrase November twenty-second will always be jarring. There is, sadly enough, a connection to the next topic, because it includes the American addiction to gun violence.

The election season is starting: First in a series on the candidates

Mayoral candidate Mike Feuer came to San Pedro on Sunday to talk to voters. We met in Pt. Fermin Park for about an hour. The candidate gave a speech in the attempt to introduce himself to the voters, and then spent the rest of the time taking questions.

In person, he comes across as friendly and approachable, and didn't seem to get flustered even when faced with somewhat contentious questions (some of which came from yours truly, your CityWatch reporter). I'd like to comment a bit on one topic that he chose to bring up, even though it is a topic that most candidates in other parts of the country would avoid like malaria.

The topic is guns and their effects on the innocent.

Feuer introduces the topic by talking about a shooting case that seems to have affected him strongly. He went on to push gun control legislation in the state legislature and to prosecute firearms offenses as City Attorney. His views would be the political kiss of death in some parts of this country, but Feuer is unabashedly in favor of trying to bring the epidemic of gun-related murder to a halt.

He also spoke about his efforts to go after crooks and scammers who have made use of the Covid-19 situation to steal peoples' money. This led to talk about the overall issue of consumer rights. Feuer takes credit for filing consumer protection lawsuits as City Attorney.

Several audience questions dealt with the issue of homelessness. I suspect that the reasons are twofold. First of all, the subject is getting a lot of play in the news and on television. But mainly, San Pedro is one of the places that has homeless camps in full view of the public. (Only a few years ago, there really were not a lot of these tents in public view.) It became a subject of controversy and contention a few years ago, with much of the public somewhat sympathetic to the homeless in an impersonal and distanced sort of way, but wishing that the problem would somehow just go away.

The reality that our City Council representative, Joe Buscaino, is also running for mayor and has staked out a position of getting the homeless off of our public streets became a part of the discussion. Feuer's response was that a year ago, he offered a proposed ordinance to the los Angeles City Council that specified what Buscaino is now proposing -- that the city provide shelter to the street-dwellers in exchange for legal strictures against them living on our sidewalks and parks. If you are one of those Los Angeles residents who wants the homeless camps to go away, Buscaino has taken the political lead and Feuer would have a long way to go to catch up. It wasn't really clear what Feuer's ultimate goal would be in terms of the homeless camps, and will be something for future press conferences to explore.

As a wrap up to his presentation, Feuer argued that he has kept all of the promises he made when he ran for City Attorney. If this is the case, then Feuer would indeed be the anti-Trump. The contrast between Feuer and conservative ideology is most striking when it comes to consumer protection and gun control.

In a small group of locals who clustered around him after the formal presentation, Feuer seemed to be cordial. The most striking thing I heard him say is that we should not trust slogans. I think he has a point there, although it also makes campaigning a lot harder. There does not seem to be a Feuer equivalent to "Make America Great Again." Perhaps Mike should work on finding a few words that are at least a summary of what he stands for, even if he doesn't want to call them a slogan.

What I see in Mike Feuer is a deep intelligence that he does not flaunt. At the same time, like any politician who has served over multiple decades in several different offices, he is going to have some baggage. On the other hand, this is an age that does not seem to punish political baggage, as former governor Jerry Brown and the immediately former president showed.

Feuer seemed genuinely innocent or ignorant of that concern. Either he has not gotten personally involved in neighborhood council issues or he is the greatest actor of his generation. He did promise to look into the concern. I also asked him to commit to meeting with our former neighborhood council minute-taker, who has been forbidden to work for pay for the city, although she claims that DONE will not meet with her and tell her officially what the charges are against her. Our view (more than 30 signatories to a petition on her behalf) is that there should be such a meeting and a clearing of the air. Feuer would not commit to a personal meeting, but did agree to look into the question.

At this point in the campaign, Feuer is given little chance to become mayor, but he has come from behind in the past, most notably in his victory over incumbent City Attorney Carmen Trutanich. It could happen again, but Feuer is going to have to deal with the purported scandal regarding the way his office handled a DWP billing issue at every future debate and press conference. I suspect that this issue is of little interest to the public, considering that nobody brought it up.

If I had to grade this performance, I would give Mike Feuer a B+ overall. He gets good marks for his willingness to take any and all questions. He gets marked off for being less than charismatic in his speaking style. In any other campaign, Feuer would face criticism for being the City Attorney at a moment when multiple members of the City Council have been indicted on serious charges. Why, people will ask, didn't he say or do anything? His good fortune is that two of his strongest opponents happen to be members of that same City Council, and will face the same questions.