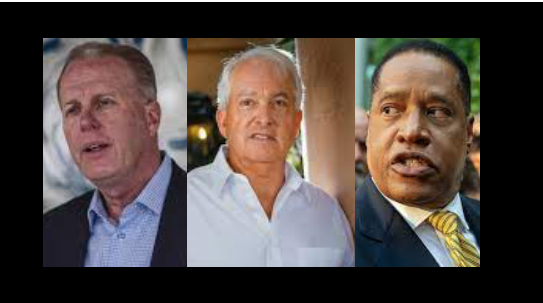 GELFAND’S WORLD - The Republicans want to turn California into Florida. The first way is to turn us into a Covid-19 pesthole. We're speaking of Larry Elder, who promises to abolish vaccine and mask requirements.

Next, we're talking about Kevin Faulconer, who spoke negatively about Donald Trump in 2016 but voted for him in 2020. That certainly shows a remarkable lack of judgment, doesn't it? As for the third candidate, John Cox, we're talking about a guy who couldn't win Student Body President with the support of Frat Row, at least if we are to take his seventeen previous straight losses seriously. OK, so it wasn't that many straight losses, and most of them came in his home state of Illinois. Since he has graced us Californians with his presence, he has decided to spend a large amount of his money running for governor and renting a grizzly bear.

There is a psychological term that a friend of mine used to discuss people who couldn't win as County Recorder but then turned around to run for President. He referred to it as poor reality testing.

Then he ran and lost for California Governor in 2018.

That's more losses than I have fingers on either hand, but he still has, if my count is accurate, a few fingers remaining on the second hand.

At least Caitlyn Jenner won something, even if it was under a different name.

And that leads to the presumptive frontrunner, Larry Elder. Elder is getting a lot of press for his pronouncement that he will abolish vaccine and mask requirements. He seems to be trying to be another Ron DeSantis here. Elder at least has a record as a staunchly conservative voice playing to a particular subset of the radio market, but his timing seems to be a bit off here. The red states which are resisting Covid precautions are showing alarming increases in Covid cases and deaths. Even local school districts in Florida are resisting the governor.

But for ideological reasons, Elder is attempting to step into the DeSantis shoes.

There is also the guy who is at least putting together decent television commercials. I'm referring here to Kevin Faulconer. Of course, Faulconer tends to run more as a middle of the road Democrat. He is pro-choice. He actually agrees that global warming exists -- imagine that-- in this week of heat waves and hurricanes. But in spite of the existential threat of global warming -- in other words, it could destroy much of civilization and a lot of the world -- Faulconer states that he voted for Donald Trump in 2020.

In other words, Faulconer was and is looking for another high-elective office and has no respect whatsoever for logic or truth. Otherwise, how could he vote for the chief spokesman for the anti-global-warming people?

Put all the Republican candidates together and you get a kind of watered down Donald J. Trump. They lack Trump's facility for grandiose lying, and none of them has, so far, managed to mobilize the white supremacists the way Trump has. But they are running as Trump Republicans.

There's also the usual political nonsense. Cox looks out at the audience in his television ads and promises a 25 percent tax cut. It's not clear whether that refers to income taxes or sales taxes, but how could this be accomplished without adjusting property taxes upwards? In other words, is Cox talking about repealing Prop 13?

You can see just by the question how ridiculous the promise is. Yet Cox is paying out a lot of money to look you in the eye and tell you what you already know to be nonsense.

My suggestion to all the Republicans running in this recall is to run in your own primary in June of 2022. That's right, the next statewide primary is in less than 10 months. Why, you might ask, are the Republicans trying to steal the governor's office this close to the next real election? I think it's obvious. They couldn't win the seat any other way.

A bit of malpractice on the part of the usual suspects

This question came up the other day at a discussion among volunteer activists who are working to prepare the people of Los Angeles against a big earthquake. There are a few things that people ought to hear so that they can prepare themselves. For example, a big earthquake would likely break our water mains, so we would be without running water. We would also be without gas to run our stoves and heaters. And you can kiss electric power away for perhaps weeks. Cell phones would probably be unworkable within a few hours, because the cell phone towers don't carry a lot of battery backup.

So we've put together a few suggestions for all of you, starting with the need to keep some water supplies around. (By the way, most of us took this list and other items directly from what we heard at talks by seismologist Lucy Jones half a dozen years ago.)

Three years ago, I started asking the Department of Neighborhood Empowerment (aka DONE) to include an emergency preparedness page on its website. Everybody agreed that this was a fine idea, and we should do it. Understand -- nobody at DONE actually did anything about it, they just agreed with the idea in principle. They did all sorts of other things that were expensive in money and human hours. They insisted on neighborhood councils creating additional unpaid volunteer positions such as emergency preparedness liaisons, or whatever we were called that year.

But the one place on the internet where every neighborhood council person is advised and even urged to visit, now called the Empower LA website [empowerla.org] still lacks such an elementary presence. Just as examples of what they did find expeditious to create, here are some of the links at the top of the front page:

Just in case you were interested EVG stands for (I have to look it up here) EmpowerLA Virtual Governance. It's a not-unreasonable approach to advising neighborhood councils how to function during times of pandemic. Actually, it's not so much advice as direct orders in how to run your meeting, but at least it includes a link to an online course in parliamentary procedure.

Now how about spending a few dollars to advise the mass of Angelenos in how to preserve their own lives during and after a massive earthquake?

Not so much, I guess.

So at that Saturday meeting, I asked. There was a DONE representative present in this online meeting, and when asked about the failure (after three long years) to create even a one-page list of links, we got the usual dissimulation: The Department has lost staff and is waiting to replace them and there isn't a budget for Information Technology stuff and you know the drill. There's always an excuse for not doing what the mayor forgot to mention.

So I kind of stuck my foot in it, I must say. I wondered out loud how much money and how many staff hours had been spent putting together that other absurd proposal -- the one that would allow DONE and its General Manager to throw elected board members out of neighborhood councils based purely on allegation and entirely without right of appeal. We do know that it was a lot of hours of staff time from multiple agencies.

The DONE representative's response was actually kind of interesting. He said that he was not going to talk about the new code of conduct. It kind of reminded me of those responses we used to hear from the Trump press secretaries. It seems to me that DONE's failure to create a one-page information sheet on its website is a legitimate problem to examine.

We like to say that the purpose of DONE is to assist neighborhood councils in what they want to do. That was the approach taken by Greg Nelson as General Manager, and it worked well for us back then. And emergency preparedness outreach is clearly, most definitely something we want to do.

It is something that the mayor ought to be directing DONE to assist us in doing. And most importantly, it might actually help make a few peoples' lives safer and more comfortable if the ground starts shaking next week or next month.

Instead, we have to put up with these little power plays by our city staff members.

Conservatives like to say that government can't work, so we should have the least government possible. There is an alternative that has, on occasion, worked well. It is a kind of liberalism exemplified by Charles Peters (onetime head of the Washington Monthly) who suggested something different: Not only can government be made to work, we have to work to make it work well, because it has important tasks. That is actually a pretty good description of modern liberalism.

It's also why I suggest a vote of No on the recall.

(Bob Gelfand writes on science, culture, and politics for CityWatch. He can be reached at [email protected]t)