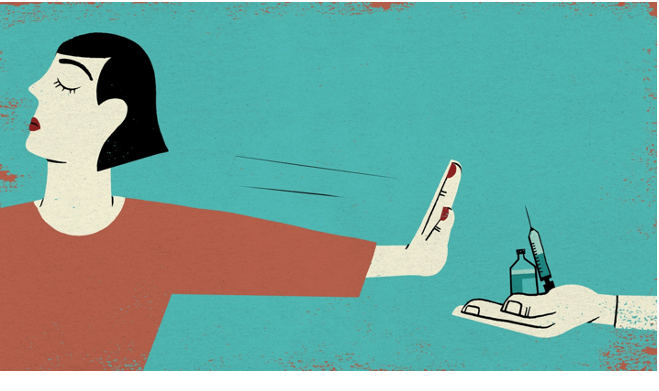 GELFAND'S WORLD - A few days ago, I added a comment to a CityWatch article written by somebody else. The article was a somewhat sympathetic take on getting past vaccine hesitancy.

I think, in retrospect, that we (myself included) should be supportive of everyone who makes the jump into vaccinated status. In my comments I added a few historical items about some historic vaccine failures and how those failures affected the modern system of vaccine testing and licensing.

In that same comment, I found fault with the former president for his part in creating this impasse throughout the country. I stand by that comment and wish to expand on it below.

I tend to bring up the story of smallpox for a couple of reasons. The main one is that I come from that generation that was universally vaccinated against smallpox shortly after birth. Most of us had a vaccination scar on the arm or the upper leg, and this was literally our proof of vaccination in those times.

The point was to keep smallpox from getting loose in the United States. Without that vaccination process, we would have had millions of people dying in periodic epidemics.

But before the advent of the Jenner smallpox vaccine, some people attempted to protect themselves and their children by inoculating themselves with live smallpox. Various ways of doing this had been around for about five hundred years. And as you might imagine, sometimes it worked well, providing lifelong immunity. Other times it resulted in the disease and sometimes death.

So there is a history going back half a millennium of inoculating against disease, with no guarantee that the process itself wouldn't kill you.

When Jenner introduced his new approach and even gave it the name "vaccination," there were those who were the "vaccine hesitant" of their day. Not all were ignorant or maniacally skeptical. They just weren't sure that Jenner's method was going to work as well as the older, tried and true method. Eventually the Jenner method was adopted all over the world.

You will notice that we are not giving smallpox vaccine scars to babies anymore. The vaccine worked so well that smallpox has been absent from the human race since the 1970s.

But we have to understand that inoculation against smallpox was an art with a dreadful failure rate that was gradually replaced by scientific proof that Jenner's method worked pretty much perfectly.

Except it didn't. The smallpox vaccine, even in modern versions given in the 20th century, killed about one in every million people who received it. We won't go into the reasons here, but they were real, although admittedly rare.

The next worse vaccine disaster was, of all things, with the Salk polio vaccine. I'm also of that generation. Parents and children alike feared polio. We all knew somebody who had to use crutches to get around. The polio virus occasionally killed someone. There was plenty to fear. I can remember that when the polio vaccine was accepted as safe and effective ("effective" was the critical point in those days), the students at my elementary school were lined up and given the shot. It is a strange and interesting memory, the hundreds of my fellow students waiting to get stuck.

But there was one batch from Cutter Labs that was contaminated by infectious polio virus. The result was tens of thousands of infections, dozens of paralytic cases, and a few deaths. This is an important point in the development of vaccines against infectious diseases, as it resulted in changes to the way this country allows vaccines to be developed and sold.

Vaccine skeptics also remember our attempt to create a vaccine against a strain of influenza that threatened to do a lot of damage when it reached our country. The strain was called "the swine flu" due to the suggested animal vector, and there was a major effort to develop a vaccine. After a few tens of millions of people were inoculated with the swine flu vaccine, about one in every hundred-thousand developed Guillain-Barre syndrome. Later influenza vaccines do not seem to have that level of side effect, but the authorities are always watching.

None of this has anything to do with our modern anti-vaccine movement, which is almost completely based on nonsense. There are still a few people who want to claim that the measles-mumps-rubella vaccine can result in autism, in spite of studies on more than ten million children, showing definitively that this is not the case. In truth, anti-vaccination hysteria is basically a paranoid fantasy that is attempting to link itself with a political movement.

And that's where the comments about our former president come in.

To start with, I don't think we can fault Donald Trump for his actions during the earliest days of the Covid-19 epidemic. There were a few cases of Covid in Americans (mainly on a cruise ship) and they were quarantined. This was proper, even as our news media played up the discomfort endured by passengers who were essentially prisoners on a floating jail. Eventually a few cases (less than two dozen) cropped up on American soil. The president was reassuring, suggesting that the virus would, soon enough, go away. Fifteen cases would go to zero cases, and we would be fine.

I'm guessing that some of Trump's advisers had made this prediction to him. After all, that is what generally happens when we have a measles outbreak, and even the Ebola outbreak was contained on this continent.

But Covid-19 is different, because it is new to us humans and unlike measles, we don't have herd immunity against it (due to vaccination) in this country. It also has one characteristic that gets in the way of trying to contain it through contact tracing -- somebody who is without symptoms or only partially symptomatic (maybe a little coughing and sneezing -- nothing out of the ordinary compared to a seasonal allergy) can spread it to the public.

So the virus spread, we got a series of daily press conferences where Trump rambled in his Trumpian way, and once in a while he said something (obviously hoping to reassure the public) that was just plain bonkers from a medical and scientific viewpoint. Comedians still get laughs out of mentioning his suggestion to use caustic substances internally (or was it ultraviolet light) as a treatment.

And this is where the presidential eccentricity became a problem. The former president seems to be entirely unable to admit that he made a mistake. We saw that in the comical attempt to redraw a hurricane forecast to include Alabama, and we have seen it in the increasingly fervent attempts to undermine the advice of the nation's top medical advisers. It would have been curious -- in any other country or in this country at any other time -- for the target of such vituperation to be Dr. Anthony Fauci. Here is a guy who has spent a lifetime learning medicine, practicing the specialty of infectious disease medicine, contributing to the science of viral disease, and administering a national agency dedicated to studying and combatting infectious diseases. It is quite a record.

But Fauci ran afoul of the right-wing political machine for some reason. The most likely explanation is that in a few instances, Fauci gave honest answers to questions about some of Trump's unscientific assertions. Early on, Trump liked to make claims about treatments (hydroxychloroquine) that turned out to have no basis in reality. Hospitals tested those drugs on Covid-19 patients and through careful analysis, showed that they had no useful effect.

It was really no different than lots of other failed trials. Extract of apricot pits containing cyanide is not an effective treatment for cancer, even though there are still a few people who recommend Laetrile. The rest of the medical world has moved on.

When asked, Fauci did not support the use of hydroxychloroquine for Covid-19.

Donald Trump is incapable of admitting that he was wrong. In his public commentary, he didn't make a mistake, or guess wrong, or even flat-out contradict himself. Combine that with his following, who slavishly support his every emotional need, and we have the current condition. Dr Fauci has to be wrong and has to be dishonest simply because Donald Trump has to be right and has to be telling the truth. The fact that this is contrary to what careful, critical analysis tells us is irrelevant to that side of the political spectrum.

So, the result is a perfect storm of anti-vaccine people and Trumpist true believers opposing everything that the top government agencies are telling them. This seems to be in service to some deep-seated emotional needs on their part. But it is also lethal in too many instances.

For any medically normal person (i.e.: without an immunodeficiency) if you have not yet had the vaccine, you have fallen victim to the anti-science and political anger of one side of the political spectrum. The problem is that it may kill you. We are now starting to see a few cases of celebrated right wing radio personalities and politicians who are seriously ill or already dead from Covid-19. Some of them have made death-bed recantations, telling people to get the vaccine.

Out of the nearly two-thirds of a million Covid-19 dead in this country, we have to conclude that we could have prevented a couple hundred thousand had there not been the Fox News and right-wing movement to discredit the U.S. government.

This is not to say that the government always tells the truth, but that some judgment is involved in figuring out when we are being lied to, and in this case, the right wing represents the bad judgment.