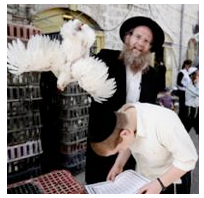 ANIMAL WATCH--Amid activists’ videos and photos of hundreds of chickens crammed into battery cages, shoved into trash bags -- still screaming -- after having their throats slashed, and one drowning in a bucket of its own blood during recent Kapparot rituals in West Los Angeles -- LA Animal Services Director of Field Operations Mark Salazar told Commissioners on Oct. 13 that a report had been sent to the City Attorney to determine whether charges will be filed in regard to the conditions of the animals.

Salazar repeated several times that the Department was very careful not to interfere with the religious observers’ First Amendment Rights during the slaughter of the chickens and that he could not discuss any details of the ongoing investigation.

A September 15  City Watch article, “Jewish Activists Pleading for LA Animal Services to Stop Slaughter of Kapparot Chickens,” explained that Yom Kippur, the Day of Atonement and the holiest day of the year for Jews, would begin on the evening of September 22 and end the evening of September 23, 2015. During the week before, a small faction of members of the Jewish faith engages in what many Jews and activists believe to be an archaic, unnecessarily cruel rite called “Kapparot,” in which the sins of a human are symbolically transferred to a chicken.

The chicken is grasped by its wings, clenched tightly together across its back, and swung in a circle three times above the head of the person whose sins are to be expiated. The bird’s throat is then slit by a ritual slaughterer and its blood flows into open containers and onto the streets.

The activists state that, in Los Angeles, this has resulted in unlicensed sales of live hens that go without food or water for over 24 hours. The birds are packed in overcrowded cages in the hot sun for hours, waiting to be killed.

At the September 8 Commission meeting, advocates pleaded for LA Animal Services to assure that this blatant neglect and cruelty to animals -- something which has been denounced by Rabbis all over the world – would not be allowed to occur. They explained that the majority of observant Jews already use coins in place of live fowl.

Director Salazar emphatically assured attendees that LA Animal Services “will be ready and available” to respond to animal cruelty calls at Kapparot locations and that inhumane mistreatment cases are taken “very seriously.”

Salazar told the Commission that some convictions have resulted in jail time. He assured Commissioner Jennifer Brent, “We respond to all types of humane violations the same, it doesn’t make a difference what activity is going on…our concern is for the animal.”

He promised that a call to the (1-800) complaint number or the Anti-Cruelty Task Force at LAPD would guarantee response by an officer.

However, on Oct. 13, the same activists tearfully described to the Commission their dismay and anguish at having to make repeated calls to get response from LA Animal Services when they identified two West Los Angeles Kapparot locations -- where they took the disturbing photos and videos that had even the most stoic viewers wiping tears from their eyes.

They described repeatedly dialing the LAAS (1-800) complaint number for over an hour and then waiting another two hours before an Animal Control Officer arrived. They said that, when someone finally answered the phone, the person seemed confused and totally unaware of the issue.

Salazar assured them that one chicken was seized and a report was filed with the City Attorney to determine whether charges will be filed in regard to the conditions of the animals at the location.

Mark Salazar reported that officers responded to two locations. A complaint was received on Sept. 16 at 9:45 p.m., but only one night officer was available, and his arrival at Livonia Avenue came a full two hours later. He said dead and live chickens were in a vehicle in the driveway. A dead fowl in the back of a truck was not properly disposed of, but no contact with residents could be made. Officers issued an administrative citation and followed up the next day. The resident then denied performing Kapparot and had disposed of the carcass; so the case was closed.

The second investigation was on Sept. 21. Salazar admitted numerous calls were received throughout the evening and night. Officers responded at 11:00 p.m. to a call received at 10:21 p.m. about a “huge chicken-killing operation” in the 7200 block of Waring Ave. He said hundreds of birds were in battery cages but no violations were found. Officers returned the following morning and “found concerns” and opened an investigation. They impounded one chicken. He did not say whether the Animal-Cruelty Task Force was called but stated that a number of witnesses were present and interviews are being set up.

Commissioner Roger Wolfson asked about the treatment of animals during the slaughter, and Salazar said the City Attorney advised the department not to interfere once the ritual began.

Rabbi Jonathan Klein of Faith Action for Animals described the excruciating suffering of Kapparot animals. He also announced there were less sites this year than before, which proves activism is working. He said monitoring by LA Animal Services was passive, rather than active and that no one had been assigned to respond. The most effective way was to text Mark Salazar directly, but there was a huge “lag time.”

He suggested that a cooperative effort between three levels of government -- Animal Services, County Health Department and CA Food and Agriculture -- could have shut down these operations as illegal slaughter houses, since there are serious health violations and organizers claim the dead animals are donated to the poor as food. However, this must be done by officials, not activists.

Sara Jane Hardt, activist and photographer, showed photos and spoke about the children “covered with blood” and blood spattered on viewers’ clothing. She described desperately calling the LAAS (1-800) number but said it shut off at 6 p.m. and it later took one hour to reach anyone and two hours for response. She asked, “Where was the ‘point person?’ And, where was the ‘go-to’ number?”

She described being punched by a man who was one of the organizers while she was on public land. She called LAPD and pressed battery charges and said she later discovered he had an outstanding warrant for sexual battery.

Veterinarian Sherstin Rosenberg said, “I am shocked that LAAS was able to see this and not see that animal cruelty was going on.”

Another speaker commented, “I witnessed this and gave information to the LAPD officer.” Why hasn’t someone questioned me? LAPD also has not called about the young woman being punched in the face. The City is letting us down.”

Mark Salazar said the department is pursuing the investigation and “working with the City Attorney to try to prepare for filing before the end of the month.”