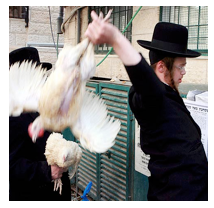 WHEN RELIGION AND ANIMIL RIGHTS COLLIDE--Yom Kippur, the Day of Atonement and the holiest day of the year for Jews, begins on the evening of September 22 and ends the evening of September 23, 2015. Los Angeles boasts of being the humane capital of the U.S., yet, during the six days preceding Yom Kippur, a bloody spectacle occurs annually in parking lots and alleys in the Pico-Robertson area of West Los Angeles. This is when a small faction of members of the Jewish faith engages in what many Jews and activists believe to be an archaic, unnecessarily cruel atonement rite called “Kapparot.”

During Kapparot, the sins of a human are symbolically transferred to a chicken. The chicken is grasped by its wings, pulled tightly together across its back, and swung in a circle three times above the head of the person whose sins are to be expiated. Chabad.com states that the following words are spoken, "This is my exchange, my substitute, my atonement; this rooster (or hen) shall go to its death, but I shall go to a good, long life, and to peace."

A ritual slaughterer (shochet) then slits the bird’s throat and the dead animal is supposed to be donated to feed the poor. Los Angeles Jewish activists stated at the Animal Services Commission meeting on September 8 that the killings at these parking-lot ceremonies often do not meet Kosher standards; and the screams of the chickens are haunting, as their blood flows onto the pavement and street.

They also claim that this practice has resulted in unlicensed entrepreneurs--more interested in making money than the welfare of the animals--selling injured or unhealthy chickens directly from overcrowded cages kept in hot sunlight for hours. The price per bird has been reported in a range of $18 to $35 by various sources.

The birds are typically older, arthritic, factory-farm hens that have been used for egg production, according to a veterinarian who testified. They have already endured hours or days without food or water. The end of their torturous lives is spent brutally crammed into battery cages in which they cannot move or stand, only to then be handled and killed in a needlessly painful manner. Sometimes they remain barely alive, left to suffer in black garbage bags with those who have preceded them in this “ritual.”

Small children are brought to Kapparot and can be included in the rite as a parent swings a chicken over the child’s head. The activists described observing the trauma that children suffer at the Los Angeles sites and their concern about desensitization to the pain and brutal treatment of animals. A personal observation was shared of a child who rescued a small hen that had escaped. He held it in his hands, tearfully begging for its life to be saved.

The advocates who attended the meeting stated that they will be haunted forever by the anguish and pain of the Kapparot animals that they have personally heard and observed. They pleaded for help from Animal Services to assure they, and other deeply disturbed residents of the surrounding communities, would not again have to face a week of watching the blatant neglect and animal cruelty surrounding this ceremony – a ceremony that is religiously unnecessary and has been denounced by rabbis all over the world. 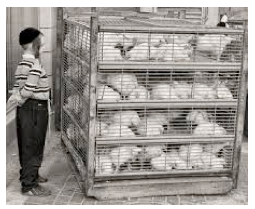 Speakers emphasized that they are not requesting interference with religious freedom. The Kapparot rite they are opposing in Los Angeles creates suffering for the animals due to the circumstances under which they are kept and handled. They explained that coins are now used by the majority of observant Jews.

They asked merely that an officer be assigned as a direct contact or be available to respond to a location where they identify cruelty to Kapparot chickens in Los Angeles. They want an officer to personally observe any animal neglect and abuse and to take appropriate action to enforce California State anti-cruelty laws and City ordinances.

Los Angeles Municipal Code Sec. 53.67 prohibits participation in any animal sacrifice, or possessing or selling any animal with the purpose or intent of using it for animal sacrifice. The code defines 'animal sacrifice' as “the injuring or killing of any animal in any religious or cult ritual…wherein the animal has not been injured or killed primarily for food purposes.”

In a September 23, 2014 post to the Jewish Journal, Compassionate Kapparot: Use Coins, Not Chickens, Rabbi Jonathan Klein, Founder/Director of Faith Action for Animals, explained that in 2013 factory-farmed hens at three known sites were sold for use in “Kapparot” in the city of Los Angeles.

Rabbi Klein described, “While alive, these chickens endured horrific heat, without food, water or shade, feces and urine covering those on the bottom layer of the battery cages.”

He denied claims that the dead animals were then given to the poor or to a food bank, stating that no food bank could accept chickens from these unlicensed operations, due to “disregard for food safety laws.”  “After they were slaughtered,” he wrote, “their carcasses were simply dumped and incinerated…”

The Rabbi and his many colleagues who spoke at the meeting brought tears to the eyes of those in the room, as they described their emotional torment and encouraged a “Compassionate Kapparot” ceremony, using money instead of chickens.

A veterinarian stated that those engaging in Kapparot are told pulling back the wings calms the chicken. But, in actually, the terrified bird that is being gripped in this unnatural position is suffering extreme pain and is powerless to protect itself.

A film by the Alliance to End Chickens as Kaporos features Rabbi Yonassan Gershom, a Bresov Hasidic rabbi, who also refutes that holding a chicken by its wings makes the bird calm and relaxed, “The bird is terrified, it is playing dead, the way it does if it is grabbed by a dog or a wolf. It is hoping you will let go so it can escape.” He states, "… our Torah does not require this, it will not cancel your sins. I beg you, please give money, instead of hurting one of God’s living creatures.”

In 2013, Pico-Robertson neighbors, activists, and the media documented “the mockery of decency,” Rabbi Klein explained in his Jewish Journal article.  He reports that after a week of Kapparot protests, repeated calls to the [County] health department, city agencies including Sanitation, and Councilmember Paul Koretz’ office--who sent an advisory to Jewish organizations in his district that the practice violates LA Municipal Code—the California Department of Food and Agriculture shut down the three operations.

Activists indicated that the 2013 enforcement may have driven Kapparot celebrants underground in 2014, but that does not mean it will not take place in Los Angeles this year. They implored LA Animal Services to provide enforcement should these inhumane practices be identified in the city during the approaching holiday observance.

Director of Field Operations Mark Salazar, on behalf of Animal Services, stated that a call to the Department’s complaint number or the Anti-Cruelty Task Force at LAPD would guarantee response by an officer.

The Commission was unanimously and passionately supportive of Animal Services promptly addressing any animal abuse or neglect issues in conjunction with Kapparot in Los Angeles. It ordered that a follow-up report be provided by the Department. Commission President David Zaft stated that allowing any cruelty to innocent animals is “a sin by all of us.”