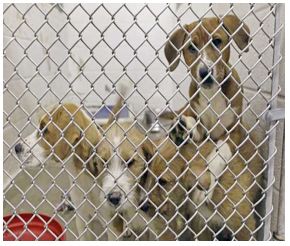 ANIMAL WATCH-On October 30, 2013, LA’s Chief Zoning Administrator Linn Wyatt issued a Zoning Administrator’s Interpretation (ZAI) exempting “pet shops” from t he requirements for “kennels,” if they offer four or more adult shelter or rescued dogs for sale.  This contradicts LAMC Section 12.03 of the Zoning Code which defines a kennel as, “Any lot or premises on which four (4) or more dogs, at least four (4) months of age, are kept.”

The ZAI was requested by LA Animal Services GM Brenda Barnette, according to the Planning Department.

A Writ of Mandate petition (BS147232) was filed in Los Angeles Superior Court on February 10, 2014, contending that the Zoning Administrator had exceeded her authority in granting special privileges to favored operators that would exclude them from the requirements of the zoning code.

The ZAI was the stepchild of the ordinance (CF11-0754), introduced by Councilman Paul Koretz, which banned the sale of commercially bred dogs, cats and rabbits in pet stores. It was passed by the Council with much “feel-good” media publicity on October 31, 2012.

In the justification for that ban to stop “puppy mills” (none of which are in Los Angeles) the Council also required pet shops “to obtain their animals from public and private shelters or rescue groups.”

The Council was assured this “new business model” for pet shops was a successful part of such bans in other cities. That was not true. Other “mill-bred” puppy bans allow shelter animals to be offered in existing pet shops, primarily by rescue groups, but do not require pet shops to acquire them.

Historically, pet shops are in commercial (C-2) zones and only offer puppies under four months of age.  They are automatically regulated as kennels by the LAMC zoning code if they maintain more than three dogs over that age (adults.) Similar kennel codes in other jurisdictions are not changed in conjunction with “mill-bred” puppy bans.

Without notice, the ZAI robbed every business citywide of important protections against having a dog kennel next door, maintaining an unlimited number of adult shelter dogs of any breed or temperament, 24/7. Residents within 500 feet also lost important quality-of-life, health and safety provisions previously imposed by LAMC Sec. 12.03.

However, any private boarding or training facility housing adult dogs in Los Angeles still needed to follow the Zoning Code and obtain a Conditional Use Permit to maintain four or more dogs on any property not in an M-1 industrial zone. This is to avoid nuisance and public/animal health hazards, including barking, waste disposal, drainage and the spread of disease/parasites.

The ZAI  left all decisions as to excessive noise and number of animals up to the GM of Animal Services. It contained no qualifications for “pet shop” owners and was devoid of restrictions and requirements to protect the health and safety of the animals and the public.

Attorney Harold Holmes argued that the amount of noise, effluence and impact on the environment generated by shelter dogs at pet shop is equal to that of dogs boarded for owners at private kennels, and that the City was engaging in favoritism and failing to provide equal protection under the law.

Los Angeles Superior Court Judge Joanne O’Donnell issued an Order on May 27, 2015, that the, “City of Los Angeles Zoning Administrator’s Interpretation which excludes “pet shops” from the definition of “kennels set forth in Section 12.03 of the Los Angeles Municipal Code (No. ZA-2013-3104-ZAI, issued October 30, 2013) exceeds the Zoning Administrator’s authority and is thus an abuse of discretion.” The judge also ordered that a Writ of Mandate issue. (Daugherty vs City of Los Angeles)

Who Really Orchestrated The ZAI? A California Public Records Act request to then-Mayor’s Villaraigosa’s office produced e-mails to and from legislative deputy Jim Bickhart which show he personally wrote the template wording and lobbied for changes to the LAMC that would remove “pet shops” with adult animals from zoning code sections enforced by the Department of Building and Safety.

He argued at the October 2, 2013, Personnel and Animal Welfare Committee (PAW), for adding a section to the pending “puppy mill” ordinance that would remove zoning impediments to non-profits opening shelter-dog pet shops by exempting this “new business model” from the Conditional Use Permit (CUP) requirement. He contended this was essential for Paul Koretz’ “puppy mill” ban to have its desired effect.

That same day Jim Bickhart discussed in an e-mail to Richard Llewllyn, then-Chief of Staff to Councilmember Paul Koretz (now legal counsel to Mayor Garcetti) what he had verbally presented at the PAW meeting:

“…[W]ith the assent and backing of a key player in the local humane community (Aimee Gilbreath, ED of the Found Animals Foundation), I suggested that there’s a fixable problem in the LAMC that, left unfixed, could prevent a key aspect of Paul’s pet shop…ordinance from falling flat on its face.”

Llewellyn wrote that this seemed like a land-use matter and inquired about environmental analysis, approval by the Planning Dept., Neighborhood Councils, HOA’s, etc.  Bickhart responded that he had not yet consulted with anyone except supporters of the “mill-bred” puppy ban ordinance.

He assured Llewellyn, “As you will see, I think I’ve got a pretty simple solution that only needs a bit of review and wordsmithing from the City Attorney.”

“I think it is a stretch (and a self-fulfilling disaster) to consider what I proposed a land-use amendment...Years of experience tells me that if they’d just go ahead with the kind of solution we’re proposing, there’s a 99% likelihood it would go through Council unnoticed and that would be the end of that.”

Was it an oversight that the March 26, 2013, report by former-City Attorney Trutanich advising that, “Amendments to the Planning Code must be referred to the Planning Department pursuant to the City Charter,” were omitted in the October 23, 2013, report by new City Attorney Michael Feuer?  The initials “DL” appear as author of both, and Dov Lesel approved two widely differing versions of a Draft Ordinance as to form and legality.

On November 16, 2013, CF11-0754-S1 ((Definition of Kennel and Pet Shop / Los Angeles Municipal Code / Amendments) was approved by Koretz’ PAW Committee without public vetting because it did not indicate in the title that zoning was affected.  There was no Planning Director or Planning Commission review filed, and the City Council’s Planning and Land Use Management Committee (PLUM), chaired by Jose Huizar, waived public hearing.

No Council Questions-Guidestar reveals the billions of dollars donated annually to humane organizations, whose high-profile legislative activities now contain reminders of how many votes can be affected by their endorsement.  This explains why more than altruism can motivate the desire of politicians to promote, without question, the latest laws popular with animal lovers.

Mayor Garcetti signed CF11-0754-S1 on December 6, 2013.  The cover sheet was marked “approved” by the Planning Commission and Director of Planning, and the City Attorney.

Jim Bickhart left City Hall at the end of Mayor Villaraigosa’s term, but was recently hired (as Speedway Policy Associates) under a personal service contract to Councilmember Bob Blumenfield and currently under a contract with Paul Koretz.