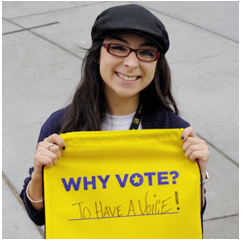 POLITICS - The good news for Republicans is that they are no longer a dying party.  The bad news is that they are dead, and the final dagger into the corpse was the huge turnout of young voters on Election Day – the exit polls show that 18 to 29 years olds made up 28 percent of the 2012 electorate.

This turnout was vastly different than the Field poll and other analysts anticipated, and it was driven by Proposition 30.
The tax measure, combined with labor’s huge turnout effort to defeat the anti-union Proposition 32, were turnout drivers for Democrats across the state, combined of course, with the Obama juggernaut that gave California a 2012 electorate very much like the 2008 Democratic landslide year.
That is fundamentally why Republicans did so poorly in legislative and congressional contests, even when their own polls showed they would win.
Proposition 32 should have been on the primary ballot but legislative Democrats cleverly moved it to the general election because they knew it would be easier to defeat and could help turn out the vote.
Proposition 30 is more complex.  Gov. Jerry Brown initially wanted a vote on an extension of the 2009 taxes – which fell on consumers – but short slighted legislative Republicans bowed too far right, anti-tax bloggers and blowhards, and would not cut a deal to put those taxes on a special election ballot.
Had they done so, a tax increase measure at a 2011 special election would have lost just like it did in 2009, and the tax battle would have been over.  Instead they allowed Brown to reshape the tax measure into a tax on the rich, much more politically palatable, and then place it on the high Democratic turnout 2012 ballot where the Obama landslide largely carried it to victory.
By shaping it as a battle to save the schools and stop tuition hikes, Brown managed to use Proposition 30  to generate the huge youth turnout that toppled all the 2012 turnout models and led to Republicans losing every single competitive legislative race except a Senate seat in Stockton, and they may lose that when all the votes are counted.
Two conclusions emerge: there is no state Republican Party left and its numbers in the legislature make it irrelevant, but individuals do matter.
Charles Munger, Jr. put significant dollars into some Republican on Republican legislative and congressional races, and he won.  If he remains involved, he can fund pragmatic and electable Republicans in competitive districts and in 2014 the GOP might be able to rise above one third in the Senate and the Assembly.
Second, it is time to let Howard Jarvis rest in peace and stop pretending we are still in the world of Proposition 13.  On Tuesday 85 of 106 school bond measures passed, according to the League of California Cities.
Californians clearly want more public resources; the question now is whether that money is spent wisely.  That is where the Republican and business focus should be.
For years, the anti-tax zealots have been a tail wagging the old flea bitten Republican dog.  Well, now there is no dog; only fleas.  Republican legislators should never have let themselves be cowered into not working out a tax deal in 2011, and they need to recognize now that the anti-tax crowd is all hat no cattle.
As we saw in 2012, the open primary and top two runoff allows the election of pragmatic and more open minded Republicans that would have lost under the old closed primary.
The conduct of the Republicans in office over the next two years will determine if they can ever rebuild.  But they have to recognize that the political world in California was changed for good in 2012.
(Tony Quinn is a political commentator and former legislative staffer. This column was first posted at foxandhoundsdaily.com) –cw
CityWatch
Vol 10 Issue 91
Pub: Nov 13, 2012