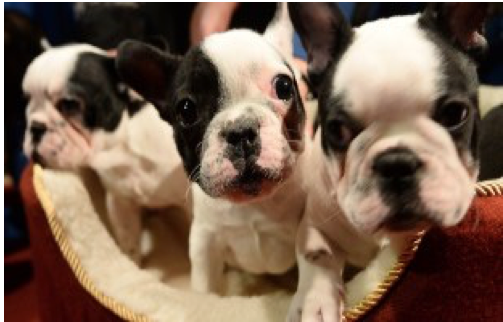 ANIMAL WATCH-“We are opposed to puppy mills," stated Las Vegas Mayor Carolyn Goodman on Wednesday, as the City Council discussed repealing a ban which would have restricted local pet shops from selling dogs, cats and potbellied pigs not obtained from an animal-care facility or rescue organization. "This will not affect puppy mills,” she said, “They’re going to continue to be there.”

Mayor Goodman, who openly favored the repeal, plans formation of a committee to address all inhumane breeding and "stamping out 'puppy mills'--large-scale and inhumane commercial breeding operations," reports the Review Journal. The ban, passed in 2016, would have become effective on January 6, 2018.

Clark County Commissioner Chris Giunchigliani sponsored a county ordinance that would have had the same effect as the city’s non-rescue ban, but county commissioners put that measure on hold last month. She said she’s formed a work group with City Council members to come up with parallel ordinances in the county and city.

Speakers who supported the repeal argued that city residents deserved a choice in the animals they want for pets.

Those in favor of the ban claimed it was a step toward closing puppy mills and increasing shelter adoptions. One stated that she had traced puppies in one of the city's two pet shops to an out-of-state breeder.

Josh Jones, the director of legislative and regulatory engagement for the Pet Industry Joint Advisory Council (PIJAC), in a statement, called the city’s ban a “misguided effort to stop unethical breeders,” and contended pet stores are highly regulated.

Councilwoman Michele Fiore, who was concerned about closing businesses, told the Las Vegas Review Journal on November 8, “Unfortunately, I don’t think people are understanding that this ordinance wasn’t very well thought through.”

She pointed out that many available rescue dogs have Pit Bull in them, and this breed is often banned from rental properties. She suggested, "A measure placing more checks on from where pet stores source their animals could follow a repeal of the ban."

Councilman Stavros Anthony said, “(T)here’s a push by cities from all over the country to stop puppy mills. Las Vegas should be at the forefront.”

Petland owner Jeff Fausett explained that he sources dogs from about 150 breeders, and asks the American Kennel Club to inspect their facilities, adding, “Closing us doesn’t eliminate puppy mills because we don’t use puppy mills."

Regardless of the local or state rules, those seeking puppies can easily obtain their breed of choice online, Fausett said, "So a ban on non-rescue animals could drive people to the black market."

“This is not the solution to end substandard breeding facilities, nor will it decrease the number of dogs we have at the shelter,” said Kathleen Vinhuan, manager of the Puppy Boutique.

The repeal was affirmed by a 4-3 vote, following hours of comments from 34 passionate public speakers on both sides. There were assurances by the Council that officials will work on new restrictions to crack down on inhumane breeders.

DOES A PET SHOP BAN ASSURE HUMANE SOURCING OF PETS?

As in California and other cities across the country, the proposed Las Vegas ban did not consider the fact that "rescuers" -- a nationwide unregulated, non-licensed and unmonitored industry of groups or individuals -- were, along with animal-care facilities, designated as the exclusive "sources" to provide pets of unknown origin, temperament or health history to retail pet stores. That would place them in the stream of commerce, where they could have additional responsibilities and liabilities, as discussed in CityWatch. Rescued animals are often brought from out of state or other countries, or, in some cases, actually purchased at puppy-mill auctions by a rescuer.

A startling CBS4 undercover investigation by Mark Ackerman and Brian Maass which aired on November 13, revealed that, while many animal-rights activists are trying to shut down puppy mills, some actually purchase dogs at puppy mill auctions.

Investigators found that, although a section of Douglas County Canine Rescue's website warns people about dogs from puppy mills, in April, members of the group traveled to a puppy mill auction in Missouri and purchased 24 dogs, about half of which were puppies. The group then adopted the dogs out to families in Colorado.

A cofounder of the group said they wanted to make a difference in the lives of the dogs. It was stated that other rescue groups also purchase these animals.

However, a former volunteer told CBS4, "I won’t support a rescue that is going to a mill auction. They chose to go to a mill auction and purchased dogs there and re-homed them for extravagant prices."

Mayor Goodman wisely assessed that a problem cannot be solved merely by passing a symbolic law and ignoring the consequences.

Lawmakers apparently failed to ask for statistics or even look at local news reports to determine whether Southern California's puppy mill bans have had any reported empirical impact over the five years since Koretz pushed through the 2012 Los Angeles city ban.

From news reports SoCal bans have not deterred puppy mills, while predicting an impact on a multi-billion dollar industry that has adapted and, possibly prospered from cutting out the middleman (pet shops which were highly regulated under the Lockyer-Polanco-Farr Pet Protection Act) and merely selling directly to the public  or through brokers.

SIGNS OF THE TIMES - SAFER THAN PET SHOPS?

--Wikihow.com posts, How to Buy a Puppy Online Safely: 15 Steps (with Pictures)

--Some shelters are now urging potential puppy purchasers to buy from local breeders and go to the home to "see the parents." However, this may not always be a safe arrangement, since most sellers advise buyers to bring cash.

--Internet Pet and Animal Transportation Association lists the latest pet scams and purportedly instructs on how to buy safely on line.

The local breeding industry and hoarding, appears to be flourishing in Southern California. And, that could quickly increase in Los Angeles under Councilman Paul Koretz' newest proposal to circumvent traditional animal limits imposed by zoning laws and get more dogs (mainly pit bulls) and cats out of LA City's overcrowded shelters and into backyards.

CF 17-1237, Kennel / Delete Definition) in would remove authority of Zoning and Code Enforcement over kennels in the LA Municipal Code and, along with the exemptions of the "new-model" retail/rescue pet shops, could permit an unlimited number of surplus impounded pets and BREEDERS in residential, as well as, commercial zones citywide.

In Los Angeles, the GM of Animal Services issues breeding permits, which further validates backyard breeding in residential communities, and which would also benefit from Koretz' effort to remove zoning codes from the Planning Department and place all decisions on animal limits under Animal Services.

There is no notice given to breeders to obtain a City tax permit. Backyard breeding is not subject to any oversight, inspection or health check, other than as a result of complaints. The number of puppies allowed per property is unlimited up to four months of age.

On July 20, 2016, the LA Times reported that eleven pit bulls were found dead and more than two dozen others were malnourished and in ill health in a house in La Sierra. Riverside County Animal Services discovered the tragic scene upon responding to a complaint about a stench coming from the neglected, trash-strewn property.

Of the 26 emaciated dogs still alive, some could not walk out of the home under their own power and had to be carried. It’s unclear how long the animals had been neglected. “Dogs don’t get that skinny overnight,” Welsh said, adding, "Some of the dogs were so badly decomposed, they could have died during the last heat wave."

The owner of the dogs may have been a “backyard breeder” who sold them without the proper permits and simply walked away from the property. “This is why we encourage people not to buy from someone selling from a parking lot or on Craigslist,” Welsh said.

On November 14, 2017, more than 70 bulldogs are looking for homes after they were rescued from a puppy mill operating in Orange County, California, reported KTLA.

The 78 dogs -- ranging in ages from 5 months to 10 years old -- found on the property were handed over to Wags Pet Adoption agency. The adoption agency warned that many of the animals have medical issues and will need significant veterinary care due to their past.

THERE IS NO SIMPLE ANSWER

Las Vegas made the right decision to not risk driving those who want purebred puppies to purchase on-line or increase inhumane local backyard breeding. Pet shop "puppy mill" bans are a band-aid fix that can make purebred animals even more desirable to the public because of their inaccessibility and encourage criminal activities in sales.

If all stakeholders in the community work together -- with local pet shops encouraging shelter/rescue adoptions when it better meets the needs of perspective buyers and truly do not source their pets from "puppy mills" -- progressive, cooperative programs can be developed to address the main issues that contribute to local shelter overpopulation rather than merely repeating California's pet-shop ban mistakes.