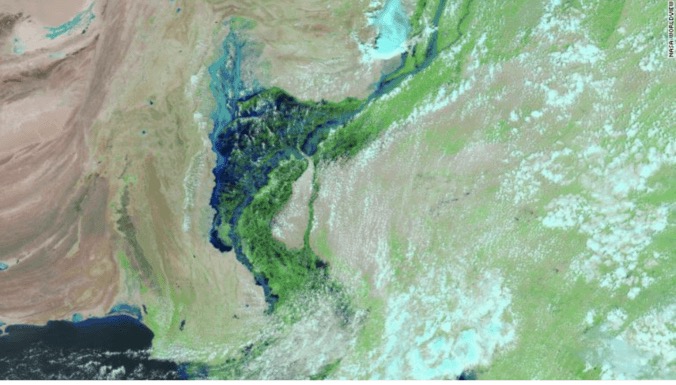 CLIMATE CHANGE - The scale of the destruction defies the imagination.

There are images and maps. But still you can’t quite wrap your mind around it. With reason. We’ve never seen anything like this. Never experienced it. Heard stories about it. There’s nothing to compare it to, not even the Biblical floods. We’ve gone beyond our own myths and legends.

I see you standing on the other side
I don’t know how the river got so wide
I loved you baby, way back when
And all the bridges are burning that we might have crossed
But I feel so close to everything that we lost
We’ll never, we’ll never have to lose it again

A third of an entire country–a big country, a country the size of Turkey and Venezuela–lies underwater, inundated by fierce floods from all directions.

Thousands of miles of roads have been wiped out. Hundreds of bridges washed away. Rail lines and airports submerged. Nothing getting in, nothing getting out. The entire nation brought to a standstill. A nation with nuclear weapons and an unstable government, bordered by a hostile regime which has demonstrated every inclination to take devious advantage of Pakistan’s devastated condition.

At least 220,000 houses were destroyed (imagine all of the houses in Spokane demolished), maybe a million more suffering some kind of damage, many beyond repair. At least 33 million people–more than the population of Texas and Oklahoma combined–at least temporarily displaced by the storms that have ravaged Pakistan since late June.

At least 1,200 have died, 400 of them children. More are missing. More than 330,000 people (about the size of Cincinnati) are living in camps with no idea when they can return home, how they will get there or what they will return to.

One of the fastest warming bodies of water on the planet, the India Ocean is becoming a simmering cauldron, cooking up heat waves and super-monsoons. This year the heat–heat almost beyond the point of human survivability–came first, in two back-to-back waves in May and June. Then came the rains. Rains like few other regions on earth have ever experienced. Rains that swelled the ancient Indus River over its banks and beyond its floodplains, creating a giant lake 100 kilometers wide almost overnight, which remains visible from space. A lake which can’t be drained, because there’s no place to pump the water to.

The rains that drenched Sindh were 784% above the average for August. The rains that flooded Balochistan were 500% above normal. As much as 40 inches more than normal. Numbers so high they don’t really have a meaning.

One searches for a precedent and finds nothing even remotely close. This is now the precedent. This is the new benchmark. We’re told we must adapt. Adapt to what? Cataclysm? How?

But the floods of August weren’t just driven by extreme rains, they were also charged with runoff of from collapsing glaciers in the Karakoram, Himalaya, Hindu Kush and Pamir Mountains, producing torrents of water crashing down from 20,000-foot peaks. Pakistan has more than 7,000 alpine glaciers, more than any place outside of the polar regions. And this glaciers have been melting 10-times faster than their historic average over the last two centuries.

Pakistan, a country responsible for less than 1% of global carbon emissions, now faces the 8th highest climate risk in the world. But it’s coming for all of us, eventually, regardless of the level of culpability. There’s no place to hide.

Ecological time is moving very fast now, so fast that we risk losing our bearings as a species, losing our connections to the landscape of the past, the very terrain that defined our existence, our ways of living, our sense of who and where we are. What were once fields are now lakes, what were once glaciers now cascades.

And yet the floods of Pakistan are a mere prelude, an overture for the future that awaits us. There’s no going back now, no bridge fuel to the past, no carbon capture time machine, or nuclear techno-fix wormhole out of our predicament. At this terminal point, such fantasies are only a measure of our failure to confront how we got to where we are.

(Jeffrey St. Clair is editor of CounterPunch. His most recent books are Bernie and the Sandernistas: Field Notes From a Failed Revolution and The Big Heat: Earth on the Brink (with Joshua Frank) He can be reached at: [email protected] or on Twitter @JeffreyStClair3.)