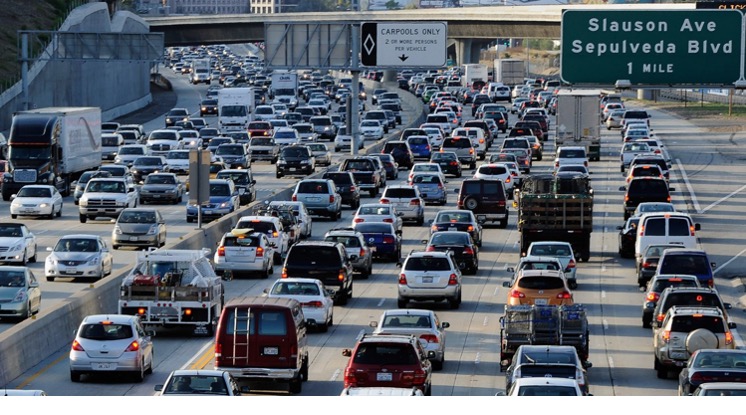 CLIMATE WATCH - Global Warming is no longer a thought exercise or academic paper trying to predict its existence, it is here, now, with burning temperatures in Los Angeles, and horrendous flooding in some places of the world.

The American West is in an extremely severe drought. California had the driest winter in 100 years.

This drought is the driest 22 year period in the Western U.S. in 1,200 years, made worse by global warming.

Ways to combat global warming from vehicle exhaust are available. One is to drive less by taking mass transit: riding buses and trains. Vehicle owners and drivers to leave the vehicle parked, the motor turned off, and instead ride transit.

I have been a regular transit rider since 1993 to reduce my carbon footprint. At this time I do not own a ZEV, but my riding buses and trains reduces my carbon footprint, and decreases the traffic gridlock by taking one vehicle off the road.

Another is to switch vehicles from those which emit global warming carbon gasses to ones which produce little, or no tailpipe emissions.

Both of these are done one vehicle at a time.

To try to combat global warming from vehicles, the California Air Resources Board, CARB, has mandated that automakers will have to gradually change the fleet of new vehicles to zero-emission vehicles-ZEV. Beginning with 35% of 2026 models sold as ZEVs , increasing to 68% in 2030 and 100% for 2035 models. As of this year, about 16% of all new car sales in California are zero-emission vehicles.

The theory of the CARB mandates is these ZEVs will replace the selling of vehicles with internal combustion engine vehicles-ICE, burning gasoline from refined oil. Currently the two most probable ZEV vehicle replacements are electric, and fuel cell vehicles powered by hydrogen, with electric vehicles selling more.

This is a positive beginning, but more needs to be done.

With 16% of new vehicles sold in California ZEV, the other 84% are gas burning ICE vehicles. That 84% range from those less polluting with high miles-per-gallon, MPG, to those more polluting large cars, muscle cars, trucks and SUVs with low MPG, all emitting carbon gases from burning gasoline, all contributing to global warming.

In 2035, and God willing we reach that year, in the CARB mandate, used ICE vehicles will still be legal to own, and sell. The only ICE vehicle permitted for new sales will be plug-in hybrid vehicles which have electric and internal combustion motors.

The switch to eventually changing the vehicle fleet to ZEV is critical. According to the Environmental Protection Agency, EPA, in 2020, transportation accounted for 27% of greenhouse gases, the largest source.

Critical to this change is the speed of the switch, and even this dramatic action from CARB may not be sufficient to slow the increasing climate catastrophe. And this requirement of new ZEV vehicles by 2035 is only for California.

California’s MPG requirements have always been stricter than the EPA’s. Because of the state’s large population and huge vehicle market, and overall economic pull, some, but not all, other states have adopted California’s emission controls for their own, and they could also follow suit here with the selling of only ZEVs by 2035.

The replacing of the fleet of ICE vehicles with ZEVs as mandated by CARB must be done, and with the hope it will be enough.

What does not seem to be in the CARB equations of switching from ICE vehicles to ZEVs is looking at the transactions of the exchange of vehicles in game theory. The CARB mandates could be a zero-sum game.

What Is Game Theory?

Game theory is a theoretical field of study in the social sciences that applies a mathematical model to predict the likely outcomes of a particular scenario. It is often used by people in political science, business, or poker to predict potential outcomes for scenarios in their fields. Game theory simulates a series of real-world, strategic situations through sequential games to predict decision-making processes. The dominant strategy is often for a player to make the choice that benefits them the most, though the best response is usually to cooperate to ensure the most advantageous, symmetric outcome for all players.

Game-theoretic mathematician John von Neumann helped formulate the idea of parties finding equilibrium through a series of two-person, zero-sum games. Along with Oskar Morgenstern, von Neumann wrote a book titled “Theory of Games and Economic Behavior” (1944), which is the foundational text of the field. John Nash also had a hand in developing the use of game theory through the Nash Equilibrium, which addresses non-cooperative games involving strategic interactions between players (two or more). Game theorists use the term "zero-sum game" to describe games where one player's gain is the other player's loss.

Zero-sum games occur whenever the aggregate gain between winners and losers totals zero.

Using the second example of selling damaged goods, the CARB mandate looks like it could be a zero-sum game because the overall loser is the planet Earth made warmer through vehicle exhaust carbon gasses.

At the most basic level, the two players:

The ICE vehicle owner trading in (selling through a down payment) their used vehicle, “damaged goods.”

In this complex transaction the buyer of the “damaged goods” ICE vehicle is also the seller of the ZEV vehicle, most likely a car dealership.

Raise the level to an existential one, and the players become:

The unspoiled planet Earth, with we humans living on it, and indeed all animals on land, in the water and in the air, great and small. The bounty of the Earth is “sold” to we humans and living creatures. What we humans create through our intelligence and industry are methods and items which are “damaged goods” to the Earth, its environment.

Back at the most basic level the transaction involves the dealership taking in an ICE vehicle in trade to sell a new ZEV vehicle, with money from the used ICE vehicle given as partial payment for the ZEV. But in this transaction the hoped-for attempt to reduce carbon gases from vehicle exhaust looks like a zero-sum game for the Earth and environment.

At a vehicle dealership, the ICE owner brings in their vehicle for a ZEV. The ICE is a used vehicle, and the ZEV to be purchased could be new or used. Once the transaction has taken place, the new owner of the ZEV may feel satisfied thinking they have released themselves from the burdens of releasing greenhouse houses as they drive. But this scenario is not fully true.

The new ZEV owner drives the vehicle off the car lot, and the dealer now is in possession of the trade-in ICE vehicle, which cannot stay on the lot because it is a negative financial asset. It must resold from the lot, or moved through the wide ranging system of moving used vehicles through the used car network.

Driving the ZEV is still a vehicle on the road, which becomes part of overall traffic and gridlock. Depending on when driven, such as commuter hours when roads are very crowded or gridlocked, and with 84% of the other vehicles on the road ICE vehicles, a great amount of vehicle emissions from the overall traffic of both ICE and ZEV vehicles, will occur. This is a zero-sum for the planet Earth.

The new ZEV owner may give the old ICE vehicle to a family member or someone, and that ICE vehicle will continue to be driven and emit global warming climate gases. A zero-sum game for the planet Earth.

The original used ICE vehicle, “damaged goods,” used by the previous owner to purchase a ZEV, has the potential to be driven for years by different owners, creating a long record of vehicle exhaust, adding to the climate catastrophe. Eventually that ICE vehicle will begin to break down. Older ICE vehicles become less efficient, with engines that pollute more, emitting greater and greater volumes of carbon gases. This is a zero-sum for the planet Earth.

Even if at the time of the transaction between the ICE vehicle and ZEV the ICE vehicle engine is removed and destroyed, thereby stopping that engine from creating future vehicle exhaust, the remaining parts of the ICE vehicle can be sold to keep other ICE vehicles on the road, which as they are driven will add more carbon gases to feed the gaping maw of global warming. On its journey to being driven longer, and that could be years, that “damaged goods” ICE vehicle will be emitting more and more global warming gases.

A continuing zero-sum game for the planet Earth.

To move the transaction between an ICE vehicle and ZEV to a positive sum for the planet Earth and environment, and for an immediate and lasting reduction of overall carbon gases from ICE vehicles, at the initial point of the transaction the ICE vehicle must be completely destroyed.

Of course this must be done in environmentally sensitive method with oils and fluids drained and recycled. Electronics removed and recycled. The vehicle’s plastics and metals recycled. Only then will the transaction, the game, move from zero-sum to positive-sum games for the planet Earth, its environment and inhabitants. Then, this would be a positive-sum game for the planet Earth and its inhabitants.

The crisis of global warming is now with us. Its ruthless demonstrations of its ruinous rampages on the planet is not a zero-sum game, but a very negative- sum game. A game which is increasing in its severity the longer the hard choices in transportation lifestyles are not done, such as reducing driving and riding buses and trains, and when a ZEV is purchased, the old ICE is completely destroyed at the time and point of the transaction.

We desperately need now a positive-sum game for the planet Earth.

(Matthew Hetz is a Los Angeles native. He is a transit rider and advocate, a composer, music instructor, and member and President and Executive Director of the Culver City Symphony Orchestra.)