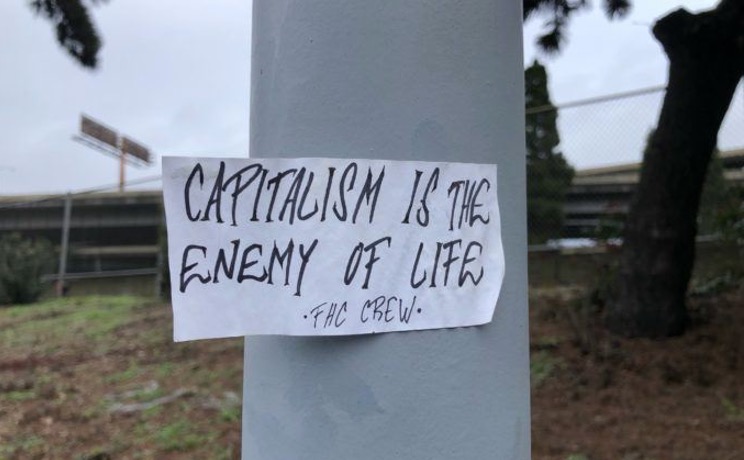 His main interests include volcano instability and lateral collapse, the nature and impact of global geophysical events and the effect of climate change on geological hazards.

Over the years he’s written a few books on the coming catastrophes we face as a result of ignoring the root causes of the climate catastrophe we face. His latest book is Hothouse Earth (2022). It’s grim and grizzles.

Bill McGuire: . . .Global heating and climate breakdown are with us now, rather than a vague ten thousand years down the line. As we confront the greatest threat in human history, there is absolutely no room for whimsy, so the book’s subtitle – an ‘inhabitant’s guide’ – signals that I am seeking, in all sincerity, to paint a picture – however grim – of what our future world is set to be like.

Hawkins: What’s causing the hothouse effect? In For Dummies language.

McGuire: Around 2.4 trillion tons of carbon dioxide has been released into the atmosphere in the last couple of centuries. This is acting as a blanket, keeping in heat that would otherwise head off into space. This global heating has pushed up the average temperature of our world by around 1.2°C as a result, although in places the rise is as great as 5°C. We are already seeing global heating translating into the collapse of our once stable climate, with an explosion of extreme weather – drought, heatwaves, floods, storms – that is causing widespread destruction and loss of life. As the planet continues to heat up, this is only going to get worse.

Hawkins: Can it be mitigated?

McGuire: A global average temperature rise of 1.5°C is widely regarded as a guardrail that separates us and our world from dangerous climate change. To keep this side of the guardrail, the world’s greenhouse gas emissions need to fall 45 percent by 2030 – just 90 months away. Although in theory, this is possible, in practice I am pretty certain that it isn’t. My conclusion is, then, that it is now practically impossible for us to dodge perilous, all-pervasive, climate breakdown that will affect everyone and insinuate itself into every aspect of our lives.

But this doesn’t mean that action is futile, it actually makes it more critical. Hothouse Earth is therefore a call to arms for us to act now to stop dangerous climate breakdown metamorphosing into a climate cataclysm. The near certainty of us shattering the 1.5°C guardrail also means that as well as doing everything we can to bring emissions down as fast as possible, we are also now going to have to work to adapt our infrastructure, lives and livelihoods to a world that is slated to be unrecognizable to the one our grandparents were born into.

Hawkins: In the foreword of Hothouse Earth you write:

“Some early post-COP26 modeling averred that, if pledges were all met and targets achieved, then we might be on track for ‘just’ a 1.9°C (3.4°F), or even 1.8°C (3.2°F), global average temperature rise. Firstly, however, this is a very big if indeed. Secondly, such predictions fly in the face of peer-reviewed research published pre-COP26, which argues that a rise of more than 2°C (3.6°F) is already ‘baked-in’ or, in plain language, certain.”

McGuire: There is some suggestion that, because of inertia in the climate system, the amount of carbon dioxide already emitted will ultimately translate to a global average temperature rise of 2°C or even a little more – a figure that is significantly above the 1.5°C threshold. Whether or not this proves to be the case, it raises the real possibility that our situation could well be even worse than we think.

Hawkins: In your chapter, Ground Zero you talk about the wigmaker Arkwright’s Legacy. Can you tell us more about that and how it relates to today’s climate issues?

McGuire: It would be disingenuous of me to suggest that the English businessman and entrepreneur, Sir Richard Arkwright, was single-handedly responsible for the dire straits we find ourselves in today, but his role is clearly pivotal. The opening in 1771 of the water-powered Cromford Mill on the banks of the River Derwent, here in Derbyshire, saw the beginning of mass production, using cheap, semi-skilled, labor to manufacture yarn. With the onset of steam power a few years later, mass production exploded across Britain, bringing about the industrial revolution, and the beginning of the large-scale plundering of our world. The day Arkwright opened his mill, the carbon dioxide concentration of the atmosphere was 280ppm (parts per million). Today it is 419ppm and still climbing fast.

Hawkins: Perhaps the greatest political failure in global history is the lack of teeth at the UN, a body that should be ready to override intra-governmental emergency decisions for the world’s benefit. Climate Change, for instance. No more nukes No more wars (the UN’s original mandate). Would you agree with this assessment? And how do we change the calculus.

McGuire: The UN has played an admirable role in highlighting the huge threat that global heating and climate breakdown present, in particular through giving birth to the IPCC (Intergovernmental Panel on Climate Change) and launching the COP (Conference of Parties) climate conferences. The problem, as ever with the UN, is that it doesn’t have teeth. It can act only with the agreement of its members, nearly all of whom have their own agendas. Indeed some, including the United States, would prefer the organization did not exist at all, or if it did only so far as it rubber stamped what the US wanted. The bottom line, however, is that the UN is all we have to push the climate breakdown agenda on the international stage, so we need to support it as much as we can and ensure that its work bears fruit.

Hawkins: Not too many lay people consider the sub-plots involved with Climate Change. Like what’s happening in Greenland. The one time it was brought up in recent years was by Trump in a self-farcical (if possible) reference to Denmark selling or putting up a Trump tower or something. But there’s more to Greenland, you say, than meets the greedy eye. Same for the Arctic meltdown. You’d think folks would be in grief mode, but instead they keenly observe how that melting will open up more oil fields — if we can fight off the Russians. You know?

McGuire: Yes, it is astonishing that some see climate breakdown as an opportunity, and fossil fuel corporations and some governments are poised to make the most of the melting of Arctic ice via exploring and exploiting any previously hidden oil, gas and mineral reserves that become accessible. This is predicated, however, on the fact that the world will operate tomorrow as it did yesterday. This is wrong.

In fact, by mid-century, it is not unlikely that global society and economy will be failing as climate breakdown bites ever harder. Rather than a new golden age of exploration, then, corporations of all shapes and sizes may well be struggling merely to survive, while national governments will have too many homegrown problems to look and act further afield.

“The problem is that Gaia is now sick and getting sicker. While taking ice ages and other natural climate shocks in its stride, widespread environmental damage and diversity loss has meant that Gaia is struggling to handle the vast quantities of carbon being pumped out by humankind’s activities at a rate unprecedented in Earth history. Lovelock himself is pessimistic that Gaia can get on top of the situation in the short term, and he has expressed the view that civilization will be hard-pressed to survive the ongoing breakdown of our climate.”

McGuire: A worst-case, or even end-game, scenario, envisages a cascade of feedback effects acting to drive irreversible, rapid heating, which could double the global average temperature of our world. Currently, this figure is around 15°C, so this would be hiked to 30°C. And this is the average. In places, temperatures could exceed 60°C, perhaps even 70°C. This would undoubtedly signal the end of civilization and have the potential – ultimately – to be an extinction level event for the human race, although it might be possible for small numbers to survive at the highest latitudes. I am still hopeful that this won’t happen, but it cannot be completely ruled out.

Hawkins: The late comic George Carlin addressed climate change with a “Fuck Us” attitude. Do you remember the rant?

He saw it through the eyes of Ecclesiastes: Earth abides, and the sun also rises.

McGuire: I have to say I am pretty gloomy. Despite unprecedented scenes on our screens this summer of wildfires obliterating entire streets in English villages, there are still those who refuse to accept that global heating is a thing. These people call themselves climate skeptics, but they are deniers pure and simple, and almost invariably of the libertarian hard right. Climate breakdown offends their worldview, as they see it as a threat to the free-market, capitalist, framework that they worship as a God. Indeed, it is a threat to capitalism, and capitalism will not tackle the climate emergency, not survive it. No system predicated on greed and short-term profit, rather than the greater good, will prevail against the storm that is coming, and – ultimately – the deniers will reap the whirlwind along with everyone else – which makes me marginally happier.

Hawkins: Tell us more about the Big Questions your book closes with.

McGuire: There is no bigger question than – how bad will things get? And, as I say in the book, the question could just as easily be, how long is a piece of string? The answer is nobody knows. Everything depends on what we do in the next 10 years or so. If we act now to make a serious dent in emissions – and the recent US climate bill is one bit of good news in this respect – then we could limit the global average temperature rise to around 2°C. The world will still see huge changes and society and economy will struggle to adapt, particularly as temperatures would take many decades, if not centuries to return to ‘normal’. If we do nothing, or not enough, then we could be headed for a climate apocalypse, with global average temperatures up by anywhere north of 4°C, and the progressive tearing apart of human civilization as a result.

There are increasing calls – supported by tech billionaires and fossil fuel corporations – to ‘engineer’ our way out of the climate emergency, by one means or another – the current favorite is to block out the Sun by mimicking a volcanic eruption – but there is a long list of reasons why this is a very bad idea. Not least because it tackles a symptom, not the cause, of global heating, and detracts from efforts to slash emissions. Messing with an already messed-up climate, many would also say, is not a very good idea, especially when such a scheme would inevitably trample on the legal and human rights of a large part of a global society.

Frankly, there is really only one question that we need to pose, and that is – are we going to do everything possible to make our world as safe as it can be for our children and their children? And the answer, surely, has to be yes.

(John Kendall Hawkins is an American ex-pat freelancer based in Australia.  He is a former reporter for The New Bedford Standard-Times and a writer for Counter Punch where this article was featured.)