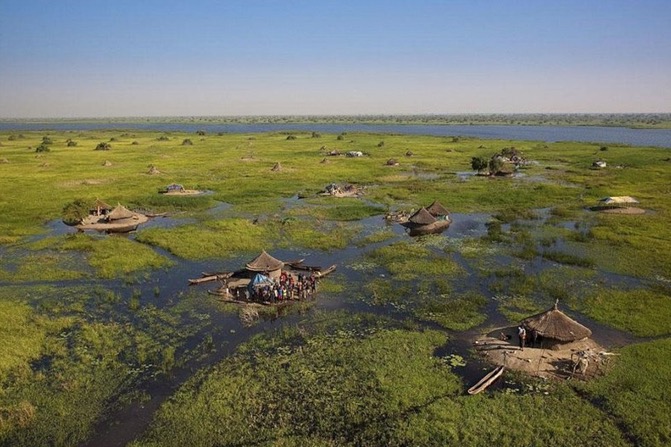 ECOSYSTEM - “With 35% loss globally since 1970, wetlands are our most threatened ecosystem, disappearing three times faster than forests.

Sudd is Africa’s largest freshwater wetland at roughly 3,500 square miles in an otherwise dry region of South Sudan. It’s under threat by a megaproject named Jonglei Canal that has the potential to devastate this ecological gem.

According to conservationists: “Even a partial loss of the Sudd would be an ecological disaster, desiccating the world’s second largest swamp and ending seasonal flooding of the surrounding grasslands, which comprise Africa’s largest intact area of savannah.” (Source: Will Nile Canal Project Dry Up Africa’s Largest Wetland? Grist, July 8, 2022)

Egypt has Sudd’s water in its sights, some of it or all of it, only time will tell. Its plans involve a 40-yr disrupted work-in-progress that is now moving ahead once again, diverting water from the Sudd watershed to Egypt.

Completion of a 240-mile canal will divert White Nile River flow directly to Egypt. This risks draining Sudd to levels that’ll negatively impact the ecosystem forever. But, nobody on the Egyptian side will even hint of such possibilities. The White Nile is one of two main tributaries of the Nile. It begins at Lake Victoria and flows thru Uganda and South Sudan, where it feeds water to Sudd’s remarkable pristine ecosystem, one of the world’s finest.

Wetlands are the principal feeder system for replenishment of the world’s aquifers. According to NASA one-third of the world’s largest aquifers are stressed in large measure because of loss of wetlands.

Cementing over, draining, diverting, or plowing under the world’s wetlands destroys the kidneys of the planet and a whole lot more. The path of destruction is already at critical levels.

“In just over 100 years we have managed to destroy 50 percent of the world’s wetlands… It is a startling figure.” (Source: Achim Steiner, executive director, UN Environment Programme, Hyderabad UN Conference)

“Wetlands are critical to human and planet life. Directly or indirectly, they provide almost the entire world’s freshwater. More than one billion people depend on them for a living and they are among the most biodiverse ecosystems. Up to 40% of the world’s species live and breed in wetlands, although now more than 25% of all wetlands plants and animals are at risk of extinction.” (Source: Wetlands Disappearing Three Times Faster Than Forests, United Nations Climate Change, October 2018)

One sentence from above says it all: Directly or indirectly, they (wetlands) provide almost the entire world’s freshwater.  In a world riddled with unprecedented bouts of severe drought, it takes on new significance.

As for completion of the work-in-progress canal, South Sudan’s environmental ministry has different ideas than most others in its administration. The ministry will not support “completion of the canal because of the ecosystem services that Sudd provides to our nation, the region and the world.” (Source: Will a Nile Canal Project Dry Up Africa’s Largest Wetland? YaleEnvironment 360, June 28, 2022)

What Will be Lost?

Ecologists claim the magnificent Sudd is under threat of turning into desert. Sudd is home to thousands of crocodiles, hippos, elephants, zebras, and the great majority of the world’s shoebill storks. It serves as one of the world’s mightiest mammal migration pathways, including 1.3 million antelope that cross through the ecosystem’s 100s of miles of rich grasslands to Gambella, Ethiopia. Ecologists fear that much of this will be lost. (Grist, July 8th)

Furthermore, hydrologist claim the project will reduce rainfall for farms and the rainforests across South Sudan as well as in neighboring countries.

British colonial engineers first proposed the canal in 1904. It was 2/3rds completed in the 1980s but abandoned because of a raging civil war. Rebels kidnapped the operators of the canal. They saw the canal as water theft by Egypt, depriving Sudd’s nomadic Dinka, Nuer, and Shilluk of fisheries and seasonal flooding of pastures for livestock. A 22-year civil war ensued.

“The abandoned site of the half-completed Jonglei Canal is one of the strangest scenes in Africa. A dry excavation 250 feet wide and up to 25 feet deep, extends across near-desert east of the Sudd for 160 miles, ending at the Bucketwheel, a 2,300-ton laser-guided digging machine as tall as a five-story building. The machine was brought there in 1978 by a French construction company, and for six years its 12 giant rotating buckets steadily excavated the canal.” (Grist)

In February 2022, South Sudan’s VP for Infrastructure Taban Deng Gai became the first minister to publicly call for the canal to be completed: “For our land not to be submerged by flood, let’s allow this water to flow to those who need it in Egypt,” Ibid.

Clearly, Egypt stands to gain the most, and it’s likely the only true beneficiary of completion of the canal.

However, an incipient coalition of environmentalists, concerned members of the Sudan National Legislature, academics, and NGO officials are pushing back with an energetic “Save the Sudd” campaign. Accordingly, John Aker, the vice chancellor of the University of Juba claims: The canal “has the potential of draining and destroying the Sudd’s ecosystem, with dire consequences on the Sudd region’s biodiversity, livelihood, culture, and hydrological cycle,” Ibid.

Academic Jacob Lupai claims: “South Sudan did not fight two costly and devastating wars… just to be at the receiving end of predatory outsiders’ imposed projects and to allow its precious natural resources to be plundered,” Ibid.

Supporters of the canal project claim it will not entirely dry up Sudd, merely shrink it. But, by how much is uncertain… guesstimates run as low as 7% and up to 40% with some opponents claiming total devastation. According to conservationists, “even a partial loss of the Sudd would be an ecological disaster.” (Grist, July 8th)

Significant amounts of water evaporation from Sudd’s skies carry south via winds that consistently maintain moisture for the ecologically crucial Green Belt that spreads across most of southern South Sudan and including the Democratic Republic of Congo and Uganda. In that regard, according to a hydrological model at Delft University of Technology and the University of Juba’s John Alec: “A shrinking Sudd will eliminate all-year rains across the region.”

Additionally, four billion tons of carbon would be released from peat if and when a significant Sudd dry out occurs.

It’s truly one of a kind.