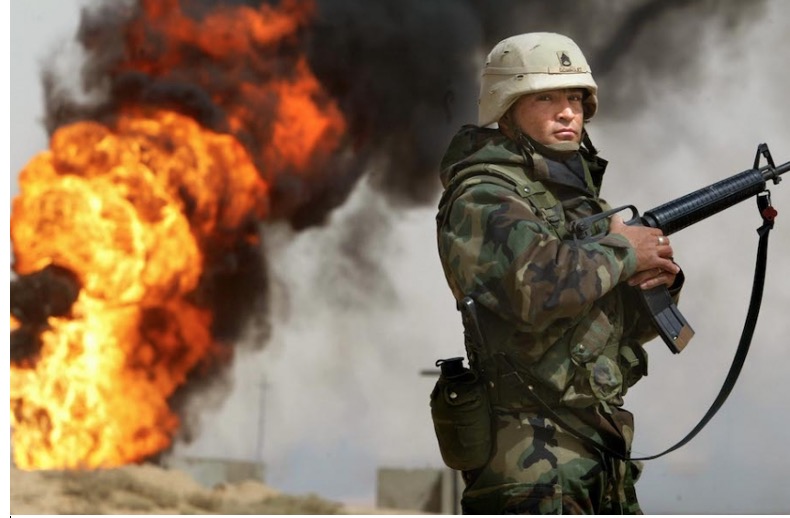 CLIMATE WATCH - America loves its military. It should, because it’s the most expensive defense force of all time.

All of which prompts a provocative question: What if the Marine Corps publishes a landmark study that claims recipients of the US government defense budget are collectively responsible for accelerating the danger of climate change to very dangerous levels, in fact, to unlivable levels?

The world’s militaries, intelligence agencies, foreign affairs strategies, and think tanks are unwittingly advancing the hyperthreat, which is an acceleration of climate and environmental change leading to Hothouse Earth. This startling information is explained in detail in an eye-opening analysis in which hyperthreat is the primary subject, to wit: Plan E: A Grand Strategy for the Twenty-first Century Era of Entangled Security and Hyperthreats by Elizabeth G. Boulton, PhD, Publisher - Journal of Advanced Military Studies, Vol. 13, No. 1, 2022.

The publications contain the following clause: The views expressed in this article are solely those of the author. They do not necessarily reflect the opinions of Marine Corps University, the U.S. Marine Corps, the Department of the Navy, or the U.S. government.

Publishing an article is ordinarily consistent with some level of tacit approval of its general tenor, especially when the article points an accusing finger at the publishing entities’ main source of existence. That’s tacit approval, in spades. Further to the point, by all appearances, the military seems to want Boulton’s thesis in the public domain as a wake up call and more likely as a brilliant strategy going forward.

The analyst/author Elizabeth G. Boulton, PhD (Australian National University) and MA of Climate Policy (University of Melbourne) is a former army major in the Australian Defence Force, serving in East Timor (1999) and Iraq (2004) and undertaking logistics work in Ghana, Nigeria, and Sudan, and a lead research officer at army headquarters.

All quotations within this article come from Boulton’s article or from the following synopsis of the article: Defence Agencies ‘Accelerating’ Risk of ‘Hothouse Earth’, US Military Study Warns, David Spratt, Climate Code Red, June 27, 2022.

A key finding in the landmark study, which applies war theory and military strategy to the dynamics of the climate and ecological crises, states that activities of military and intelligent agencies are: “Accelerating the likelihood of triggering a worst-case ‘Hothouse Earth’ scenario that would make the planet ‘unlivable for most species.”

That’s a very powerful statement that’s seldom found outside of spirited scientific analyses. Yet, it is lodged within the heartbeat of the US Marine Corps, a tacit endorsement that’s desperately needed for the political establishment to get the hint, hello out there, all is not well. For decades now Congress has handled climate change like a hot potato. That’s an amateurish way to approach an existential threat.

Moreover, and even more damning, the study argues that various agencies of government “have become the biggest danger to planetary security, in effect, working to accelerate the ‘hyperthreat’ of climate and environmental change.”

According to the study: “The hyperthreat impact is an unprecedented combination of rapid global warming and the unraveling of Earth’s ecological systems.” Of heightened concern, the study warns that the hyperthreat’s most dangerous course of action is provoking cascading tipping elements thereby accelerating a transition to: “Hothouse Earth state uninhabitable for most species.”

That statement has strong endorsements throughout the world of science, to wit: “In 2019, Ripple and colleagues (2020) warned of untold suffering and declared a climate emergency together with more than 11,000 scientist signatories from 153 countries. They presented graphs of planetary vital signs indicating very troubling trends, along with little progress by humanity to address climate change. On the basis of these data and scientists’ moral obligation to ‘clearly warn humanity of any catastrophic threat,’ they called for transformative change.” (Source: World Scientists’ Warning of a Climate Emergency 2021, BioScience, Oxford Academic, September 9, 2021)

The Boulton study places a timeline on taking action in order to prevent a worst case scenario: “Without concerted global action between 2022 and 2025, the most dangerous course of action is also the most likely course of action.”

Failure to address the danger within the 2022-25 timeline with proactive real time actual policies is explained in war terms: “The hyperthreat has ‘war-like destructive capabilities’ that make it hard to recognize the enormity of its destructive impacts or ‘who is responsible for its hostile actions.’ This is a phenomenon that humanity has never encountered before.”

The study identifies the difficult-to-grasp and stealthy nature of the hyperthreat by focusing on the main centre of gravity, which is its freedom of movement via invisibility and unknowability and human hesitancy to respond: “Human activity that fuels the hyperthreat is (1) often legal (2) has social license or (3) is understood as legitimate business or security activity; its contribution to slow violence is often obscured.”

But, what if that same $1.5T was spent on renewables and mitigation measures, e.g., retrofitting buildings to maximum energy efficiency or sustainable public transportation or enhancing carbon sinks?

As for coal, China is now building or planning to build in China and elsewhere in the world new coal plants amounting to 176 gigawatts of coal capacity, enough to power 123 million homes. (New Scientist, April 26, 2022)

“By seeking to protect the existing fossil fuel system, humanity’s security agencies are in effect working for the enemy.”  Yet, this is not intentional behavior, rather, it’s the effect of national security institutions entangled within the status quo. It’s normal operational behavior.

Further clarification by Boulton: “After the Second World War, military strategy traditionally involved securing resources and protecting supply chains – all considered crucial to post-war rebuilding and prosperity narratives. But it is now clear that this very system, which military and security strategies are designed to support, is the primary driver of global insecurity.”

In a twisted manner, the very resources regarded as good and critical for functioning of the global system now threaten all forms of planetary life. “By applying economic, diplomatic, military, and other tools of force and power to participate in the ‘race for what’s left’ of Earth’s resources, humanity is unwittingly aiding the hyperthreat.”

Dr. Boulton has elaborate plans to head off the biggest threat of all time, including a radical transformation of security paradigms. The next 8 years are pivotal. Defense resources need to develop a “whole of society approach, bringing into the fold numerous civilian capabilities to leverage Earth’s entire human population as an asset.”

The list of recommendations is beyond the scope of this article, but a couple of ideas follow herein:

For a full explanation, the link to Dr. Boulton’s article in the Journal of Advanced Military Studies, Marine Corps University Press go to: https://muse.jhu.edu/article/857233

One idea is establishment of a Global Climate Emergency Peace Treaty from 2022 to 2030 to allow nations to focus on the emergency hyper-response.

Another idea is to use international diplomacy to create a new, neutral, rules-based governing architecture for the world based on “ecological survival and safe Earth requirements… For this, we need to reimagine the role of great powers in the world, realigning geopolitical security with the overarching aim of containing the hyperthreat.”

In essence, Plan E or a Grand Strategy for the Twenty-first Century Era of Entangled Security and Hyperthreats utilizes a transdisciplinary approach to the idea of framing climate and environmental change as a new type of threat, a hyperthreat and when properly framed: “This approach contrasts to prior literature and longstanding geopolitical discourse that identify the risks of taking a securitization approach.” Instead, the author argues that it is now risker not to consider climate and environmental change within a mainstream geopolitical and nation-state security strategy.

Dr. Boulton’s detailed analysis, combined with a generous layout of how to tackle the issue, is perhaps one of the finest approaches extant, bringing together a well-reasoned all-in all-together approach of forces to defeat a monster by the same forces that bred and fed the monster at its inception.

The Boulton thesis is an extraordinarily important statement of facts about the invisibility and difficultly of identifying risks that, in point of fact, are normal operating behavior inbred into the socio-economic fabric of late stage capitalism which, according to the Boulton thesis, can be detoured and maybe even defeated but only by well-directed powerful universal action commencing this decade.

But, the window for achievement is narrow.

Postscript: The US Supreme Court has declared war against the EPA by hampering, effectively eliminating, public policy to control polluting fossil fuels. This dangerous ruling effectively pokes a stick in the eye of military security concerns about Hothouse Earth by its own military and tens of thousands of scientists throughout the world, as the US takes one more gigantic step backwards into an era known as the Wild West when rugged individualism ruled the domain with guns blazing.

Trump Kicking Off 2024 Run With Stops in Early-Voting States

Biden Picks Zients as His Next White House Chief of Staff