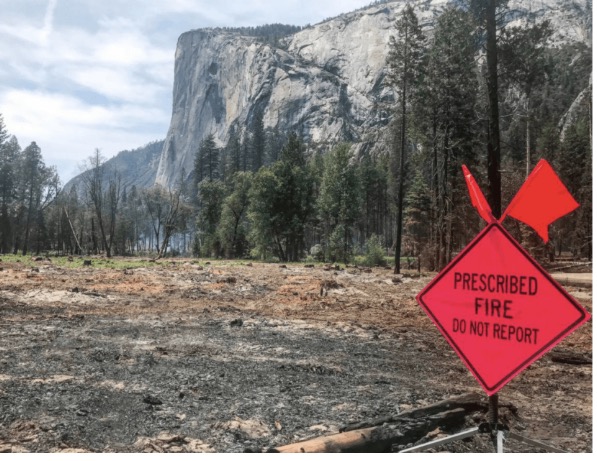 WILDFIRES - The Fresno Bee’s Editorial Board has gone on record opposing the lawsuit, by the John Muir Project of Earth Island Institute, against a huge commercial logging project in Yosemite National Park.

But the Editorial Board relies upon a scientifically discredited study by logging interests that blatantly manipulated data to promote a false and economically self-serving “overgrown forests” narrative.

While it may seem counter-intuitive to some people, the truth is that the strong weight of scientific evidence and opinion indicates that removing live and dead trees from forests does not stop or curb wildfires, and often increases overall fire severity. In fact, more than 200 of the nation’s top climate scientists and ecologists recently concluded the following:

We have watched as one large wildfire after another has swept through tens of thousands of acres where commercial thinning had previously occurred due to extreme fire weather driven by climate change. Removing trees can alter a forest’s microclimate, and can often increase fire intensity. In contrast, forests protected from logging, and those with high carbon biomass and carbon storage, more often burn at equal or lower intensities when fires do occur.

This was the case in the 380,000-acre Creek fire of 2020, where forests in which commercial thinning and post-fire logging were conducted under the guise of “fuel reduction” actually burned more severely, not less, similar to the results of another large California fire last year. Removing live, mature trees from forests, as Yosemite National Park is doing right now, reduces the cooling shade of the forest canopy, creating hotter, drier, and windier conditions that favor faster wildfire spread.

Nor does the best available science support the Editorial Board’s assumption that dead trees are a fire hazard. Shortly after trees die, dead needles and small twigs fall and quickly decay into soil, leaving little to carry flames. The biggest studies find no relationship between density of dead trees and wildfire spread or intensity. When dead trees fall, they soak up huge amounts of water like giant sponges and can hold 25 times more water per unit of volume than the surrounding soil, even during a drought. Moreover, contrary to the Editorial Board’s assumptions, stacks of scientific studies find that patches of fire-killed trees, called “snag forest habitat”, supports one of the richest and most biodiverse communities of native plants and wildlife in our forests.

Currently, instead of directly helping homeowners and communities become fire-safe, federal land management agencies such as the U.S. Forest Service, and now the National Parks Service, are heavily focusing on logging projects in remote forest wildlands distant from homes, using a series of deceptive euphemisms like “thinning”, “fuel breaks”, “restoration”, and “forest health.”

Their narrative is that these massive commercial logging projects will so dramatically reduce fire intensity and spread that wildfires can be easily suppressed before they reach communities. That is a dangerous falsehood — one that is leading to the devastation of one community after another.

We saw the abject failure of this approach in 2018, as the Camp Fire roared intensely through thousands of acres of “thinning” and post-fire logging, conducted as “fuel reduction,” before destroying over 14,000 homes and claiming 86 lives in Paradise and adjacent communities. We saw similar results last year with the Caldor Fire in Grizzly Flats, and the Dixie Fire in Greenville.

The approach promoted by The Bee’s Editorial Board would give us more of the same — degraded forests, faster-moving wildfires, and destroyed towns. The approach that the John Muir Project promotes would shift away from backcountry logging and direct resources and attention toward the two key things that science has proven will effectively protect communities from wildfires: home hardening and defensible space pruning within 100 feet around homes.

We need to start listening to independent scientists, not scientists funded by logging interests. The ecological integrity of our forests, and the safety of our communities depends on it.

(Chad Hanson is a research ecologist with the John Muir Project. He is a co-editor and co-author of “The Ecological Importance of Mixed-Severity Fires: Nature’s Phoenix” and the author of “Smokescreen.” This article was featured in CounterPunch.)