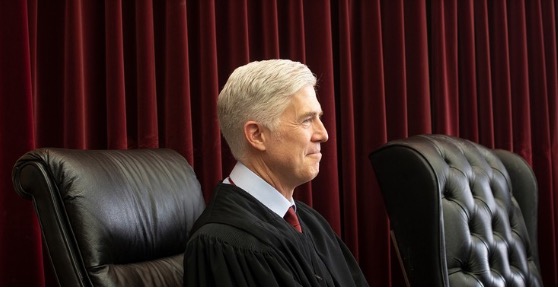 Longtime readers of my work and listeners to my program know that the Supreme Court has seized for itself extraordinary powers that the Framers of the Constitution never intended for it to have. There are summaries here and here, for example.

This is not an opinion unique to me or my book The Hidden History of the Supreme Court and the Betrayal of America: two Harvard Law professors just this week wrote an article for The Atlantic that lays out pretty much the same arguments.

And now it appears Republicans on the Court are about to use that ill-gotten power—on behalf of the fossil fuel industry—to cripple America's ability to meet the challenge of climate change.

It's a bizarre concept and just a fig-leaf to hide the fossil fuel industry's desire to end government regulation and kill subsidies of green energy. To get there, they want to turn regulatory agency rule-making upside-down.

Here's how environmental law is supposed to work (in super-simplified form):

This is how it works, a process that simply comports with common sense, as the Supreme Court ruled in 1984. It's been this way for a century or more.

Congress passes laws that empower regulatory agencies to solve problems, the agencies figure out how and put the rules into place, and the solutions get enforced by the agencies.

Now comes a group of rightwing Supreme Court justices including Neil Gorsuch, whose mother tried to destroy the EPA when she ran it (and had to resign in disgrace) during the Reagan administration.

In addition to Gorsuch, the Court also has Amy Coney Barrett whose father was a lawyer for Shell Oil for decades, and John Roberts, Samuel Alito, and Brett Kavanaugh who are all on the court in part because of support from a network funded by fossil fuel billionaires and their industry (among others).

The "novel" argument that a group of Republican states' Attorneys General are advancing, and Neil Gorsuch has already endorsed in a lower court ruling before he was placed on the Court, is breathtaking. It could end most protective government regulations in America.

They're arguing, essentially, that the EPA (and any other regulatory agency)  can't do all the steps listed above: instead, that detailed and time-consuming analysis of a problem, developing specific solutions, and writing specific rules has to be done, they say, by Congress itself.

In other words, Gorsuch says, Congress itself—not the EPA—must evaluate the science and then write the rules.

As if Congress had the time and staff. As if Congress was stocked with scientific experts. As if Republicans in the pockets of fossil fuel billionaires wouldn't block any congressional action even if it did.

Back in 1984 the Supreme Court concluded, in their Chevron U.S.A. v. Natural Resources Defense Council decision, that it only made sense that Congress would set goals and regulatory agencies, stocked chock-a-block with scientists and experts, would do the science and write the rules.

That doctrine is called "the Chevron deference." Courts should defer, SCOTUS said, to the regulatory agencies, since they're the ones with the expertise.

But Gorsuch has argued, essentially, that making rules—even the detailed scientific minutiae of rules—should be done by Congress instead of the EPA, and that agencies like the EPA should simply play the role of cops on the beat, enforcing those rules.

This would cripple virtually every regulatory agency in Washington, DC, from the EPA to the FCC to OSHA. Every rule made by any of them (and dozens of other agencies) could be thrown out under a direct court challenge, and, unless Congress specifically replaces those rules by passing new laws themselves, those rules will cease to exist.

Chaos hardly begins to define what could be the result. It's exactly what Steve Bannon said the Trump administration was planning to do: "Deconstruct the administrative state."

The United States (with 4 percent of the world's population) has produced more greenhouse gasses than any other nation and continues to be one of the planet's major emitters.

Blowing up the EPA's CO2 rules would guarantee the future profits of the fossil fuel industry—the group that partially bankrolled Gorsuch, Roberts, Barrett, Alito, and Kavanaugh's ascent to the Court—and also speed up the destruction of our atmosphere and the life on Earth it supports.

My bet is that if they're going to do this (the New York Times this week is speculating it's probable) in the West Virginia v EPA ruling that's expected any day, and that they'll drop the decision on the same day as their abortion or gun rulings, guaranteeing that most people won't hear a thing about it.

Keep an eye on this decision: it'll probably get no meaningful media coverage because it seems so bureaucratic and administrative (and may be buried in abortion or gun control news).

In truth, if it goes as is now expected, it will evoke the last lines of T.S. Eliot's poem The Hollow Men:

This is the dead land
This is cactus land
Here the stone images
Are raised, here they receive
The supplication of a dead man's hand
Under the twinkle of a fading star. …