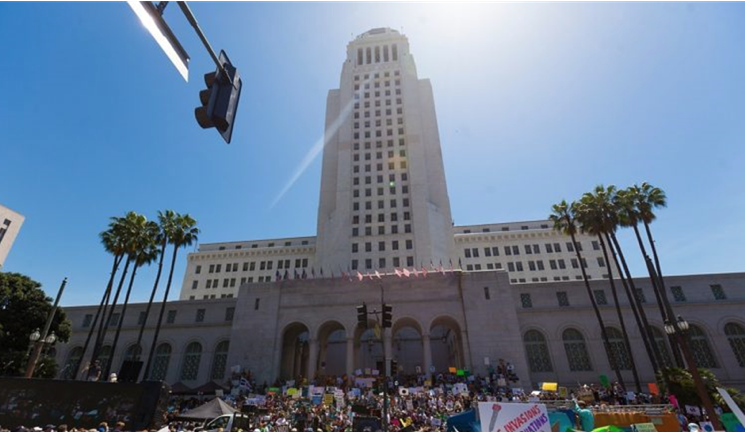 WHO’S LOOKING AFTER YOUR MONEY?--(This is the first in a series of articles on the history of the Budget Advocates.) If you have ever tried to get anything done through our city’s bureaucracy, such as fixing a pothole or trimming a tree, you know it can be a frustrating experience.

People who analyze organizational structures point out that as a governing body grows, the prime motivation of the people within is not to serve their constituents, but to maintain and expand their personal budgets and influence. This leads to greater inefficiencies unless the organization is streamlined and reformed.

A brief history of Los Angeles

Unlike New York, London, and Mexico City which grew outward, Los Angeles did not. The original City of Angels was centered on El Pueblo, founded by Mexican families from Sonoma in an area home to the Chumash and Tongva as a military outpost and to convert the indigenous people.

Separate towns subsequently established in the Los Angeles basin were built around health resorts, agriculture, manufacturing, filmmaking and the port, many of which had distinctly different cultures and ideas from the original sleepy pueblo.

The city we live in today is an amalgam of all of these and more, towns whose leaders had very different ideas about what a government should be and do.

The Los Angeles city government found the best way to compromise was to make backroom deals.It became notorious for corruption and cronyism, a problem the Angelenos have fought with greater and lesser success to this day. This has been further exacerbated by the wide variety of special interests ranging from real estate developers and bankers to oil companies and activists, often leading to the neglect of large immigrant communities and conflicts over racism, housing, transportation, economic injustice, policing and more.

City Hall’s increasingly tone-deaf approach to the concerns of huge parts of their populace, eventually led to the Valley threatening to secede from Los Angeles in the 1990s citing neglect, the unfair allocation of resources, and the lack of basic services.

Although Los Angeles voters soundly rejected the efforts of the Valley to form its own city on a 2002 ballot measure, there was still over 50% support among their residents.

For the city government to maintain credibility as representative of the entire city, the Mayor and City Hall realized that they had to take steps to allow all Angelenos and neighborhoods to have a voice.

After considerable debate, a new City Charter was approved by the voters which included the establishment of an innovative Neighborhood Council system under the new Department of Neighborhood Empowerment, with the mission statement:

To promote public participation in government and make government more responsive to local needs by creating, nurturing, and supporting a citywide system of grassroots, independent, and participatory neighborhood councils.

Today, cities across the United States and around the world send their experts to see how representative democracy works and take back what they learned to apply it in their hometowns.

But simply advising on proposed legislation is not enough. People need to be proactive and help shape the process to make this a better city. Or, as our mayor has said on numerous occasions, make Los Angeles the best run big city in the world.

One of the lynch pins of any government is how they get their money, from whom and how they spend it.

The Neighborhood Councils appointed people to meet in citywide group to answer those questions and speak up for the citizens of Los Angeles.

They are the Budget Advocates.

(The Budget Advocates are an elected, all volunteer, independent advisory body charged with making constructive recommendations to the Mayor and the City Council regarding the Budget, and to City Departments on ways to improve their operations, and with obtaining input, updating and educating all Angelenos on the City’s fiscal management.)