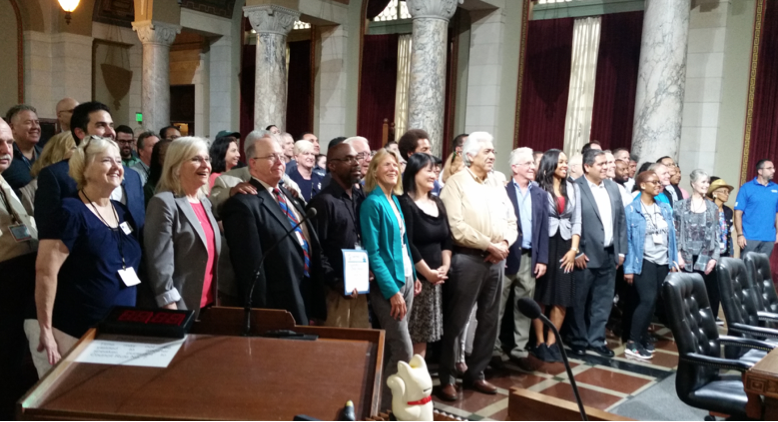 BUDGET ADVOCATES-On June 23, after a savory catered breakfast in the art-deco rotunda of City Hall,

Neighborhood Council (NC) colleagues and stakeholders convened at the John Ferraro Council Chamber to learn about the 2018-19 City Budget from City Officials and to listen to how the Budget Advocates were able to accomplish their tasks successfully during the 2017-2018 cycle.

Board of Neighborhood CommissionersPresident Joy Atkinsonwelcomed the audience with a plea, stressing the importance of NCs working together in a city as large as LA. She said that we have one thing in common: we make our communities better by helping our stakeholders learn and engage in civic participation. “Work together and don’t get bogged down with administrative details,” she concluded.

In recognition of the Budget Advocates’ inspirational work on behalf of the City, Grayce Liu, General Manager of the Department of Neighborhood Empowerment (DONE), acknowledged them individually with a Spirit Award.

Budget Advocates Co-Chair Jay Handalspoke next.He began bythanking Ms. Liu and Neighborhood Council Advocates John Darnell and Julien Antelin for their support of NCs in helping to organize this successful event. Handal emphasized that the budget increases and our revenues increase annually, yet City-projected expenses outrun revenue increases almost every time.“[When we’re] not getting the basic services that we’re paying for, there’s something wrong. There’s something wrong with how the monies are being managed,” he said.

Handal concluded by pointing out how great the impact of the Budget Advocates has been over the years. “In the years I’ve been a Budget Advocate, over 35% of City budget issues addressed have been complied with and another 30% or so are being worked on,” said Handal. (See the Budget Advocates White Paper for details.) Get involved, show up, speak up and make a difference,” he encouraged.

City Controller Ron Galperin spoke next. As Chief Auditor for the City, he issues reports about how to improve city services, and as City Controller, he ensures that every City department operates as efficiently as possible, and that they adhere to specific procedures before submitting invoices on behalf of the City.

In addition, Galperin created and oversees Checkbook LA, a line-by-line accounting of services purchased by the City of Los Angeles. “I’m the watchdog for the people’s money,” he said. The Controller also shared a link to Control Panel LA, a comprehensive source of data of all City expenditures and revenues that includes datasets on payroll, purchasing, audits and reports, the City budget, General Fund, Special Funds, and more. See it at: https://controllerdata.lacity.org.

A new ControlPanel feature is the Property Panel which has mapped the 8,975 city owned properties including offices, public buildings, parks, residential buildings, and even empty lots, etc. Search maps by address, Assessor’s Parcel Number, or City Council District at: http://www.lacontroller.org/propertypanel

Councilman Paul Krekorian then gave a briefoverview of the period since the last economic recession in 2008 to the present, during which we’ve created the largest general reserve in the history of the city. LA is now benefiting from the longest recovery this country has experienced. He finds that the city is monumentally in far better condition than it was seven years ago. Two-thirds of the money from the General Fund is spent on the Police and Fire Departments. The hardest decision currently is whether to increase the size of the Police Department or to increase funding for Vision Zero to keep people from getting killed.

Krekorian acknowledged that the NC movement has created an increase of civic participation. “Your [NC Member] role is so important because you’re speaking for people who don’t speak; the work that you do is not financially rewarding as it is spiritually,” he concluded.

Budget Advocate Vice Chair of Administration Barbara Ringuettethen presented a brief description of the workload undertaken by the 36 Budget Advocates over the course of a year. They meet twice a month, analyze the City Budget, raise concerns and make recommendations. As Budget Advocates visit the various City Departments they have many opportunities to influence City policy. “We collect concerns from our communities as put forth by NCs,” Ringuette said. Meanwhile, Budget Advocates continue to document data and information to discuss at their meetings.

Assistant City Administrative Officer (CAO)Ben Ceja spoke next. Ceja works with the Chief Legislative Analyst, reviews the City Budget, and collaborates with the Mayor’s Office and Councilmember Krekorian to address concerns. Property Taxes are the largest source of city revenue to the General Fund. Police funding is 52.3 % and Fire is 17.5% of the general fund expenditures. If police salaries increase, the hours for police overtime diminishes, Ceja said. Pensions take up 20% of the General Fund. Pending city policy decisions could affect projected revenues including those generated from the sale of Cannabis and the Transient Occupancy Tax related to Short-Term Rentals, he said.

The Mayor’s Deputy Chief of StaffMatt Szabo next explained the 10-year cycle of economic recessions. We are now in our ninth year of growth and need to fix our infrastructure before the next recession, Szabo said. For Budget Year 2018-19, the total General City Budget is $9.9 billion, showing growth in the general revenue. We’re investing in personnel by moderately increasing the workforce while adding to the reserve for when there’s a downturn in the economy, he said.

Last, Budget Advocate Co‐Chair Liz Amsden closed the plenary session and directed participants to the regional breakout sessions attended by Budget Representatives elected by each NC. Those attending the sessions had the opportunity to run for an open Budget Advocate seat. Congratulations to all those elected to serve as Budget Advocates.

(Connie Acosta is a board member of the Echo Park Neighborhood Council, a newly-elected Budget Advocate, and a member of the Los Angeles Press Club.)