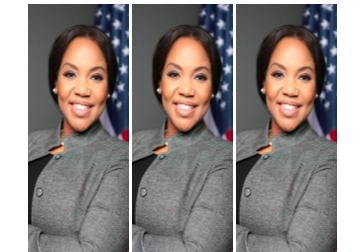 BUDGET ADVOCATES-Caring about your neighborhood means that you care about your community. Caring communities make great cities, and that’s why many become part of neighborhood councils as committee members, board members and stakeholders.

Those who are interested in helping the city become transparent with your tax dollars also volunteer their time as City Budget Advocates.For a few others,such a commitment isn’t enough, and they decide to run for office. Ron Galperin, LA City Controller is an exampleof this. He is the first Neighborhood Council member elected to city-wide office in Los Angeles.

Now we have Adrienne Nicole Edwards, a City Budget Advocate, who will run for the California U.S. Senate seat. At 29 years old, Adrienne is currently the youngest person running for U.S. Senate in the Nation and the only African American running for Senate in California. She is pitting herself against 20-year incumbent Dianne Feinstein who failed to get the California Democratic Party’s endorsement this election cycle, along with California Senate Majority leader Kevin De Leon who is also running.

BK: Why hasn’t being on the neighborhood council and a current budget advocate been enoughfor you and what have you learned in those roles that motivates you to run for Senate?

Adrienne: As a current OPNC neighborhood council member and Budget Advocate I feel like we do a lot for our community, but we are also limited and at times we are forced to be onlookers while things happen out of our scope of power.

This motivates me to run for US Senate! We can no longer afford to be passive observers. It’s time for us to do the right thing and take back our future. I have learned that it takes the people and consistency to make change happen regardless of who you are. The NC’s play a major role in their direct neighborhoods, I wish more California cities had a civic engagement program this large and diverse.

Adrienne: It’s either now or never, we are facing a crucial moment in the United States and we cannot allow hatred, division, or bigotry to tear us down. Trump has caused a lot of discourse and hatred to thrive more than ever in our lifetime. Its time for us to come together and unite as one despite our differences by using our diversity to unite us. Standing together and united in one voice for the benefit of us all! We can all gain something we need by working together. We can make a transition as a nation. We are better than hatred happening now, we are bigger than this and I am running to change the tempo by spreading Hope and Unity!

Neighborhood councils, city budget advocates and stakeholders all care about their communities. The experience gained from volunteering so many hours provides insight into how things work in our city.

Will you give your time and talent on behalf of the needs of your community? As you volunteer and learn, you too may discover it isn’t enough and decide to run for city or state office. But the first step is to join your local neighborhood council...Ron Galperin and Adrienne Nicole Edwards did.

(Brigette Kidd is a Neighborhood Council Budget Advocate from Region 9 who chairs the Cannabis Committee.) Edited for CityWatch by Linda Abrams.