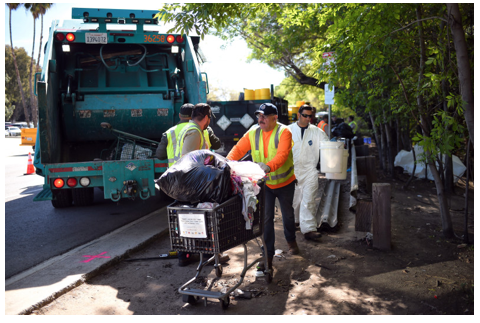 BUDGET ADVOCATES-The Los Angeles Sanitation Department (LA San) operates with an annual revenue budget of over $1.1 billion, only about 2 percent of that coming from the City’s General Fund. Most of its funding comes from fees and special funds.

In addition to handling waste collection, LA San oversees crucial environmental and infrastructure programs, including the City’s Clean Water program, the Solid Resources program, and the Watershed Protection program. Some of these programs are mandated by state or federal government but others were innovated by La San to place department at the cutting edge of waste management.

This year, LA San will be entering into a public/private partnership with RecycLA to extend recycling and efficient waste handling to the City’s commercial and industrial sector, as well as to multi-family homes.

According to the Budget Advocates, the RecylLA rollout has been less than successful. At an October meeting, committee members Liz Amsden, Jay Handal, Jack Humphreville, and Joanne-Yvanek-Garb shared their recommendations to improve this partnership.

Here are some of the committee’s recommendations:

Noting the issues experienced during the rollout of RecycLA, the committee also recommends that proper planning and advance consultation with the Neighborhood Councils, as well as other stakeholders, is essential to ensure smooth execution and to avoid the backlash that arises during transitions.

Technology has changed the way customers pay bills and receive communications. Attaching notices to paper bills or even online bills is not effective as outreach. LA San needs to develop better outreach, such as screen notices before clicking through to the website, priority recorded messages, bright notices on outside of envelopes, and additional solutions that might be developed by LA San.

The City’s stakeholders play a big role in this initiative. Our city belongs to its residents, who need to commit to improving consistent recycling at home, at work, and on the road, educating themselves and their children on the water-wise and zero waste approaches for a sustainable future.

These efforts include avoiding over-packaged and environmentally unfriendly products to ensure compliance up and down the supply chain, avoiding washing or blowing debris into the street and down sewers, and working in neighborhoods to prepare for emergencies.

In a rapidly changing world, especially one where sustainability, resilience, the remediation of air and water pollution and rectifying climate change have become imperatives, LA San’s progressive plans regarding the City’s water and garbage should be included in their budget requests moving forward.

This is why the implementation and expansion of LA San’s IT systems is so important: accurate data is needed to inform decision-making and limit the high costs of emergency reaction to equipment failures and other system problems that for the most part should be preventable with proper maintenance and upgrades.

Some ideas discussed with LA San this year as well as in the past have included: targeted and expanded recycling, exceeding zero solid waste goals, expedited progress on tertiary water use, further improvement of storm water reclamation, development of secondary water sources in the event of cross contamination due to a natural disaster or terrorist act, improved desalination technology, repurposing of our reservoirs, and efficiencies at individual, business and City levels.

Many of the committee’s recommendations are not one-year projects and would benefit from having a minimum three- or five-year budget projection along with the Department’s current needs. LA San already does this to a certain extent but budget allocations from the City do not shadow that. To be effective, the City also needs to take a longer-term perspective of its and all the Departments budgeting needs including developing effective ways to track expenses and projections over the long term.

Capital investments will benefit several generations of Angelenos and the low cost of financing today through debt-financing is appropriate to move forward on an expedited basis on needed capital improvements. Such requests must indicate not only costs to run pilot programs and implement them on a City-wide basis but also the projected savings, both direct and indirect, to offset the initial costs.

Homelessness is a primary component of the funding LA San receives from the City’s General Fund (albeit only 2% of LA San’s overall budget), due to the ever-increasing numbers of people living on the street and the lack of adequate services for the chronically homeless. Despite Measures H and HHH, current rehousing and support is inadequate.

Last year the Department requested $17.6 million, up from $10 million the previous year, for these projected clean-up efforts. The City funded a 5th Clean Streets service team but, with increasing homeless numbers and the construction of enough supportive housing still years in the future, the City must get ahead of the curve and double the number of these teams, expanding services to encampments that include drug-user mitigation (collection of sharps and other hazardous materials), as well as networking with the County on these and future issues related to homelessness and gentrification-driven population migration.

Finally, the Budget Advocates are addressing the need for a permanent and intelligently-funded City and County team to develop a more effective way to direct inquiries and concerns to appropriate departments, as well as to address shared issues such as homelessness, stormwater upgrades, green infrastructure, and other long term proactive goals. Both jurisdictions must work together on reducing the Southland’s reliance on imported water and continue to build sustainability and resilience in the face of climate change, economic swings, and potential natural and manmade disasters.

NOT asking for what is necessary for the City’s continued health for “political reasons” is the epitome of dysfunction. LA San should insist, especially when it comes to infrastructure concerns and long-term programs, on moving off the year-to-year line-item budgeting that continues to fail the City. It must develop a more suitable, effective and sustainable approach to budgeting that embraces a City moving into the future.

The Budget Advocates encourage LA San to work to obtain necessary funding to address the department’s responsibilities regarding the homeless crisis, which includes coordinating with appropriate departments and the county. LA San should seek innovative approaches from around the world to incorporate into long-term planning, to progress expediently on these projects applicable to Los Angeles.

LA San must present best case/worst case scenarios to the Budget and Finance Committee so that the committee can devise the necessary strategies to ensure the City’s successful growth and survival in the face of challenges such as population expansion, drought, and climate change.