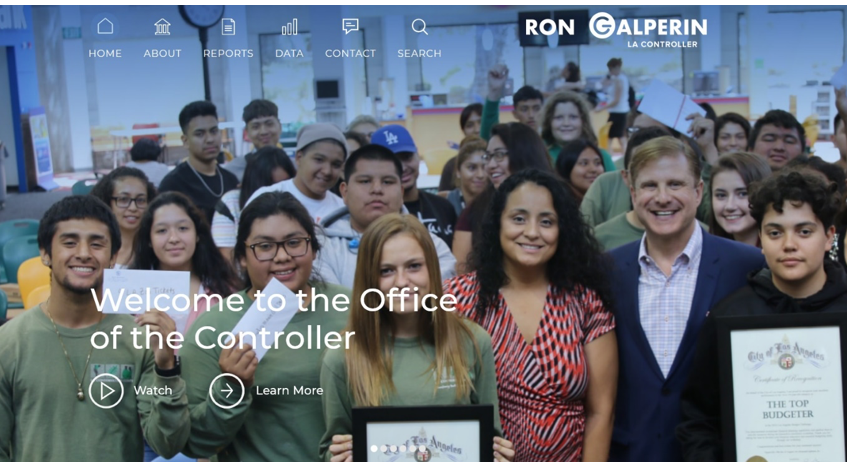 NEIGHBORHOOD POLITICS-$10.6 billion is a lot of money but that’s the amount the City of Los Angeles will be spending this year.

Do opportunities exist for misuse or redirection of funds that are supposed to be used for services?

That is where the City Controller comes in. We elect him or her every four years to be the watchdog on all things fiscal.

Ron Galperin, the current Controller, is the paymaster, auditor and chief accounting officer for the City of Los Angeles, overseeing a team of more than 160 employees who are responsible for keeping tabs of how the city spends our money.

As someone who came out of the Neighborhood Council system, Galperin has been far more responsive on transparency and accountability issues than his predecessors and deserves credit for creating a dashboard that makes a wealth of financial data and city metrics available to all online.

This dashboard can be overwhelming at times due to the volume and variety of information. It may be time for an update, simplifying access and improving search features but it gives people access to an amazing amount of information and forms the basis for oversight of city spending.

Fiscal audits are one of the primary responsibilities of the Office of the Controller. While financial costs are a key element, the Controller also has the authority to conduct performance audits of City departments, examining their effectiveness. More than just using money well, it is important for departments to use their budgets wisely.

Performance audits assess productivity, but they take time and can be expensive. The department needs to develop ways to quickly determine what areas would benefit from such in-depth audits.

Developing ways to execute targeted real-time reviews of spending should be prioritized for the benefit to departments and the city.

The funding of additional waste, fraud and abuse positions would increase the effectiveness of the Controller’s office, saving the City more than the cost to hire and train them.

There is a definite disconnect between people’s perception that the city needs temporary housing now along with appropriate services. For tens of thousands, not the tens or a few hundred that appear in the news headlines.

Permanent housing that may not be available for five or six years may suck up funds but will not make a dent in the problem today.

The Controller released a report in October on the effectiveness of the city’s response to the homeless crisis as required under Proposition HHH and, given that most of the funds have been allocated, the results to date have not been particularly encouraging, what with overlapping and often conflicting jurisdictions. Not to mention that a recent audit found that 40% of overall outlays – fees for consultants, attorneys and lobbyists – do not provide any services to the homeless.

Furthermore, although the homelessness initiative is supposed to be coordinated from within the Mayor’s office to ensure the departments work together, there is no uniform system for each department to measure its expenditures. There is no easy way to track the additional costs for the maintenance of Parks and Recreation facilities or what percentage of Police or Fire services are being used in support of people experiencing homelessness, and no way to assess the quality of life for the men and women and children on the street.

Effective compilation of data on funds spent on homelessness programs by department, actual and as a percentage, will give everyone concerned a clearer view of what is needed and may be a way to force needed change.

Another issue that Galperin has been instrumental in bringing to the attention of Angelenos, is the amount of money sitting idle in Special Funds accounts. Some of this deserves to stay, sequestered from the city’s General Fund until needed. However, some was earmarked for projects long gone or no longer applicable.

The City Council should require automatic sunset provisions on any new Special Fund, and the Controller’s office needs to review and wind up existing Funds which are no longer needed and release the monies for more urgent uses.

The city is facing significant expenses due to unbudgeted salary increases, increased pension contributions, and higher maintenance and repair expenditures for our crumbling infrastructure, as well as the added and accelerating costs of the Olympics, Metro expansion, homelessness and the very necessary but expensive sustainability and resilience programs.

A trickier issue has to do with personnel and to what extent the Controller’s office can have an effect.

First is that all departments are suffering due to the existing civil service exam system which requires competitive exams and standardized job classifications. This dates from when patronage was superseded by merit-based hiring for government jobs. The intent is still valid, but the current procedure is cumbersome.

In the 21st century, the system must evolve to meet each department’s need to fill positions on a timely basis, including remotely testing qualified applicants from cities in other parts of the country.

A number of departments lose potential hires due to these delays, others lose personnel they have hired and trained to other jurisdictions, including the city’s proprietary agencies (the Department of Water and Power, the Harbor, and Los Angeles World Airports) because they don’t have the flexibility to offer competitive salaries and benefits.

The world is changing at a faster and faster rate. So much remotely these days that hiring processes must evolve to meet today’s needs.

To enhance the Controller’s dual function of accountability and transparency, the office should update the dashboard, and ensure that all the concerns they have about the city’s expenditures are published in the mainstream press in a timely manner. This would give Angelenos the tools to challenge actions by Councilmembers that are not in the people’s best interest.

Bringing back the Inspector General position to one of authority and supervision would allow the Controller to act on recommendations to recoup monies and cut costs.

The Controller should use the power of his office to strongly advocate for reform of the city’s pension plans to ensure they are fully funded and no longer contribute to the structural deficit.

But, most importantly, in this day of rampant fiscal manipulation with too many opportunities for elected officials to hide where our tax dollars are actually going, people need to vote wisely. Los Angeles needs a strong and trustworthy City Controller.