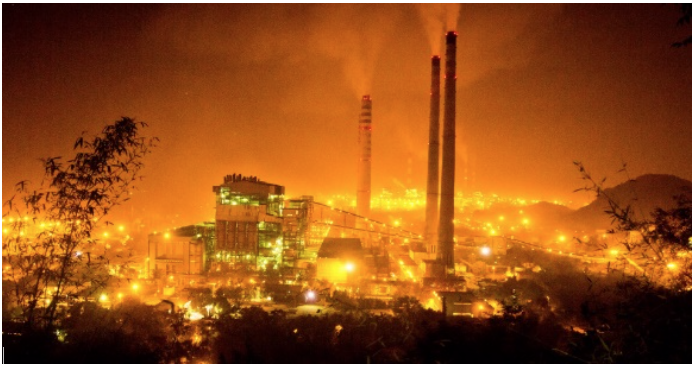 BE GREEN--As world leaders are meeting at the COP24 in Poland to discuss how to achieve goals outlined in the 2015 Paris climate agreement, scientists and activists are raising alarm about "brutal" new research published by the Global Carbon Project on Wednesday which offers the international community a "reality check" by showing that carbon emissions will hit a record high this year.

"We've got a LOT of work to do folks. After flat-lining for 3 years, CO2 emissions have now ticked up two years straight," tweeted Penn State climate scientist Michael Mann, linking to the Washington Post's report on the new data. Mann also called for electing politicians willing to take the urgent actions that experts increasingly warn are needed to avert global catastrophe.

Between 2014 and 2016, emissions remained largely flat, leading to hopes that the world was beginning to turn a corner. Those hopes have been dashed. In 2017, global emissions grew 1.6 percent. The rise in 2018 is projected to be 2.7 percent.

The expected increase, which would bring fossil fuel and industrial emissions to a record high of 37.1 billion tons of carbon dioxide per year, is being driven by nearly 5 percent emissions growth in China and more than 6 percent in India, researchers estimated, along with growth in many other nations throughout the world. Emissions by the United States grew 2.5 percent, while emissions by the European Union declined by just under 1 percent.

While the surge in the U.S. was driven partly by a cold winter and hot summer—which led to an increased use of heating and air conditioning—China's rise was notably fueled by investment in coal-powered manufacturing. Researchers say reversing this trend will require climate-friendly reforms to transportation, manufacturing, and agriculture. 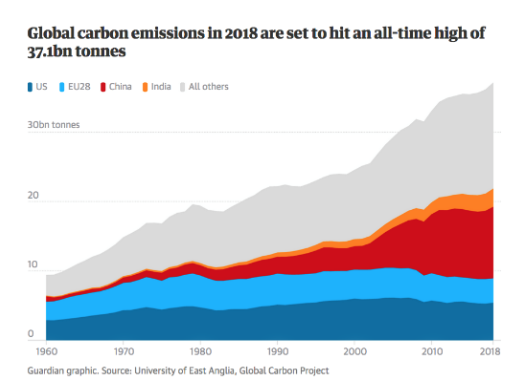 "This is terrible news," Andrew Jones, co-director of Climate Interactive, told the Associated Press about the project's findings. "Every year that we delay serious climate action, the Paris goals become difficult to meet."

The Paris agreement—which President Donald Trump has vowed to withdraw from, making the United States the only nation on the planet that doesn't support the international accord—aims to keep "global temperature rise this century well below 2 degrees Celsius above pre-industrial levels and to pursue efforts to limit the temperature increase even further to 1.5 degrees Celsius."

"This is the latest and most alarming warning to the world that we are speeding towards the precipice of irrevocable climate chaos. Sadly, President Trump doesn't care. But if he won't act, other leaders must."
—Wenonah Hauter, Food & Water Watch

Noting that the Trump administration has turned its back on the accord and consistently worked to roll back climate regulations in favor of polluting industries, Food & Water Watch executive director Wenonah Hauter called on elected officials at lower levels of the U.S. government to take action to curb planet-warming emissions.

"This is the latest and most alarming warning to the world that we are speeding towards the precipice of irrevocable climate chaos. Sadly, President Trump doesn't care. But if he won't act, other leaders must," Hauter said in a statement, responding to the new research.

"It's time for the governors of our country to adequately address this impending climate crisis by enacting immediate moratoria on all new fossil fuel development," she added. "This is the bold, urgent action that the latest science calls for, and the response that our future generations are owed."

The new data follows a World Meteorological Organization report from November that found atmospheric concentrations of the top three greenhouse gases driving global warming—carbon dioxide, methane, and nitrous oxide—have hit record high levels, which provoked warnings that "without rapid cuts in CO2 and other greenhouse gases, climate change will have increasingly destructive and irreversible impacts on life on Earth."