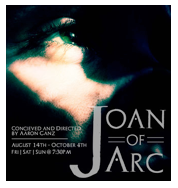 GELFAND’S WORLD--I'm willing to be mystified by a work of art if there's something worth being mystified about. Perhaps this may be the essence of the artistic. That brings up this year's topic, which is Joan of Arc. There was a major biography, and there have been a couple of attempts to interpret the Joan of Arc story in LA theaters this year. The earlier version was rather disappointing. Now, the TE San Pedro Rep company has created its own version, an attempt that is simultaneously mystifying and satisfying.

What this later production does not do is follow the old scripts that have been trotted out in recent years and past centuries. What it also avoids is an attempt to place Joan's life in the context of history. It helps the viewer to come to the production with some understanding, such as the fact that Joan changed the course of history by battling the English in the early 1400s.. She contributed to the resolution of the Hundred Years' War, and may have been a contributor to the end of the middle ages.

The TESPR company concentrates on Joan as a human character, moving back and forth in time between her girlish phase, her imprisonment prior to her execution, and the point in her life at which she convinced the French authorities to allow her to become a military leader. All along, Joan is subject to visions and inner voices, a historical possibility that has been debated for the past half-thousand years.

TESPR is basically a company of talented young actors who have to be able to dance and to sing, in addition to being able to deliver their lines in a believable way. Thus, this production of Joan is able to present a chorus, both male and female, who alternate between the harsh and accusing -- "You will burn!" -- to the angelic voices and loving relatives who manage to convince the young Joan that she is something special.

The production mixes the song numbers with a balletic form of modern dance. Joan of Arc, played by the ever-adaptable Paris Langle, expresses Joan's inner thoughts through motion, even as she alternates the kinetic with the still, using facial expression to communicate girlish joy, the terrors of imprisonment, and a frankly flirtatious approach to France's next king.

To the history buff, this is a play that strips out the dull explication -- how was it that the French nobility accepted Joan as someone sent by God, and to what extent did they? -- and simply alludes to the story that Joan picked out the French prince from a crowd of people, having never been introduced to him before. It's an old story which could be expanded into a 15 minute scene, or as produced here, is simply the introduction to a balletic and choral number.

This production of Joan of Arc represents the development of a theme and style that is peculiar to this company. Previously, The Lady of Shalott, based on a story from the Arthurian legends, presented the central character largely in dance and mime. What seems to be developing is a production style that is a mix of operatic and balletic presentations, leaving it to the audience to abstract what they will from the images and sounds. It is a theme and style being developed by company director Aaron Ganz in collaboration with Paris Langle and Rachel McVay, along with choreographer Laura Linda Bradley. It's not lost on audiences and critics that this style concentrates on strong women, women who suffer but persevere.

One is tempted to describe these recent TESPR productions with words like surreal or expressionistic.  I suspect that the term balletic is more appropriate, as classical ballet has been used to tell stories with symbols, music, and movement rather than with a lot of words. Still, there is definitely some of the expressionist in this piece. At one point, an actress reveals words written on her midriff, saying "Scars are proof that God heals." It's a bit jarring in the context, but serves to convey to the audience that there are multiple levels of messaging going on.

In considering how these performances combine the words, the song, and the dance, one is reminded of Gustav Mahler's remark that a symphony is like the world: it must embrace everything. Mahler also remarked that if a composer could say what he had to say in words he would not bother trying to say it in music. Perhaps that is a reasonably good explanation art, and perhaps it goes to our initial interest in the mysterious nature of theatrical art done well.

In individual performances, Melissa Ortiz does a marvelous vocal number adapted from Edith Piaf. A number of company members who have had leading roles in previous shows join newcomers in filling out the cast.

In a previous column, I wrote about the way that film and television companies are given access to city streets and residential neighborhoods almost without limit. I also mentioned the board of FilmLA, the organization that is in charge of giving out permits. One former board member explained that the board is supposed to be made up of one-third taken from the industry, one-third from the industry unions, and one-third from community organizations. You wouldn't know about the community representatives based on the FilmLA website, but I thank Linda Alexander for this information. What I don't see is any official role for the LA City neighborhood councils, in spite of the fact that the City Charter created the neighborhood council system as a way that the city residents as a whole could be heard. The makeup of the FilmLA board is a problem, and it should be fixed.