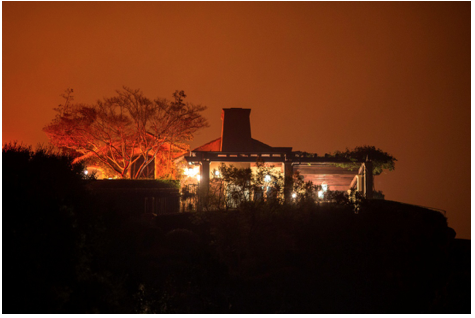 BE GREEN---As a December megafire continues to spread, there are new indications that occasionally extreme fire weather will persist across Southern California for at least two more weeks, with an urgent new weather forecast for the next few days. California's terrifying, Dantean December will last a little longer. (Photo above: The Thomas Fire approaches a home on December 12th, 2017, in Montecito, California.)

On Wednesday, the National Weather Service expanded a Red Flag Warning to include virtually the entire Los Angeles metro area, cautioning that "very rapid fire spread, long-range spotting, and extreme fire behavior" were likely. An outbreak of erratic "sundowner" winds followed by a strong burst of Santa Ana winds is now in the forecast for the area around Santa Barbara, beginning Thursday night.

Now in its 10th day, the massive Thomas fire in Ventura and Santa Barbara counties has swelled to more than 240,000 acres—eight times the size of San Francisco—one of the worst fires in California history. More than 970 homes and buildings have been destroyed, and an additional 18,000 structures remain threatened.

Fire crews are rushing to build containment lines and fire breaks to protect coastal communities before the stronger winds arrive, the Los Angeles Times reports. "When the wind starts pushing it, we can throw everything we have at it and it's not going to do any good," said Mark Brown, an operations section chief for the California Department of Forestry and Fire Protection.

The long-duration Santa Ana wind event will continue at least through Sunday, and weather models continue to show absolutely no rainfall until December 30th at the earliest—as far out as long-range forecasts go. Temperatures are likely to remain in the 80s—record highs that are 10 to 15 degrees warmer than normal for this time of year—with relative humidities in the single digits for much of the rest of the month. These are remarkably unusual conditions for what is typically the beginning of the wettest time of the year.

It's been more than 250 days since it rained in Southern California. This combination of extremely dry conditions, warm temperatures, strong winds, and continued lack of rain has produced an unprecedented potential for rapid fire growth in the middle of the rainy season.

That the Thomas fire exists at all right now has stunned Daniel Swain, a climate scientist at the University of California–Los Angeles. "It really is incredible this is happening in December," he recently wrote on Twitter.

In an interview with Pacific Standard, Swain says that given the unusual weather conditions, the Thomas Fire "has the potential to become the largest fire in California history." That spot is currently held by 2003's Cedar Fire in San Diego, which burned more than 2,800 homes and buildings and grew to more than 270,000 acres.

Swain's own research has linked human-caused climate change to an increased intensity and likelihood of unusually persistent warm winters along the West Coast. New research released this month by a different group of experts found a previously undescribed connection between melting Arctic sea ice and persistent wintertime drought in California. The combination of these effects amounts to an atmospheric chain reaction that could already be making fire seasons linger later in the year—exactly what seems to be happening now.

Swain notes that the region around the Thomas Fire has seen its warmest and second-driest start to the rainy season on record. "Fires will continue to burn very intensely in Southern California until the rains finally arrive," he says.

In a worst-case scenario, the Thomas Fire could grow much larger than the Cedar Fire, and ultimately reshape the landscape of the vast Los Padres National Forest spanning hundreds of thousands of acres.

(Eric Holthaus is a meteorologist, climate nerd, host of the podcast Our Warm Regards. This perspective was posted originally at Pacific Standard.)