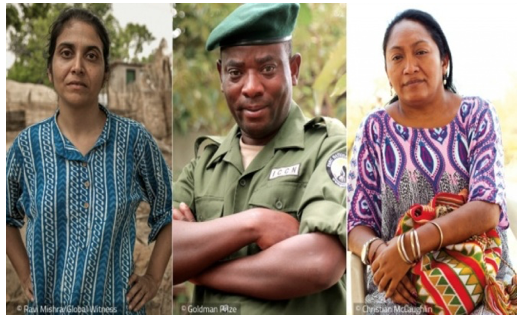 BEGREEN--Last year was the deadliest in history to be an environmental activist, according to a new report that found, on average, nearly four people were killed per week. (Photos:  ("We are fighting for our lands, for our water, for our lives," Jakeline (right), who has received death threats for protesting mining in Colombia, told Global Witness for the report.)

"Conflicts over the control of land and natural resources were an underlying factor in almost every killing in 2016." –Global Witness report

Defenders of the Earth, released by U.K.-based human rights group Global Witness, lists the names and locations of 200 environmental advocates who were killed around the world. While the report found Brazil, Colombia, and the Philippines were the nations with the most murdered environmentalists in 2016, Honduras has been the deadliest country for environmental activists over the last decade.

Last year, Nicaragua was the most dangerous country per capita, where at least 11 environmental activists were killed—all but one were indigenous. In 2013, the Nicaraguan government agreed to allow a Chinese company to build a canal linking the Atlantic and Pacific Oceans; the canal will also force up to 120,000 indigenous people to relocate, according to the report.

"We have carried out 87 marches, demanding that they respect our rights and we have had no response. The only response we have had is the bullet," Nicaraguan activist Francisca Ramírez said of her government's response to protests. "They sell the image that we are against development. We are not against development, we are against injustice,” added Ramírez, who has been threatened, assaulted, and arrested for protesting the canal.

"Governments, companies, and investors have a duty to guarantee that communities are consulted about the projects that affect them, that activists are protected from violence, and that perpetrators are brought to justice," Global Witness campaigner Ben Leather said in statement. "States are breaking their own laws and failing their citizens in the worst possible way. Brave activists are being murdered, attacked and criminalized by the very people who are supposed to protect them."

Key findings from the report include:

John Knox, UN special rapporteur on human rights and the environment, said to the Guardian:

"There is now an overwhelming incentive to wreck the environment for economic reasons. The people most at risk are people who are already marginalized and excluded from politics and judicial redress, and are dependent on the environment. The countries do not respect the rule of law. Everywhere in the world, defenders are facing threats.

"There is an epidemic now, a culture of impunity, a sense that anyone can kill environmental defenders without repercussions, eliminate anyone who stands in the way. It [comes from] mining, agribusiness, illegal logging and dam building."

James Savage of The Fund for Global Human Rights responded to the findings on Twitter:

Though the group did not document any murders of environmental activists in the United States in 2016, U.S. environmentalists across the country encountered violence. Notably, as Common Dreams reported, North Dakota police, clad in riot gear, responded to Indigenous-led protests of the Dakota Access Pipeline (DAPL) with rubber bullets, water cannons, and teargas grenades. Though the DAPL protests carried on for several months, in a single night last November, 26 unarmed protesters were hospitalized and more than 300 were injured following a confrontation with law enforcement.

(Jessica Corbett writes for Common Dreams … where this piece was first posted.