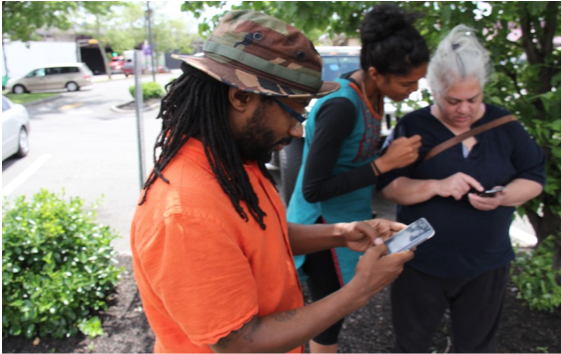 I was invited to speak on science and technology and the power of local data.  The conference was mind blowing and an important reminder that a decade ago the idea of real time data on energy efficiency, Artificial intelligence (AI), the health and wellness components of green building, and augmented reality, all seemed like stuff in comic books or science fiction movies.  Not any more.  Much of this stuff is now part and parcel of our everyday reality.

I start here because early in 2017 the new administration has begun to take dramatic steps to restrict access to public information.  More specifically, within the first 100 days members of Congress have introduced a pair of bills aimed at rolling back the Obama administration’s fair housing reforms; and hidden in the “Local Zoning Protection Act” are stipulations that seek to curtail the production and distribution of data about racial segregation.

According to the National Low-Income Housing Coalition, “The bills would also prohibit federal funds from being used for the HUD database containing geospatial information regarding community racial disparities and disparities in access to affordable housing.”

The lockdown on local data raises serious questions about how local governments and nonprofits can develop neighborhood-level early warning systems that can help city leaders and community advocates combat gentrification, displacement, growing income inequality, and the increasing suburbanization of poverty.  How can we foster two-way feedback loops between cities and communities to identify unique neighborhood characteristics if we are not being encouraged and supported to collect local data on race, space, place, and waste? How will we repurpose, visualize, and integrate the various municipal and external data sources to meet community needs if we constrict the role of local community driven data?

These are important questions because across the U.S., communities are aspiring to become more economically robust, resilient, equitable, sustainable, and strong.  However, while there is little debate that mixed-use communities are desirable assets, few communities have found the right package of investment, suite of services, or policy interventions that can turn burned out buildings into thriving arts and commercial corridors, innovation hubs, and culturally and community responsive spaces that truly serve the needs of communities.

But what if cities and community leaders could see inequalities in real time and had an early warning system that could help produce more equitable outcomes?  This is where the new mapping equity app called Streetwyze comes into play to help make the invisible visible.

How Would This Work

Streetwyze is a mobile, mapping, and SMS platform that collects local knowledge about how people are experiencing cities and turns them into actionable analytics.  The power of the app is that it makes local knowledge accessible within and outside of government by creating two-way feedback loops and data visualizations between neighborhoods and cities so that they co-produce policies that help secure shared benefits.  By integrating community-generated data with predictive analytics, cities and community leaders are empowered with forward-looking knowledge that can track equity indicators, identify hot spots and cool spots for equitable development, and predict future trajectories for vulnerable populations.

This work is the leading edge of a new “science of cities,” “equitable cities,” and “data-driven cities” that build upon and extends the earlier “smart cities” work of john a. powell’s Opportunity Mapping project, PolicyLink’s National Equity Atlas, the EcoDistrict protocol, Enterprise Community Partner’s Opportunity Index, as well as private businesses like Neighborland, Zillow, and Redfin’s Walkscore to name a few.

In the City of Angels, the Mapping LA project created by the LA Times in 2009, was one of the earlier attempts to include community voices by drawing boundary lines for 158 cities and unincorporated places within Los Angeles County, California, 114 neighborhoods within the City of Los Angeles and 42 unincorporated areas. The maps were then "redrawn with the help of readers who agreed or disagreed with our initial boundaries." After reviewing this collective knowledge, Times staffers adjusted more than 100 boundaries, eliminated some names and added others.

Where Has Streetwyze Been Tried, and What Have We Learned?

What is new about the Streetwyze Platform is that community groups, artists, advocates, and everyday people working to improve the neighborhoods where they live, learn, work, and play, rarely have had the opportunity to integrate their lived experience into big data sets, computer simulations, and advanced modeling techniques to improve urban patterns and help cities function more effectively.

Though still in its early stages, the Ironbound Community Corporation and New Jersey EJ Alliance are already using Streetwyze to measure air quality in Newark, New Jersey, as part of Streetwyze’s beta effort there (supported by the Kresge Foundation).  Despite the fact that the initial focus of the mapping was around mapping environmental health hazards, the majority of data that has been posted by local community members is positive—over 70% of reviews are of “good stuff”.  This is powerful given the public/media perception of Newark, NJ, which tends to be rather negative.  Streetwyze has finally given the community a voice to narrate their own story of their community, and the story is largely positive.

This type of community driven information has perked the ears of long time innovators of creative place-making, such as the Denver Housing Authority (DHA) lead by Ismael Guerrero who, with support from U.S. Bank, is launching the Streetwyze platform to help conduct health impact assessments (HIA’s) for new low-income housing development that will serve Denver’s Mariposa neighborhood in 2017.

But the question remains: are cities ready to integrate real-time, community-generated data and predictive analytics into their decision-making and participatory planning processes?  Recently Bloomberg Philanthropies launched What Works Cities and The Rockefeller Foundation launched 100 Resilient Cities to help improve the capacity of local governments to use civic tech, data democratization, and advanced simulations to improve city services, inform decision-making, and increase community engagement.

The Streetwyze app is one of many that are at the forefront of innovation, creative place-making, place-keeping, and local knowledge mobilization for cities and communities.  In the future we envision this real-time, crowd-sourced, early warning system becoming a critical component of participatory planning initiatives with Green Building experts in the U.S. and beyond.

On April 20th 2017 at the 16th annual Municipal Green Building Conference and Expo (open to all), Streetwyze will bring its message of building a community driven data revolution to Los Angeles, with an explicit look at race, power, environment, gentrification, displacement, opportunity, and promoting what the Chief resiliency officer of Oakland Kiran Jain refers to as “digital resiliency.”

“Digital resiliency” for the 21st century understands that if cities are going to have community end users at an equity table as equal partners in the planning and decision-making process, cites are going to have to learn how to use mobile, mapping, and SMS apps like Streetwyze to democratize data, democratize decision-making, and reveal hidden patterns in order to be more culturally and community responsive to, and predictive of, past, present, and future community change.

(Dr. Antwi Akom is a Professor of Africana Studies and Founding Director of UCSF/SFSU’s Social Innovation Lab.  He is also a faculty affiliate with UCSF’s Center for Vulnerable Populations in the Medical School. He co-founded Streetwyze, recognized by Atlantic Citylab, the Root, and Tech Crunch as one of the top new tech tools to empowering vulnerable populations.)