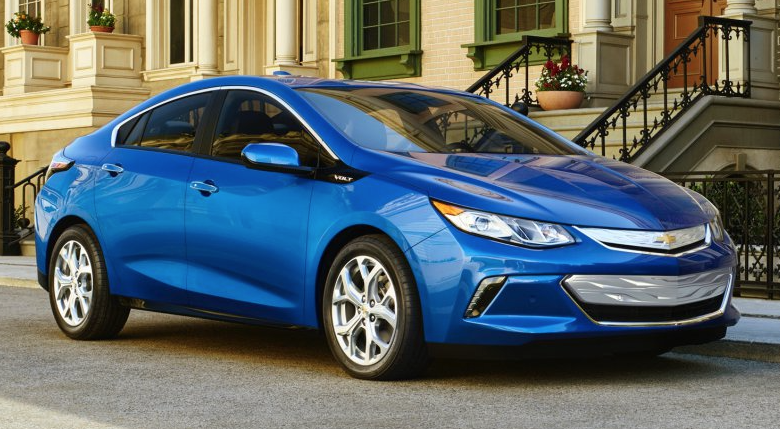 Every year, Green Car Reports picks a new car or model line that we feel is the best green car for that new model year.  This year, we picked a car that's the all-new version of one that was revolutionary when it was introduced several years ago. The latest version improves on it in pretty much every dimension.

This year, the Green Car Reports Best Car To Buy 2016 is the Chevrolet Volt.

The second generation of the Chevy Volt stays true to the original, and radical, concept of a range-extended electric car.  But it also fixes most of the shortcomings of the original.  It remains a five-door hatchback, but it's a much better-looking car than the old one, with a more rakish profile and crisper lines.

Inside, the dash is lower, and Chevrolet's cleaned up both the driving interface and the cabin finishes.

The irritating touch-sensitive switches are gone, and the Volt's more conventional controls make for a more intuitive driving experience.  There's not much more space inside, but it's quieter and more comfortable--and at last it has a fifth "seating position." That's actually just a padded hump on the back bench, and it's for emergencies only, since the rider has to straddle the battery pack. It's fine for agile teenage soccer players, but not so much for aged parents.

Perhaps most important to buyers will be that the new Volt's electric range has risen from 38 miles to an impressive 53 miles.  Chevy says that means nine of every 10 Volt trips will run solely on electricity from the power grid.

That comes courtesy of a larger 18.4-kilowatt-hour battery pack, in the tunnel and under the rear seat. GM now also uses more of its packs' energy capacity.  When running on gasoline, the 2016 Volt's fuel economy has risen from 37 mpg to 42 mpg as well. The engine is now a 1.5-liter four-cylinder version of GM's new Ecotec series, and the total powertrain output is 149 horsepower.

The 0-to-60-mph acceleration time is lower, about 8.0 seconds, but the engine and the car are notable for much better noise suppression under maximum load.

Little details matter too: The charging cord now has its own compartment at the side of the load bay, meaning owners don't have to unload all their cargo to recharge.  We've driven the 2016 Volt several times, both in temperate California weather and chillier Northeastern climes.

Each time, it delivered the rated electric range, recharged in roughly four hours, and ran quietly and smoothly when the engine kicked on. We've covered the 2016 Volt quite a lot since it was unveiled this past January. It was crystal-clear that it would be a nominee for the Best Car To Buy award.

What we didn't expect was how much of an improvement over the old car it would be--and how good a car it is.

Congratulations to Chevy, and the entire Volt team.