PLATKIN ON PLANNING--At a recent meeting of LA’s Neighborhood Council Congress my eyes glazed over at the session on Mayor Garcetti’s Great Streets initiative.  I had assumed that its first streets were prototypes.  They were to be a catalyst for a broad, citywide program to systematically upgrade the city’s entire street system.  I presumed this included planting street trees, turning parkways into community gardens, landscaping median strips, repaving sidewalks and streets, installing ADA curb cuts, undergrounding utility lines, and upgrading street lights and street sweeping – for starters.

To my dismay, however, I discovered that the Great Streets program is really small projects adopted by local civic groups, especially Neighborhood Councils.  There was no discussion of the specific tasks assigned to the City’s operating departments, as well as the far-reaching reallocation of the City’s budget required for these prototypes to morph into broad, citywide changes of LA’s entire street system.

In fact, there was barely any mention of what actually makes a great street; so to fill that vacuum, I can let you know there are no secrets.  Two famous urban experts, Jane Jacobs of New York City and later Toronto, as well as the former Director of Planning in San Francisco, Alan Jacobs, wrote the classic texts on Great Streets.

Furthermore, we have local streets that could easily become models for the transformation of LA’s vast street system.  These include Santa Monica Boulevard in West Hollywood and 1st Street at the Grove Shopping Center.  Of course, there are many other examples, and I have no doubt that CityWatch readers can nominate their own favorite streets as models. 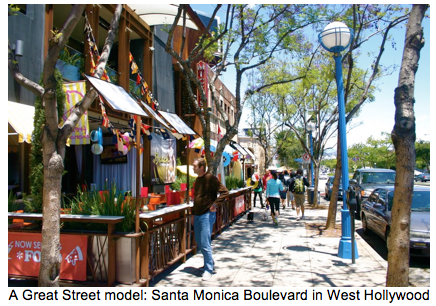 So, to save you the time of wading through the works of Jane and Alan Jacobs (no relation), let me list some basic components of great streets.

Wide sidewalks to promote walking.  Unfortunately in Los Angeles some streets do not yet have sidewalks, while other sidewalks are so uneven or lack legally required ADA curb cuts that walking becomes a challenge, especially for those with strollers or in wheel chairs.  Sidewalks also need short, safe spans to cross intersections, including help from pedestrian-activated crosswalk lights, zebra-striped crosswalks, and bulb outs at intersections.

Street furniture that is visually coherent.  This includes benches, garbage cans, bicycle racks, newspaper vending machines, and light poles that have a similar design and color.  While LA once settled on Spring Street Green as its official color for streetscape elements, good luck if you can anything other than a metal street light pole painted this color.

Minimal commercial signage.  Forget billboards, supergraphics, roof signs, sandwich signs, poles signs, or even temporary banners adorning light poles.  Several Specific Plan and Community Design Overlay districts have these requirements, but the enforcement of their sign regulations is spotty.  As for the rest of the Los Angeles, commercial signage, both legal and bootlegged, is atrocious.

Stores that engage pedestrians.  Stores and restaurants should be built to the front property line, with just enough room for basic landscaping.  In addition, store entrances need to face the street, with large windows in front and parking lots at the side or back.  Strip malls and mini-malls are at the top of the what-not-to-build list.

Shade trees that create a canopy.  While nearly all other Southern California cities have planted and maintained remarkable urban forests, Los Angeles has not.  Many of our streets lack any parkway trees, while other streets are hit-and-miss, often without any trees at all.  Luckily, our amazing climate allows many evergreen trees, flowering trees, and beautiful shade trees.  But, there is a catch.  The City, not local residents or merchants, must be in charge of tree selection, planting, and maintenance.  As demonstrated by our fair city, a tree canopy does not happen by itself.

Undergrounding utility lines.  In Los Angeles this has already happened for street lights, but seldom for the LADWP’s power lines, as well as the telephone and cable lines that piggy-back on the city’s utility poles.   The price we pay for this arrangement is not just extraordinary visual pollution, but utility lines that predictably snap during windstorms and earthquakes. 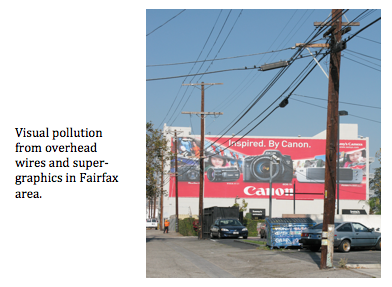 The City’s $800,000 allocation for the Great Streets is not enough.  It takes about $5,000,000 per mile to convert an existing street to a great street, so the actual figure is much, much higher.  The price of repairing LA’s sidewalks is $1.5 billion.  The other components of great streets, such as undergrounding utility lines, sign control, pedestrian and bicycle improvements, and tree planting, will also cost similar amounts.

To those who say this money is not there, they should consider that the $1.34 billion spent to add 10 miles of HOV lanes to the 405 in West LA could have instead produced 270 miles of new Great Streets in Los Angeles.  This is enough money to totally upgrade all of the major north-south and east-west roadways between DTLA and Santa Monica.

If we consider the similar costs of double-decking the Harbor Freeway and re-engineering the 10 and 60 freeways east of the downtown, LA could already have 800 miles of Great Streets.

While this enormous price tag explains why the Great Streets program is limping along through the Neighborhood Council adoption process, let’s not kid ourselves.  This stopgap approach will never turn LA into a world-class city.

The real Great Streets goal should be nothing less that turning all of LA’s streets into Great Streets, not just a few blocks in each Council District selected to promote geographical equity.  Since LA has 7,500 miles of streets, this means the tasks and the cost are enormous.  But, if other cities, including entire countries like Holland, treat every street as a Great Street, why not Los Angeles?

This is certainly a nobler objective, benefiting far more residents, employees, and visitors, than ballyhoo about “growth,” a code word for real estate bubbles.  Instead, the real growth we need and deserve is qualitative improvement to LA’s public infrastructure and services, with a primary focus on streets and sidewalks.

(Dick Platkin is a former LA city planner who writes on planning issues for CityWatch. He serves on the Board of the Beverly Wilshire Homes Association and welcomes questions and comments at rhplatkin@gmail.com.) Edited for CityWatch by Linda Abrams.