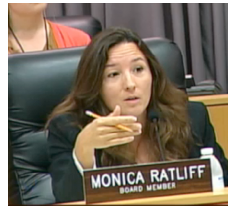 EDUCATION POLITICS--As the country’s second largest school district seeks a new superintendent, the LA Unified School Board is exploring The Broad Foundation’s proposal to move half of the district’s students into charter schools. LA Unified Board Member Mónica Ratliff (photo), chair of the District’s Budget, Facilities and Audit Committee, is exploring the possibility of converting all District schools into charters, according to the agenda of the committee’s November 17 meeting. This move would, in effect, dissolve LAUSD, creating the country’s largest charter district.

The Eli and Edythe Broad Foundation proposal aims to fast-track the expansion of charter schools, which currently serve 16% of the district’s students, channeling $490M into the proposal over the next eight years. (An ambitious proposal presumably would require additional funding so the proposal includes a list of potential sources that includes names like Gates, Bloomberg, Annenberg, and Hewlett.)

If the Broad Foundation proposal seems formidable, the all or nothing plan explored by Ratliff et al. is like fixing a small dent in the bumper by buying a new Tesla. Establishing a charter district or even moving half of its students into charter schools isn’t some magic elixir.

Education has long been the path out of poverty. A college education is, in most cases, a determinant in upward mobility. As cited in a New York Times article by Eduardo Porter, male high school graduates who don’t attend college earn a fifth less than they did 35 years ago. The gap between college grads and those without degrees has widened.

When I taught in LAUSD, the motto was “From Kindergarten to College.” We worked to get every student prepared to achieve a college degree. Despite our efforts, a divide remains. Students with college-educated parents are more than twice as likely to pursue higher education. Children with parents who dropped out of high school are seven times less likely attend college.

Certainly, there are exceptions. We shouldn’t give up on our efforts to provide all students with a quality education, which also helps our economy and society at large. However, educating a diverse, urban student body requires addressing a broad range of challenges, not just handing over the keys to a charter system. Instead of funneling over $20M to address “legislative interference” and to convince parents to apply to charter schools, why not address issues like teacher/student ratio or provide teachers with better resources?

In the New Orleans Recovery School District, in which charter schools serve over 90 percent of the city’s students, 79 percent of the charter schools held a D or F rating by the Louisiana Department of Education eight years after Katrina, according to The Investigative Fund, charter schools, like traditional schools, well-run, successful schools, as well as failing ones. However, transferring to a charter-only model certainly does not remove the existence of underperforming schools.

California currently has eight all-charter districts, four of which only have one school. The largest of these districts has seven schools, serving 2,400 students. In comparison, LAUSD has 1,274 schools.

Expanding the number of charter schools would require substantial funding. Just this year, the U.S. Department of Education announced California will receive none of the $125 million allocated for the next funding round. The state had received $250M in federal funds over the past five years.

Converting LAUSD to a charter-only district would require a number of conditions, including at least 50 percent approval of teachers, finding teachers to employ during an existing teacher shortage, and securing facilities.

If only half of LAUSD’s students were moved to charter schools, per the Broad Foundation proposal, per pupil funding for the public schools left holding the bag would be decimated.

According to the LA Times, the other dirty little secret of the Broad proposal is the allocation of $43.1M for a “teacher pipeline” to recruit young, inexperienced teachers from Teach for America. Research from UC Berkeley and a 2015 analysis from the National Bureau of Economic Research show that TFA participants tend to remain in the classroom for shorter periods of time than traditionally credentialed teachers.

Should LA residents be wary of the Broad Foundation mission or transition to a charter district?

An aggressive undertaking to move a majority of LAUSD’s students to charter schools would likely bring an educational landscape of short-term inexperienced and overworked teachers, as well as fewer resources for the remaining students.