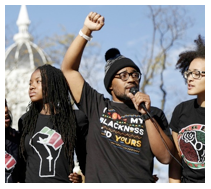 RACE JUSTICE ON THE MOVE--Empowered by successful campus organizing at the University of Missouri, where protests over racial tensions culminated Monday in the resignation of University president Tim Wolfe, students and faculty at schools across the country are seizing their moment to amplify the call for racial justice.

As CNN noted on Tuesday, "It's not just Missouri where students, concerned about the racial climate at their schools, are wielding newfound power. Campus activists across the country, fed up with what they see as their administrators' inadequate response to racial harassment, are taking matters into their own hands."

A student group called People of Color at Ithaca College (POC at IC) plans to hold a 'Solidarity Walkout' on Wednesday afternoon, "for all the injustices students of color face on this campus and other colleges nationally."

The group has a specific demand: "With University of Missouri's president stepping down, we demand [Ithaca president Tom] Rochon to do the same as it is vital to fight against both covert and overt racism in all places of education and empowerment."

Rochon, like Missouri's Wolfe, "has been under fire for his perceived soft handling of racially sensitive incidents on campus," Reuters reports.

According to The Ithacan, students involved with POC at IC handed out a document called "The Case Against Tom Rochon" to guests at several Family Weekend events around campus.

"Though it is not clear where the document originated, [it] is broken into seven sections of criticism toward Rochon's presidency," the newspaper reported, including: "his autocratic leadership," "his questionable ethics," "his incompetence," "his disregard for minority community members," and "his disconnection from what is actually happening at IC and what needs to happen."

An email has been sent out by the Ithaca Student Government Association (SGA) asking the student body for a vote of 'confidence' or 'no confidence' in Rochon, with votes due Nov. 30.

"Students have felt that he is incapable of leading the school in a manner that creates the most inclusive and diverse community as possible," said student vice president of campus affairs Yena Seo.

A group at Smith College in Northampton, Massachusetts, will be hosting its own walkout at noon on Wednesday in partnership with POC at IC, according to a Facebook event called 'Smith Stands with Ithaca and Mizzou.'

And at Yale earlier this week, a crowd of more than 1,000 gathered peacefully at the Afro-American Cultural Center for a 'March of Resilience' in solidarity with Missouri and to call attention to recent racial incidents on campus.

"It's been a tough few days," organizers stated online. "But the battle isn't over. Women of color, and people of color at Yale have forced Yale to look at itself and now, can force Yale to do more than look. We can force Yale to change."

Meanwhile, the struggle at Mizzou is not over.

"[T]he looming question now is what happens next," wrote Katherine Mangan for the Chronicle of Higher Education on Wednesday. "How does a university of 35,000 students create a climate in which students, faculty members, and the staff can feel comfortable talking about race? What concrete steps can the university system take to make the campus more welcoming to diverse students? And how does it do that in a careful, collaborative way, while being mindful that protesters might expect quick results in an age of Twitter activism?"

In a statement written on behalf of the University of Missouri Chapter of the Black Law Students Association, the chapter's president Christopher G. Hamm, Jr. posed a similar question: "What will Mizzou do to actively combat institutional and systemic racial issues on our campus?"

For its part, the chapter will "continue to partner with other students, organizations, and universities," he wrote, "to instill a greater awareness and commitment to the needs of the Black community."

Hamm concluded: "From demonstrations at UCLA, to the confederate flags being removed at Washington and Lee, to the ongoing struggles at the University of Cincinnati, we encourage our peers around the country to continue to ignite change in these trying times."

(Deirdre Fulton writes for Common Dreams … where this analysis was first posted.) (Photo: AP) Edited for CityWatch by Linda Abrams.