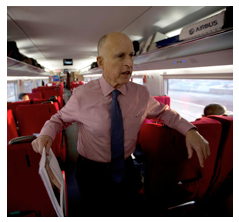 PERSPECTIVE-Time and again one hears High-Speed Rail proponents argue that since airports and highways receive government subsidies, why should we mind if HSR requires our support?

Aside from Proposition 1A’s provision barring taxpayer-funded operating subsidies, the argument that HSR is as deserving of government assistance as air and roads is specious.

The argument would bear some logic if commercial and private vehicle traffic through the San Joaquin Valley and along routes 5 and 99 in general, along with airline travel, were intended to primarily serve intrastate travel between Northern and Southern California.

Airports in California serve far more than the travelers flying between the state’s cities.

The second busiest airline market in the US is the San Francisco – Los Angeles route at around 3.75 million passengers per year. A large number for sure, but it pales in comparison to the total flying the third and fourth busiest routes between LA and New York, and LA and Chicago. Those two routes total 6.3 million. Add in service to DC, Seattle, Atlanta, Denver and other hubs and the gap widens even more. International travel turns the gap into a canyon.

Airports are gateways to the nation and the world. CAHSR connects cities where the bulk of the travel is not only discretionary, but timetables are far more flexible with our current transportation network.

You can adjust departure times far more easily between SF and LA than you can with trips to most of the nation and the world.

Highways transport more than people. Our economy depends heavily on trucks to deliver goods to the market. While rail freight is the most efficient means of transporting goods, foods and raw materials, trucks are vital to connect rail yards to local stores, warehouses and individual residences.

A few years ago, Governor Brown equated the importance of the high-speed rail project to the construction of the transcontinental railroad in the second half of the Nineteenth Century. He may have been around back then for all we know.

This is an absurd apples and oranges analogy. Probably more like fruits and nuts, with the governor as part of the latter category. The transcontinental railroad facilitated commerce. Prior to its existence, the only practical way to ship goods from coast to coast was by sea through Cape Horn, a perilous journey that took months.

Within ten years after the golden spike was driven into the last tie in 1869, $50 million of goods were shipped from California to and from the east. That’s $50 million in 1879 dollars. Trade grew exponentially afterwards.

The bullet train is designed to move passengers, a very small segment of the transit market at that. It will add little or nothing to commerce. If anything, there will be a high cost versus the limited social or environmental value.

I can accept airport and roadway subsidies. They are among the most important components of our economy. No inter-regional rail system would be able to deal with a mere fraction of the volume they carry, let along carry the products we need to survive.

We can always plan alternate and less costly ways to travel between and among California’s major cities.

And as I have stated in other articles, it is far more important to support rail/subway transportation systems that reduce local commuting traffic.

(Paul Hatfield is a CPA and serves as President of the Valley Village Homeowners Association. He blogs at Village to Village and contributes to CityWatch. The views presented are those of Mr. Hatfield and his alone. They should not be construed to represent the opinions of the VVHA or the residents of Valley Village, individually or as a group. He can be reached at: [email protected].) Edited for CityWatch by Linda Abrams.