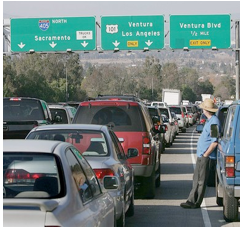 In his October 2015 LTRP Progress Update, Metro’s CEO, Phillip Washington, states “Metro is currently working on an update of the LRTP… Many of the changes underway are amazing. We have two rail lines opening next year and three more under construction… Our goal is to create a transportation system that serves all of Los Angeles County…”

SOHA’s response to Mr. Washington is simple – none of these amazing rail lines now under construction or opening next year are in the Valley. And, for its size, population and tax base, the Valley has been repeatedly ignored when it comes to rapid transit projects.

This is not a fair share. In fact, we think that the Metro’s new Long-Range Transportation Plan should include commitments to equalize the Valley’s share of countywide rapid transit within the next decade. It is possible and Metro should do it.

Why is SOHA concerned? Sherman Oaks is home to the Sepulveda Pass, one of two major southern gateways to the Valley (the Cahuenga Pass is the other). More than 330,000 cars travel through the Sepulveda Pass each day – and traffic is horribly congested.

So, where do many of the cars go instead? They use small streets in the flatlands and hillsides of Sherman Oaks and our neighbors, Encino and Studio City. We need a better way to get people through the Sepulveda Pass quickly, efficiently, and cost effectively. That better way is east-west and north-south light rail systems in the Valley, interconnected to a light rail system through the Sepulveda Pass all the way to LAX.

How can the Valley get its fair share? First, Metro needs to adjust its funding allocation process to ensure fairness to areas like the Valley that have been shortchanged on rapid transit for the last 20 years. For its LRTP update, Metro divided the County into nine subregions – one is the San Fernando Valley, comprising all portions of the City of Los Angeles north of Mulholland Drive plus the City of San Fernando.

Metro worked with these subregions and used a Mobility Matrix process to identify and prioritize more than 2,300 transportation projects across the County that were valued at $273 billion. Obviously, funds are not available for all projects. So, as explained in their October 2015 Board Report, Metro developed a target funding allocation for each subregion based on predicted population or employment, whichever is higher. The Valley subregion represents 14.66 percent of the County’s population, so Metro allocated the Valley 14.66 percent of total available funding.

SOHA believes that Metro’s subregional allocation process is flawed because it does not account for the lack of prior rapid transit expenditures in a subregion.

The Valley is a great example. As previously mentioned, it has received only five percent of currently budgeted projects (only 2 of 80 new rail stops) and has only five miles of commuter rail out of more than 300 miles countywide.

So the obvious question is: why is the Valley’s target funding allocation only based on population? Why is there no accounting for the fact that the Valley has been shortchanged on rapid transit for the past 20 years?

SOHA thinks that Metro should review this flaw in their process and adjust subregional rapid transit funding allocations based on prior rapid transit expenditures and on the extent of in-place projects in each subregion. The Valley deserves more than 14.66 percent of the funding.

Measure R already implemented a one-half cent transportation sales tax in 2009 that continues through 2039. Metro extrapolates the value of this tax for 30 years and uses the funds for their projects. But, Measure R does not provide enough to make a dent in the funds needed for new countywide rapid transit projects. Consequently, Metro plans to propose an “augment and extend” approach, similar to that approved by 70 percent of voters in Alameda County last year.

The “augment” part of Metro’s approach adds a new one-half cent transportation sales tax increase for 40 years, from 2017 through 2057. This has been affectionately called Measure R2. The “extend” part renews and extends the existing Measure R one-half cent transportation sales tax for an additional 18 years, from 2039 to 2057.

Augment and extend provides an additional huge pot of money for Metro – about $120 billion through 2057. And Metro just received the go-ahead from the state to pursue their new transportation sales taxes through Senate Bill SB 767 (de León) that was signed by Governor Brown on October 7, 2015.

Metro is now formulating its strategy for an LRTP sales tax measure on the November 2016 ballot.

A ballot measure for new taxes requires two-thirds voter approval…and Metro’s Valley Subregion comprises 15 percent of the County’s population -- almost 20 percent if you add Burbank and Glendale (which are in another subregion).

The bottomline here is:  Metro needs strong support from Valley residents for this LRTP transportation sales tax measure if it expects to achieve a two-thirds vote countywide.

In addition, Valley light rail projects need airtight commitments from Metro. SOHA has been participating in Metro’s transportation planning processes, attending public meetings, providing inputs to Metro and elected officials, and polling local residents. We are also part of the Valley on Track alliance, which seeks to get the Valley its fair share of rapid transit.

SOHA participated in two important San Fernando Valley Council of Governments meetings in mid-2015 where the SFVCOG reviewed and approved its recommended transit projects and budgets for the Valley subregion, which were then submitted to Metro.

The recommended major projects are (1) the East Valley Transit Corridor, (2) conversion of the existing Orange Line busway to light rail, and (3) a subway through the Sepulveda Pass Corridor. The SFVCOG was courageous because its recommended project costs far exceeded Metro’s target funding allocation for the Valley subregion -- the implication being that the Valley has never received its fair share of rapid transit.

The Orange Line conversion project was added through a motion by Sherman Oaks’ new LA City Councilman, David Ryu, because he understands the importance of this project to his district. The Sepulveda Pass subway is the keystone and has been a long-term desire of Valley residents. In fact, Metro conducted a survey of voters in March 2015 that noted, “San Fernando Valley residents and self-reported likely November 2016 voters are more likely to vote for the [transportation sales tax] measure if it improves traffic flow on the 101 freeway and connects the San Fernando Valley to LAX by a subway line under the Sepulveda Pass.”

In summary, SOHA completely agrees with and supports the SFVCOG’s recommendations. The Valley needs legally binding commitments from Metro for the following three projects:

Metro has a lot more work to do on their Long-Range Transportation Plan. They will be conducting stakeholder outreach from October/November 2015 through May 2016, as well as community workshops from February 2016 through May 2016. These are important meetings where Valley residents and businesses must make their demands known.

The Valley supported Measure R in 2008 but received essentially zero light rail projects in return. SOHA knows that we all need and want better rapid transit to alleviate the traffic snarls that we face. But if we are to support any new transportation sales tax measures on the November 2016 ballot, we must unite and demand airtight commitments for serious near-term rapid transit light rail projects from Metro.

The Valley deserves its fair share. And we will not be fooled a second time.

(Bob Anderson is Chair of the Transportation Committee of the Sherman Oaks Homeowner Association. He can be reached at [email protected].) Edited for CityWatch by Linda Abrams.