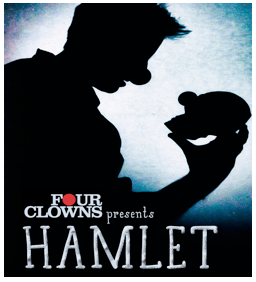 GELFAND’S WORLD--Shakespeare's Hamlet is the quintessential tragedy. It involves a somber and brooding look at death itself (Alas, poor Yorick) in between revelations of human madness and greed. Shakespeare being Shakespeare, there is also a lot of material that can be played for laughs. But what if you were to take bits and pieces of the Hamlet story and string them together as a comedic parody, or to describe things more ac curately, as a lampoon?

It's not that farfetched an idea, actually. I've seen the Royal Shakespeare Company do one play where the actors were seated atop plexiglass platforms while playing with giant slinkies. It worked just fine. Shakespeare's texts manage to carry their stories, pretty much however the director and designer choose to play them.

Four Clowns is a theater company that combines traditional acting technique with the zany and the slapstick. In Buster Keaton's day, falling on your behind was a practiced art. Audiences at vaudeville theaters expected and saw kicks, pratfalls, and slaps. The current Four Clowns presentation stars 9 comedic talents in a slapstick lampoon of Shakespeare's Hamlet. They borrow from the theater of pratfalls, while occasionally bringing out something deep and a little novel in the long tradition of Hamlet productions.

Making fun of the world's most famous tragedy is arguably a risky thing to do. Hamlet is, one would think, not to be trifled with. Four Clowns more than trifles with Hamlet, turning elements of Shakespeare's text into over-the-top clowning. Out of this performance, we get a few new insights into some of the characters, along with a boatload of laughs and giggles.

We start with the ghost of Hamlet's murdered father. In this performance, Joe DeSoto plays the ghost as creepy, almost a little perverted. He wants revenge for his own murder, and jumps into the action at unexpected spots to make known his emotional need and, let's admit it, to get the laugh. It's an unusual but successful approach.

Hamlet is played by Andrew Eiden, in a performance that goes back and forth between the clownish and the traditionally tragic. At one point, Eiden essays the To Be or Not to Be speech without comical flourish or affectation. He simply speaks the words quietly and with meaning, lending more presence to the thought than we would find in the more traditional scenery chewing approach (that is to say loud). It's Eiden's tour de force. Within moments prince Hamlet returns to slapstick and the zany.

The text of the play involves people who are either literally crazy, as in the character Ophelia, or who feign madness, as in the character Hamlet. This Hamlet gives the traditional speech about feigning madness, and then pulls a clown's bulbous red nose-piece onto his face. Hamlet becomes both clown in the special way of this production, and also as the theatrical character faking his own insanity. Madness can be feigned as clowning, and thereby made to come across as authentically mad.

Ophelia is played by the almost unbearably cute Elizabeth Godley, who owns a radiant smile  that in the right circumstances -- that is to say, when the smile is inappropriate to the plot point -- carries comedic effect. Her performance as Ophelia is a little reminiscent of her performance as the mostly mute clown girl in  the Hollywood Fringe festival. Some understanding director should find a use for her abilities in television or film.

Charlotte Chanler as Queen Gertrude helps us to understand the question that so often goes unanswered in the traditional Hamlet performance. What does she see in the new king, the man who murdered his own brother to gain the crown? In most performances, we are left either to guess or simply not to know. Chanler answers the question most directly. It is lust and greed. She communicates this character's imperfection of personality through piggery. She's always eating something. In one scene, she joins the court as if she were that person you don't want to have next to you in a movie theater, bringing in a huge bag of snacks, gulping down red licorice and handing out bags of candy. If it's in front of her, she wants to put it in her mouth.

This functions as foreshadowing of her own death. In the climactic scene, she gulps down a glass of poisoned wine in spite of the demand by her husband not to do so. The wine is in front of her. She drinks it down. She dies. In the clownish context of this production, Gertrude's death makes more sense than in the traditional playing.

Admittedly, presenting some of Shakespeare's great creations -- Ophelia, Gertrude, the ghost, Laertes, and Horatio -- as slapstick comedians does violence to the concept of tragedy as envisioned by most directors, but the audience is there for the laughs rather than the tears.

The Four Clowns production of Hamlet relies on the audience knowing the Hamlet plot already. I don't think this is a problem. The people around me laughed and nodded. This might not be a play for a fourth grade classroom, but for the reasonably experienced theatergoer, it works. You might think of it as coming out of the modern cinematic tradition of cutting away all the extraneous bits and only giving the audience the most major plot points and a basket of clues.

If there is one legitimate critique of this approach, it is that the slapstick could have been done without doing it to Shakespeare's Hamlet. This won't matter to most, as the audience's laughter and cheers demonstrated. Purists may take offense.

One thing I'll say in praise of this approach. In Shakespeare's play, the main characters die of poisoning. The Four Clowns approach is to act out the effects of poison in a slightly over-the-top but believable way, unlike the traditional style where people simply nod off.

Last Saturday featured the annual Neighborhood Council Congress. It has developed a life of its own since council participants have taken over the planning and production. I was particularly impressed by individual conversations with ham radio operators and others who are trying to develop a sense of disaster preparedness among Angelenos. This idea will be developed at a future meeting of the Los Angeles Neighborhood Council Coalition (Lancc). I was also particularly impressed by a lecture on creating press releases and other material useful in public relations. I hope to have more on that in a future article.