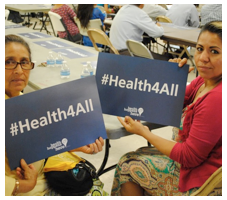 LATINO PERSPECTIVE-As we know, California has implemented a series of laws in recent years to help undocumented workers. Polls conducted by the Los Angeles Times show broad support for a pathway to citizenship for the approximately 2 million immigrants living in the state, although most immigrants from Latin America do not become citizens. That’s a discussion for another day.

But when it comes to extending healthcare benefits to immigrants, the story is a little different. According to a new USC Dornsife/Los Angeles Times Poll, California voters are strongly divided over whether free or low cost health insurance should be granted to those who are in the state without documentation.

The poll found that about 48% of voters believed that undocumented immigrants should be eligible to receive free or low cost health insurance through Medi-Cal or a similar program.

A statistically equal 47% said the group should not be eligible, while about 6% didn't know or refused to answer the question.

Backing for the benefit is split along ethnic lines, with 69% of Latino voters but only 39% of white voters in favor of this group receiving benefits. And it had an ideological cast as well: 68% of Democrats supported eligibility, yet only 19% of Republicans agreed.

Opposition was most passionate among supporters of Republican presidential candidate Donald Trump, 90% of whom opposed eligibility. Opposition among backers of other candidates ranked substantially lower.

As I said in previous columns, we still have a long way to go, and I understand those who argue that we should wait until these groups of immigrants achieve some kind of legal status. But we need to look at the numbers.

Which is more expensive: waiting for undocumented immigrants to get sick and go to the emergency room? Or doing the humane thing and providing them with some insurance, preventing them from getting sick and crowding our emergency rooms?

Let’s keep in mind that undocumented workers pay taxes and contribute to the welfare of our state.

Can someone please show me the real numbers? Then we can talk.

This is California, this is Los Angeles….

(Fred Mariscal came to Los Angeles from Mexico City in 1992 to study at the University of Southern California and has been in LA ever since. He is a community leader who serves as Vice Chair of the Los Angeles Neighborhood Council Coalition and sits on the board of the Greater Wilshire Neighborhood Council representing Larchmont Village.  He was a candidate for Los Angeles City Council in District 4. Fred writes Latino Perspective for CityWatch and can be reached at: [email protected]) Edited for CityWatch by Linda Abrams.