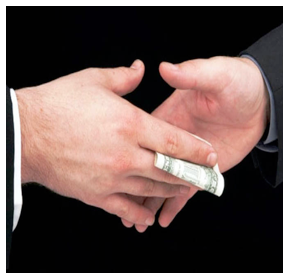 PAYOFF POLITCS--It is entertaining to watch the late-session gnashing of the teeth by the press corps, good government types and Gov. Brown about defeats for big efforts to make changes. Isn’t it terrible that the oil companies managed to neuter SB 350? Isn’t it terrible how the legislature and governor were stymied on finding a way to more road repairs? Isn’t it terrible how no one can fashion a deal and funding to pay for public health care?

And: isn’t it terrible about al l this money in the process that seems to be preventing bolder action?

Of course, the gnashing of the teeth doesn’t lead to reassessment. Or to questions. A big question might be: Where is all this money coming from that stalls big change? What’s new in the last few years that would make legislators, particularly the handful of more moderate members, less likely to go on?

The answer to this question is obvious: it’s the new “top two” system.

Top two has brought much more money into our elections and our politics. Candidates need more money to get noticed among the large lists of candidates of all parties that the top two system produces in the first round of elections. Then candidates need even more money in the second round to launch personal attacks on the other candidate -- someone who can be a member of the same party, even with similar policy views.

“Top two” remains controversial, but the fact that it’s put more money into the process, and made legislative elections more expensive, isn’t controversial at all. The huge surge of independent PAC spending is a direct product of top two. Indeed, listen to top two’s defenders carefully:  that spending, particularly on behalf of moderates, is what they wanted all along.

What’s fun about this week is that it’s all the people who have led the cheers for top two – again, the press, good government folks, the governor – who are gnashing their teeth about the progress the top two system has blocked. Gee, why do you think those moderate Democrats are so susceptible to the pressure of the oil industry on climate change legislation? Gee, why is it so hard to get legislators to tax tobacco or put fees on health insurance to pay for health care?

Is it because they’re going to need as much money as possible to compete and win elections in the top two system?

By the way, while good government folks and the press spent the last several years telling us top two would solve our problems, broader constitutional reform -- including removal of the 2/3 requirements on revenues -- was pushed aside as unnecessary and divisive. It seems kind of necessary now, at least if you want to rebuild roads, fund healthcare or accelerate California’s transformation to a greener economy.

But who wants to do any of that?

The theory behind top two is that it would make legislators bolder. It’s not working out that way. Top two means more money, and the need for more money makes cowards out of politicians. Which is why you see the legislature backing off this week.

(Joe Matthews is Connecting California Columnist and Editor, Zócalo Public Square, Fellow at the Center for Social Cohesion at Arizona State University and co-author of “California Crackup: How Reform Broke the Golden State and How We Can Fix It” (UC Press, 2010).  This column was first posted at Fox and Hounds.)  Edited for CityWatch by Linda Abrams.