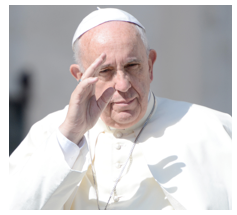 POLITICS-Meanwhile, back in the real world, most of us are just trying to live our lives, feed our families and pay our bills. That's what adults do--they take care of business, prioritize appropriately, and choose their battles well. Unfortunately, when we are led by those who've swung so far away to "serving God's work" about climate change we run into the same childish nonsense we've seen from others who "speak for God".

Whether we love or hate Pope Francis, we didn't elect anyone in Downtown or Sacramento to be another Pope--Economic, Environmental and Quality of Life issues properly dominate any elected leader's agenda, but we need not answer to any liberal Pope any more than any conservative Pope.

So while George Skelton notes that Pope Francis might as well be co-author of the bill that Governor Brown and the Legislative Leaders are ramming down our throats  (or trying to, at least) to reduce or even attempt to eliminate gasoline usage, the rest of us might be wondering how that has anything to do with ensuring a vibrant economy in our state.

What's that, you ask?  How could questioning climate change be tolerated?  Should anyone dissenting from Governor Brown's bill be tied up and burned at the stake as a heretic?  Perhaps condemned by the Church like Galileo?  Excommunicated from California for committing an unforgivable sin of opposing the tactics of a scientifically- and morally-"superior" elite in Sacramento?

Now that's an interesting conflation:  suggesting that Californian environmental policies that will do very little to help the environment, but which will destroy the middle class (particularly minorities and the lower middle class) in the process, is "anti-environmentalist".

1) But what if minorities and the remnants of the middle class are in agreement with oil companies that the Sacramento "gas attack" bill that Archbishop Brown and his fellow Bishops in the Legislature will help little, but hurt a great deal?

2) What if the electorate, including minorities and the middle class, learn what is already publicly-available knowledge--that there is more money collected to Sacramento per gallon of mega-expensive California gasoline than go to the profits of the oil companies?

3) What if educated Californians learn what is already public knowledge: that China, India and the rest of the Third World (which, to be fair, are fighting to no longer remain part of that Third World) are infinitely more responsible for our climate/environmental issues than California, and that placing California at a distinct economic disadvantage does little to nothing for Planet Earth?

4) What if Californians, of all political and religious and economic and ethnic backgrounds, all figure out that population control (particularly through the advancement of women's rights and economic opportunities), avoidance of overdevelopment, establishment of vital infrastructure and the like are surefire ways to help the Environment AND promote a solid Economy and Quality of Life?

Well, perhaps then we won't be excommunicated, condemned, burned at the stake or go through any similar economic/environmental Inquisition efforts being slammed into our lives from Archbishop Brown and the rest of the Church in that new Vatican City of the West:  Sacramento.

So here's a novel thought:  perhaps Archbishop Brown and the rest of the Synod in Sacramento should fix the budget, stop passing bills that hamper proper educational, transportation, infrastructure, planning and safety/security funding for cities and counties, and focus on cost-effective and scientifically-proven ways to help our Economy, Environment and Quality of Life.

And if we want to elect a new Pope in Sacramento, we'll be the first to let the political leaders and pundits know. Until then, why don't you all just do your jobs as Governor, Assemblymembers, State Senators, etc.?

(Ken Alpern is a Westside Village Zone Director and Board member of the Mar Vista Community Council (MVCC), previously co-chaired its Planning and Outreach Committees, and currently is Co-Chair of its MVCC Transportation/Infrastructure Committee. He is co-chair of the CD11Transportation Advisory Committee and chairs the nonprofit Transit Coalition, and can be reached at  [email protected]   He also does regular commentary on the Mark Isler Radio Show on AM 870, and co-chairs the grassroots Friends of the Green Line at www.fogl.us. The views expressed in this article are solely those of Mr. Alpern.)