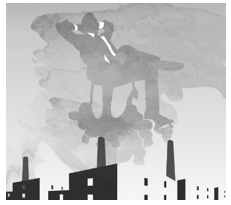 OTHERWORDS-If I had $17 million in savings, I’d take advantage of that financial security and retire early.

That’s the average total retirement assets of chief executives at the top 30 U.S. oil, natural gas, and coal companies, according to a recent report by the Institute for Policy Studies that I helped research.

And here’s some perspective: $17 million is 170 times the amount most people in the United States around retirement age have saved up.

Since most of these fossil fuel executives haven’t left their offices for their vacation homes, this figure begs a question: Why are they still working?

They surely aren’t working hard to secure a viable future for the rest of us.

Over the last 25 years, greenhouse gas emissions have steadily risen. Unless we change course and cut carbon pollution, the Earth faces a 10-foot rise in sea levels. The United States alone risks the destruction of land that’s home to more than 12 million people.

Most big fossil-fuel companies say that they care about the catastrophic effects of greenhouse emissions. Yet their actions show they aren’t putting their money where their mouth is.

Instead of investing in green energy technologies like solar and wind power as coal and oil become less profitable, most of corporate America has embraced fracked natural gas as “America’s new energy frontier.” What these companies don’t say is that natural gas can’t address the dangers of catastrophic climate change and reliance on fracking techniques poisons the environment.

The people involved in these harmful decisions are securing their own future with huge nest eggs.

It’s no wonder that Tillerson is working hard to keep this mantle. ExxonMobil awards him an annual bonus that depends on boosting reserve numbers. Last year, he pocketed $3.7 million this way.

In other words, energy executives are getting paid massive amounts of money because of and despite the damage they’re wreaking.

It’s hard to hold these executives accountable for the effects of climate change when their own future is secured by millions in retirement benefits. Even if they do their work poorly, they can leave their jobs knowing their nest egg will keep them safe.

It’s even harder to hold them accountable when these corporate leaders are actively encouraged to endanger the environment. Fortunately for everyone else, it doesn’t have to stay this way.

Many shareholder activists are finding ways to pressure fossil fuel companies and their executives to adapt their business models to stop stoking climate change. And a growing number of investors are divesting from fossil fuels altogether while actively putting their money into climate solutions.

Making fossil-fuel execs feel the heat could bring about a kind of security for the rest of us that they’ve already obtained for themselves.

(Daniel Valenzuela is a former Global Economy intern at the Institute for Policy Studies where he contributed to Money to Burn, a new report on executive pay in fossil fuel industries. This perspective provided CityWatch by OtherWords) Graphic credit: Eric VanDreason)