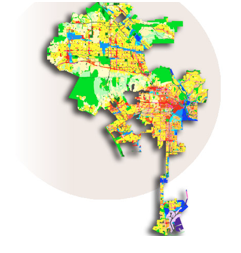 PLATKIN ON PLANNING-Proposals to update of the City of Los Angeles’s old 35 Community Plans – also called the Land Use Element of the General Plan or the New Community Plans – never seem to end. The updates are often cast as a cure-all to LA’s numerous planning ills, so, given these claims, let us take a closer look at what these updates entail.

A decade ago former Mayor Antonio Villaraigosa and former Director of Planning Gail Goldberg made the update of LA’s aging Community Plans a cornerstone of their broader approach to planning, and their successors still occasionally mention theNew Community Plans.

As originally conceived, 35 separate updates would take three years each to prepare and adopt.  Furthermore, City Planning was gearing up to initiate eight new Community Plans annually, which meant it would take eight years total to complete the entire process.  But, to date the City Council has only adopted one Update, for Hollywood, and its methodology and content were so slipshod that Superior Court Judge Alan Goodman rejected this Update, its voluminous up-zoning ordinances, its plan amendments, and its companion EIR. 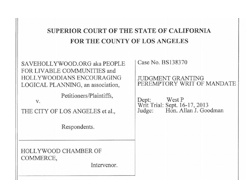 Since then, the City Council has not adopted any more Updates, although several are slowly winding their way through City Hall. One of the major reasons for these delays is the successful lawsuit against the City.  The City Attorney’s office presumably fears that another round of flawed plans would meet the same judicial fate as the Hollywood Update.

In response to these delays, the City Council’s little noticed LA 2020 Commission’s Time For Action report recommended that the City Planning Department update all 35 Community Plans.  Like most of the Commission’s recommendations, this proposal received little traction at City Hall. Instead, City Planning’s energy is focused on revamping LA’s zoning code through re:code LA in order to achieve the same Update goal: up-zoning much of Los Angeles.

One revealing aspect of such calls to update the Community Plans is the silence about other legally required but vintage General Plan elements, such as Air Quality, Public Safety, and Conservation. Why not also update the other outdated discretionary General Plan elements, such as the well-regarded General Plan Framework Element (1996, 2001), or the totally forgotten 47-year-old Infrastructure element (1968). Or, why not link the recently adopted Mobility (Transportation) element to the Community Plan Updates since mobility themes are the latest buzz at City Hall.

Why not call for new General Plan elements that other California cities already have adopted or are preparing, such as economic development and climate change?

My answer to all of these and related questions is simple: The only General Plan element that readily allows appendices that amend local zoning and planning ordinances is the Land Use element. This means that the ultimate purpose of the Community Plan Updates is not the many pages of splendid policies and goals for 1/35th of Los Angeles, but detailed zoning and plan amendments that increase local uses, densities, and heights. No monitoring programs or revisions of Air Quality, Transportation, Conservation, or Infrastructure elements are required to draft these zoning ordinances and plan amendments.

Other questions typically asked about the Community Plans also deserve a candid answer.

Why are the current Community Plans so out-of-date?  City Planning prepared most of the 35 Community Plans in the 80s and 90s. It is now 2015, and they should all be updated. But since they represent the local application of citywide General Plan elements, such as Housing, Transportation/Mobility, and the General Plan Framework, the sequencing is backwards.

The citywide elements need to be updated prior to the local elements. Furthermore, the professional standards of the City Planning profession are to update citywide plans on a ten-year cycle and local plans on a five-year cycle. By these criteria, LA is many update-cycles behind for almost every General Plan element, citywide and local.

Why, then, don't we have up-to-date General Plan elements, including the Community Plan?  The official reason is lack of staff, but there does not appear to be much interest in timely, comprehensive city planning among LA’s elected and appointed officials. This is because well-prepared, closely followed plans smooth out the bumps of the business cycle through zoning and environmental regulations.

Since real estate speculators like to move in an out of private projects quickly, they prefer a deregulated environment that gives way to their abrupt investment decisions. Since the institutional culture of local government in Los Angeles has fully absorbed their outlook, the City Planning units dealing with General Plan updates are perpetually under-resourced.

Take away lessons:  Now that the City Council has adopted the new Mobility Element, the best way to update Community Plans is to first update the other five dated General Plan elements. These updates should be based on current census data, not fanciful extrapolations that give the false impression that Los Angeles is on the verge of a population boom. In addition to updating the mandatory elements, the city should also prepare the two other optional citywide general plan elements that I previously wrote about: climate change and economic development.

With these in place, the City Planning Department could then prepare spectacular local plans.

(Dick Platkin is a former LA city planner who writes on planning issues for CityWatch. He welcomes questions and comments at [email protected].