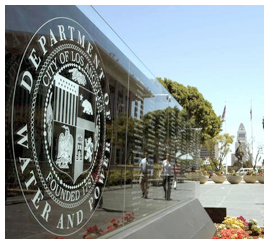 PERSPECTIVE-The local press has lately focused on one key controversial element of the proposed DWP rate increase, one which the Mayor, City Council and General Manager Marcie “D’Arcy” Edwards would rather not discuss.

That’s the 8% transfer fee and the utility tax (10% paid by residential users and 12.5% by commercial entities). Together they will absorb around 20% of the gross increase and direct it to the city’s general fund, where it will be used for anything other than upgrading the neglected power and water infrastructure.

While allowed by the City Charter, this practice is unconscionable and the transfer component may even be declared illegal by the courts.

In all, around $250 million per year for the last several years has been diverted from what would be a source of funds available to make considerable headway in long-overdue capital improvements. That alone makes the transfer morally unethical. It is like siphoning cash from your kids’ college savings accounts to buy a new car.

Yet the mayor, his allies and Marcie Edwards like to call the tax and transfer a dividend. They say we are the shareholders of the DWP. We are simply paying ourselves.

I know of no other dividend where the recipient does not have the right to decide how to spend it.

In a recent op-ed piece in the LA Times, Gregory Lippe (a Valley CPA) and Richard Moss (a former DWP Commissioner) suggested keeping the proposed increase free of any tax or transfer fee. This would allow the additional revenue to flow 100 percent to improvements.

The two gentlemen pointed to the mayor’s position that the increase has nothing to do with feeding the city’s budget.

Perhaps we should refer to it as a “supposed position” because the mayor has not shown any indication to end the levy on ratepayers’ payments.

It’s time for the mayor to show his true colors. Will he back Lippe’s and Moss’ very sensible approach?

Garcetti’s track record does not provide cause for optimism.

He has failed to make any reforms at the DWP. His pick for GM, Marcie Edwards, co-whined a letter with Brain D’Arcy defiling Ron Galperin’s audit of the out-of-control non-profit trusts, and she has yet to remove any manager associated with the costly failure of the billing system. It appears the DWP is on a path of business as usual – no accountability, no integrity.

Does this type of management warrant a 20% premium?

It is going to be tough enough assuring the increase will be spent wisely and used appropriately.

(Paul Hatfield is a CPA and serves as President of the Valley Village Homeowners Association. He blogs at Village to Village and contributes to CityWatch. The views presented are those of Mr. Hatfield and his alone. They should not be construed to represent the opinions of the VVHA or the residents of Valley Village, individually or as a group. He can be reached at: phinnoho@aol.com. ) Edited by Linda Abrams.