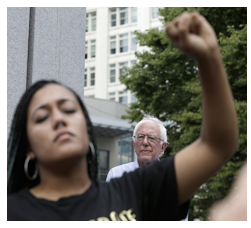 PERSPECTIVE-Bernie Sanders has energized voters like no one in recent memory save for Barack Obama. In a series of speeches addressing bigger and bigger audiences, Sanders has rocked the political establishment that dismissed him almost before he announced his intentions. While it is indeed exciting for progressives to embrace the thrill and “Feel the Bern,” a number of cautionary tales must be heeded. After all, President Obama’s “hope and change” campaign that excited so many Americans fell significantly short once he took office and failed to live up to expectations.

Which is why the tactics of the Black Lives Matter (BLM) movement are so important. Twice now, in Phoenix and in Seattle, members of the movement have interrupted Sanders’ events and been unapologetically firm about their demands. But the backlash from his supporters, upset at the public embarrassment of their favorite candidate, has been strong. From the very ugly audience responses in Seattle to reports of a fake petition   against the action to the vicious maligning of BLM activist Marissa Janae Johnson as a “radical Christian Sarah Palin supporter,” progressives have exposed their intolerance and shortsightedness.

Despite the denunciations, BLM’s activism has worked. Although he initially stumbled when confronted, Sanders has recently shown himself to be responsive to concerns of those who want racial justice to be front and center alongside economic justice. His hiring of Symone Sanders as his press secretary and the release of his extensive racial justice campaign platform have been significant steps in proving he is serious about the issue. In his speeches, Sanders has begun promising to end institutional and other forms of racism.

It is highly unlikely he would have spontaneously decided racial justice was important on his own. Like many white progressives, he mistakenly conflated economic injustice with racism, as if by addressing the former one can automatically solve the latter.

Still, he has a ways to go. His response to the press about the Seattle confrontation was less than graceful, for instance. “I am disappointed that two people disrupted a rally attended by thousands at which I was invited to speak about fighting to protect Social Security and Medicare,” he said. “I was especially disappointed because on criminal justice reform and the need to fight racism there is no other candidate for president who will fight harder than me.” Clearly Sanders is annoyed at being interrupted. But that is OK. Movements do not need to be liked. They need to be effective.

The BLM movement has, through its bold activism, attempted to educate voters as well as politicians on the importance of focusing on a racial justice political agenda. The public disruptions were aimed both at Sanders and his predominantly white audiences, because both seemingly have been blinkered when it comes to the life-and-death issues of police killings, mass incarceration, discriminatory unemployment and education, etc.

Critics have pointed out that BLM needs to go after Hillary Clinton rather than Sanders, who is far to the left of her on economic justice. Clinton certainly deserves the same treatment BLM has given Sanders. Emerging from the Democratic Party political machine, she has astutely wooed people of color, making speeches addressing criminal justice and hiring racially diverse campaign staff. She is banking on the faithful adherence of many communities of color to the mainstream Democratic Party. But given that so many of the nation’s “tough on crime” policies, which have disproportionately impacted African-Americans and poor people, emerged during President Bill Clinton’s tenure, she deserves just as much distrust. We need to demand that Clinton explicitly denounce her husband’s devastating legacy.

BLM has been attempting to do exactly that. In June, when Clinton clumsily retorted that “all lives matter” during an event at a black church near Ferguson, Mo., she faced instant backlash. One audience member, the Rev. Renita Lamkin, told The New York Times, “That blew a lot of support that she may have been able to engender here.” Twitter users later lambasted her, with one person tweeting, “Well she just locked down the racist white people who think they aren’t racist vote.”

In the meantime, there are 15 more months of campaigning, during which BLM activists will likely confront her on stage, as they have done to Sanders. The trouble is that Clinton has yet to organize major events open to the public. Her closed-door donor events (which are indicative of the insider track she is on in heading toward the Democratic Party nomination) have not been as easy for BLM activists to infiltrate. In fact, five activists attempted to interrupt her event in New Hampshire but were unable to get past security. Instead of saying she was “disappointed” by their activism, as Sanders did, she cleverly met with them privately instead. Julius Jones, one of the activists, said afterward, “What I feel like I got out of the meeting was to press her in a very real way and probably in a way that she hasn’t been pressed in a long time.”

What the BLM movement has also done is offer Americans a crucial lesson on the type of relationship that should exist between a political candidate and a movement.

At his Los Angeles event, which drew tens of thousands of people, one attendee told The Guardian, “Bernie Sanders is our savior. I always thought politics was vapid. I never really cared until now. Now we have hope.” That Sanders is seen by some of his supporters as a “savior” reveals the immature approach American voters take toward elections, as though political leaders are magical genii able to make all our wishes come true.

In just a few weeks, BLM has clearly demonstrated the necessary antagonistic relationship that needs to exist between the elected and the electorate. Social movements do not achieve change by supporting candidates. They set the political agenda and demand that candidates adopt their positions if they want to be elected.

The left has often fallen deep into the trap of wide-eyed sycophancy. Perhaps it is explained by our ever-hopeful desire to believe the best of all people. But we must adopt the cynicism of the right when it comes to politicians. Just as the tea party made a significant dent in Congress and state and local legislatures, progressives can and must approach political organizing in the same way.

Elections are not the totality of political organizing, although every four years that fact is lost on many of us. Elections take up so much space in our media diet and political discourse that the goal invariably becomes about electing one’s favorite candidate. And then the disappointment stemming from seeing an elected president break one campaign promise after another dilutes any leverage and kills hope in the political process. People walk away, throwing their hands in the air, feeling defeated. But it doesn’t have to be this way.

In just a short time, BLM has raised awareness of police brutality and related issues in African-American communities. Now the movement is influencing the mainstream political discourse in a way very few movements on the left have been able to do. We need to laud it, not denounce it. We need to emulate it, not shut it down.

(Sonali Kolhatkar is Co-Director of the Afghan Women's Mission, a US-based non-profit that supports women's rights activists in Afghanistan. This commentary was posted first at TruthDig.com)