WHO WE ARE-The buzz of voices fills a community center in Hollywood, as dozens of people slide into folding chairs. They include artists, teachers, designers, and they’re from all over the city: Los Feliz, Echo Park, Mid-City and Boyle Heights.

What they have in common is they’re all renters, and they've come to form a union led by renters.

“There’s a kind of culture in our society that says renters are somehow less than,” said Dont Rhine, one of the organizers. “Actually, we make up the majority of the people in this city. We pay for this city. We are this city.”

But Los Angeles has become an inhospitable place for low-to-middle-income renters. Much of the new apartment construction over the last decade has been higher-end. At the same time, landlords are turning older units into  condominiums, evicting thousands of renters in the process. When they go looking for a new apartment, they find rental prices are higher than ever.

Los Angeles has, by some measures, become the least affordable rental market in the country. And that’s pushed a growing number of renters to activism.

Renters are picketing outside buildings where landlords are trying to clear rentals to make way for condos.  Others are protesting the construction of new luxury apartments, drowning out speeches by the likes of Mayor Garcetti.

Those renters who’ve spent the last several months trying to launch the tenants union in Hollywood want to make sure renters’ issues stay top of mind. They plan to advocate for renters' rights at City Hall and build a fund for tenants who are evicted through no fault of their own. Leonardo Vilchis, who advocates for tenants in East L.A. and Boyle Heights, plans to lead protests for the union.

Angel Harper, an elementary school teacher from Hollywood, showed up at the meeting after seeing a flier in the lobby of her apartment building. She said a tenants union is badly needed in Los Angeles, where she feels renters don’t know their rights.

Harper is from New York, where her mother was a tenant’s leader. She said renters there put up more of a fight and have a support system.

“Every block area had tenant associations and tenant leaders, and someone you could talk to about your living situation,” Harper said.

One reason why Los Angeles may be trailing other major cities when it comes to tenant advocacy is because its urban population grew more slowly, compared to places such as New York and Chicago, said Jacqueline Leavitt, a professor emeritus of urban planning at UCLA.

"By the time LA reached over million people it was 1930, whereas those cities had grown faster and had to deal with urban issues sooner than that," Leavitt said. 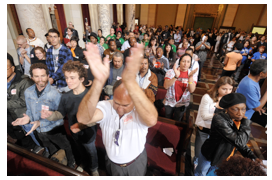 “We’re so spread out,” Gross said. “We have such an awful transit system, and getting tenants to places is very difficult, particularly getting them to City Hall.”

But Gross said renters are increasingly motivated to fight for their rights. He said rents are rising, but wages aren’t keeping up. So renters are spending more of their paychecks on rent — an average of 47 percent, according to a UCLA study.

Other renters have it worse. They’ve gotten eviction notices so their landlords can clear out the units and turn them into condos — allowable under a state law called the Ellis Act.

Gross saw the same thing happen during the real estate boom of the early 2000s. When the market went bust, renters got a reprieve. But now, several years out from the recession, Ellis Act evictions are again on the rise.

“This is nothing new, unfortunately," Gross said. “It’s Groundhog Day for me.”

This time around, those losing their apartments are fighting back. Steve Luftman, a freelance art director, is trying to stay in his rent-controlled building in Beverly Grove.

Its owner plans to level the building and put up condos.

“To find out one day you’re being removed from your home of the last 18 years is a horrible feeling,” Luftman said.

He added that when he first received his eviction notice, he didn’t know where to turn. But as he organized the tenants in his building, he started to hear about renters’ groups in other buildings such as the Villa Carlotta in Hollywood and another one on Rodney Drive in Los Feliz.

“There’s all these groups that should be talking together and are just starting to,” Luftman said.

The citywide tenants union is meant to tie all these groups together. Members first got together a few months ago, and have set their sights on LA landlords represented by the Apartment Association of Greater LA. 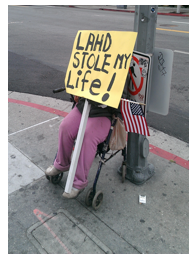 The association’s vice president, Jim Clarke says landlords are not the bad guys.

“We’re providing housing, but it is a business, and a lot of people don’t keep that in mind,” he said.

Clarke said it’s simple supply and demand: There are a lot of people who want to live in L.A. and not enough housing.

“Somebody’s going to come in and say: ‘I want this apartment, and here’s what I’m going to give you,” Clarke said.

Clarke maintains the only way to bring down rents is to build more units. But tenant advocates say not enough affordable housing is being built to keep up with demand. Nearly 19,000 units have been removed from the rental market since 2001 through the Ellis Act.

Other units, which are designated for low-income tenants, are expected to become market-rate apartments soon because the city's affordable housing contracts with those buildings eventually expire. About 15,000 affordable units could potentially be lost this way over the next five years, according to city estimates.

With so much of LA’s existing housing stock falling out, members of the tenants union say preservation should be a top priority.

Harper, the teacher from New York, said it was important for her to join the union. She isn’t in any danger of eviction, but said she wants to be ready if that day ever comes.

“I’m concerned about the future and things can change,” Harper said.

(Josie Huang writes for KPCC Radio … where this piece originated.)